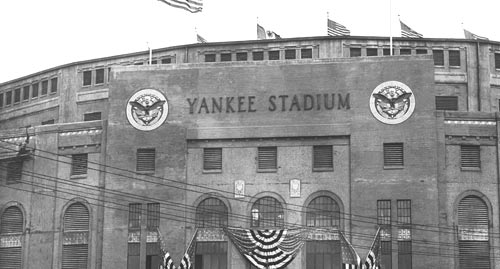 The new baseball structure going up in the Bronx may represent something strange in the neighborhood for the ghosts of Yankee lore. They may not so readily transfer their energy from the old rafters to the new suites and skyboxes.

With their lease on eternity at the old Yankee Stadium endangered, perhaps Ruth, Gehrig, DiMaggio and Mantle will opt to become free-agent spirits.

That is one theory.

Dominick Villella, who works for Paranormal Investigation of New York City, has grave doubts that the Yankee ghosts will change addresses.

” Babe Ruth’s energy is contained as a replay in time,” he said, “like a film loop that maybe could happen again and again — if conditions were right.” So, when the wind swirls and there is distant thunder, Ruth apparently has lived in the bats of Yankees who have hit dramatic home runs.

Villella said that bringing objects from the legendary players could contain energy to jump-start the new building.

“Bring over things that were associated with the players,” he said. “If they leave it at the old stadium, that energy will remain there.”

Monument Park will be relocated and the new stadium will have a museum with some memorabilia, but Yankee chief operating officer Lonn Trost has something of a satirical approach toward the subject, saying, “I have spoken to the ghosts and they will be coming with us. We have a vehicle to transport them, though you can’t necessarily see it.”

Trost said the current stadium has undergone many changes over the years and it did not seem to disturb the ghosts.

But there is another, more ghost-friendly thought. For those who worry about the spirits crossing over, 43-year old lifelong Yankee fan Mickey (named after Mantle) Bradley said the legends are packing their equipment right now. He co-authored “Haunted Baseball: Ghosts, Curses, Legends and Eerie Events” (The Lyons Press, $14.95) and concluded that for those who believe, the legends will follow into the new stadium.

Bradley asked Derek Jeter his thoughts on the ghosts of Yankee past and the current team member who is well on his way toward Yankee immortality, responded, “Tradition doesn’t change just because you move venues.”

Bradley never got to interview the hallowed Yankees ghosts, but has no doubt the loyalty of Yankees fans will induce them to follow the team across the street.

“When they say will the ghosts make the trip over, what they are really saying is will the team legacy that they love so much, will that great legacy remain intact even though the walls are coming down,” he said.

“To me, what it is all about is how much the people are loved and are so identified with the team, so the fans don’t want to let go of them. People don’t want to think they are not part of the team. I think it is a measure of how legendary these guys were and how much they are still trying to hold onto them to keep them part of the present, not just the past.”

That should bring comfort to the Yankees fans whose admiration for the legends has never vaporized.