In may of 2006, the city of Nuevo León, Mexico abruptly made it’s way onto the annals of the paranormal. Reports started circulating the Mexican press, as well as the web, about a strange UFO captured on video. Not a UFO in the sense of a “flying saucer”, but a UFO in the true meaning of the acronym. An Unidentifed Flying Object. The video and a short story can be found on a previous post I made.

The video shot by members of the “OVNI club de nuevo leon” (UFO club) shows what appears to be an object or entity hovering above the mountains of Nuevo León. The object appears to move in parallel with the mountain top in a straight line. The Mexican press was quick to erroneously (in so many levels) call this a witch. Reports of “The witches of Monterrey” spread through the media. As the press moved in on the town and it’s inhabitants, they started to get reports of face to face encounters with these so called “witches”.
Two reports that made headlines were that of two police officers that had a close encounter with these beings. Officer Gerardo Garza from the town of Santa Catarina reported seeing two beings that resembled the stereotypical witch most people think of (cape or hat with long fingernails flying on a broom). Officer Garza reported that while on a routine check of an abandoned area, he encountered these 2 entities floating around a cemetery that was yards away. The Officer described them as being female and covered in what appeared to be plumage.

A more terrifying encounter was reported by a second officer from a different district. Officer Leonardo Samaniego of Guadalupe reported being physically attacked by one of these beings. Officer Samaniego (visibly shaking in the video right after the encounter) claims that while on patrol in his vehicle, the entity fell from a tree and onto the hood of the vehicle. The officer describes the entity as having female traits. He also describes as it having large eyes and dark skin. Wearing what appeared to be a cloak. He then claims that the entity placed it’s hand on the windshield and after that point he passed out. He only remembers waking up in his patrol car. Shirt and vest disheveled. He called in for backup and medical assistance. Camera crews were there to capture the aftermath. 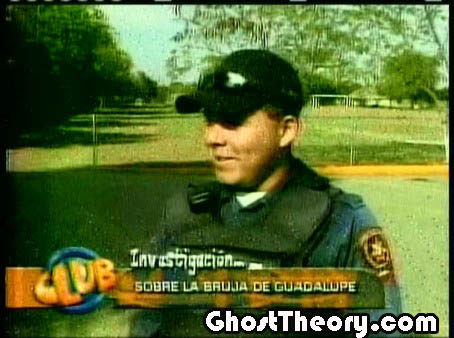 Typically I would be inclined on labeling something like this as mass hysteria or a hoax. I mean, witches? really?
I managed to interview one of Mexico’s most prominent Ufologist Ana Luisa Cid.

She’s a well renowned Ufologist that has been featured in countless facets of the media. She’s also been featured on the History channel. The following is an interview between Anna Luisa Cid and myself. The interview was done from a skeptics perspective. Done in spanish and translated, this is the first in-depth interview of the “Flying humanoid of Mexico” case.

GhostTheory: The presumption of the newscasters and the general public seem to suggest that these objects are “Witches”. With capes and brooms that fly around the hills of Monterrey. A little bit absurd and irresponsible on their part. Witches or wizards for the most part, are are practitioners of certain religions; main one being Wicca. A religion based on elemental forces and certain deities. In your expert opinion, what were these object that were captured on video?

Ana: In my opinion, this is a unidentified flying object. I coincide with you that it is risky to say that it’s a “witch”. I should also say that in Mexico, they also call orbs of fire that are seen in the hills, brujas (witches).

GT: The members of the UFO club of Nuevo Leon were the first witnesses of these objects. The club’s members recorded the images that now run all over the web. What is your relationship with the club’s members? How credible are these people? (individually and as a team)

Ana: Personally I know three of the members: The director and founder of the club, Diana Perla Chapa. The sub-director of the club, Jeronimo Flores, Esquire. I also know one of the coordinators Tomas Amador, Esquire. All of them are professionalist, very respectable en society and in the UFO medium in Mexico. Here I can say that the OVNI club of Nuevo Leon has more than 10 years functioning and have been know for their total credibility.

GT: Have you interviewed any other person outside of the UFO club? like the officers involved or a civilian that has seen this entity?

Ana: I have only interviews the aforementioned people. I have not had the opportunity to travel to Monterrey to meet the officers in the case that you and I are pursuing.

GT: What type of of medical and/or psychological exams were administered to the officers? Any new reports that you have encountered?

Ana: I don’t know the extent and precision of the studies that were done to the officers. I do know that Mr. Leonardo Samaniego did pass the psychological exams as well as the toxicology exam. meaning that the young man is in a healthy condition and was not under influence of any narcotic. Officer Samaniego still works for the same district.

As for new reports, although the media did not cover this, The UFO club of Nuevo Leon Lo nuevo, did do their own interview of the officer that was involved in the physical attack.

Diana Perla Chapa did produce the audio/visual interview of Mr. Samaniego. Let me give you the lesser known points in this case:

a) Leonardo Samaniego affirms that when the “entity” fell onto his patrol vehicle, radio transmission was lost. He did managed to call in for help, but did not hear the communication, he did not know if the call was received. Before fainting, he did notice that the lights on the patrol car and siren were functioning. So only the radio frequency was lost.

b) The officer claims to have seen the lines, or wrinkles in the strange entity as it leaned on the car’s windshield. He said that it had very long fingernails that resembled claws.

c) The investigator Jeronimo Flores asked the officer if he then later had any physical problems or any dermatological problems after this encounter, for which Samaniego only answered that he did lose weight do to being frightened over this encounter. Meaning that he either fell in a depressive state or was in state of shock for the next few days.

d) Upon questioning if his patrol car showed any signs of the attack on it’s hood or windshield, officer Samaniego said that he did not know. That he never received his patrol unit back. (Police unit 014). He know works on a different vehicle.

e) The police officer did make a (crude) sketch of the “witch” he claimed to have encountered. Making it quite clear that it did not resemble the flatwoods monter, like some reporters erroneously reported. 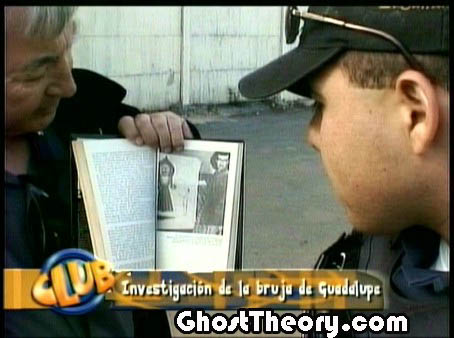 Drawing shown to Samaniego of the Flatwoods monster

f) The description of the entity is as follows: A woman, between 30 to 35 year of age and about 6 feet tall. She wore dark or black clothing, with a hood. The hood seemed to have a point hanging back. The female entity had complete black colored eyes and floated about with no visible artifact.

g) Jerónimo Flores visited the place where these events transpired. He reported that the tree was indeed dried up like the media claimed. 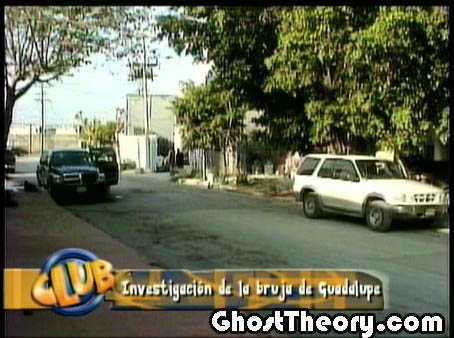 Incident where the encounter took place

h) Diana Perla Chapa, in an interview that was done by me last year, added that the officer’s uniform was disheveled. The officers shirt and bulletproof vest were unbuttoned. They (UFO club) do not know what really transpired that night. They do know that Officer Samaniego is not lying and did encounter something out of the common that night. Diana did mention that the officer’s clothing was taken by some outside agency and was never heard from again.

GT: Do you think that the entities that were seen by both the officers are related to the object that was captured on film? or do you think that this might be a case of mass hysteria from the inhabitants of the town?

Ana: I think that the possibility is there, of it being the case that it was the object captured on tape or that it was mass hysteria. the only thing in common is that both are hard to explain (or dispel).

Definitely I dispel a case of mass hysteria for the following reasons:

a) An imaginary object is not recorded on film, nor it produces over 40 witnesses.

b) It would be a strong coincidence that both civilians and government agents both manifest this object in their collective memory.

c) Officer Leonardo Samaniego continues to work for the same district, noting that he is a healthy person physically and mentally.

d) It’s not the first time that a phenomenon is seen in by various in the same region.

e) The UFO club of Nuevo Leon, has more than 10 years of prestige and would not risk tainting their name or credence for an event that would be remotely false. They are always open to new explanations.

I should mention that when they recorded that flying object, the group was not set to capture “witches” on tape. They were holding their monthly meeting that they have every month, for the past 10 years. That Wednesday was not an exception.

The majority of the members were outside the house. They were cleaning and setting up the place for the meeting. That’s how they spotted the object floating about the hills.

Only two members had video cameras. Jose Villareal and Diana Perla Chapa. Both recorded the events, but Jose Ramon’s was the most stable and revealing one according to Diana.

In conclusion, from my professional point of view, both cases are real. From officer Samaniego’s experience to the UFO club’s video. I do not believe the entity to be a “witch”, but I do know that it is something that we cannot explain. So the question still remains up in the air.

GT: Is the club now out there trying to capture new evidence? have they investigated the town or the cemetery to try to find out what could these entities be?

Ana: They (Club members) continue their activities. They continue their investigation trying to get new evidence. Of course they’ve been all over town and have even obtained opinions from pilots and aeronautical experts. They are trying to find an explanation for that strange object they taped flying over the hills that afternoon of May 17th. They cannot find the explanation. When they do manage to produce any new evidence of find the cause of this, they will disseminate the information, don’t doubt it…. 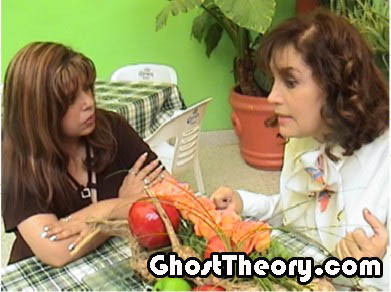