Friday, May 30th. Denver Colorado. There was a stir in the media by late afternoon. Low key news articles started to pop-up all over the web with headlines reading ” Alien video” “Proof of aliens: video”. There was a very private, and restricted, media conference made by a man named Jeff Peckman. A man who promised to show definite proof that aliens exist. Like a dam which had sprung a leak, news agency got wind of the possible proof and started reporting trickles of updates as the conference developed. Video evidence of an alien peeking through a window in a Denver home. Recorded by a man named Stan Romanek. Then CNN and Larry King broke the news. Soon it was all over the news and web. The dam had cracked.

Let’s rewind a bit.
In early 2003, I remember reading about a man in Denver, CO. who reportedly has had years (since age 5) of contact with alien beings. His name is Stan Romanek. A father, a husband and a target for extraterrestrial kidnapers. Mr. Romanek’s case is well known throughout the UFO community. It’s been investigated by countless researchers. He’s been interviewed by countless reporters. Mr. Romanek is back in the news again. He apparently used a video camera to try and catch a peeping tom, he believed was spying on his teenage daughters. Setting up the camera to point to a window. He left it filming over night. What he captured was not a pervert, but an alien. Possibly a perverted alien. This was captured in 2003.

Enter Jeff Peckman. Mr. Peckman has had a long history in the city of Denver. Back in 2003, he authored the “Safety Through Peace” ballot. Which urged the city to explore stress-reduction techniques. It failed. Now, Mr. Peckman is back and has a new ballot in which he wants to “create a responsible, common-sense strategy for dealing with issues related to the presence of extraterrestrial beings on Earth”. a.k.a Wasting tax payers’ money.

How Mr. Peckman gained control of the video and the rights of it, I have no clue. Maybe Both him and Mr. Romanek have an agreement. Remember back in in late 2006, when Loren Coleman from Cryptomundo helped debunk the Johor hominid?
How the greedy “scientist” Vincent Chow did not want to release photographic evidence that would prove that a some unknown hairy hominoids existed in the jungles of Johor. They both wanted a book deal first, and would release only sketches of the creatures only to the media. They said that the photographs were to be released in their new book. Hoping to make money of this. Not very scientifical. Turned out that the pictures were fakes. Vincent Chow was duped into believing that someone had actually photographed unknown hominoids. The dust settled in the Johor case, and there was a shamed scientists left to teach others a harsh lesson about greed.

Mr. Peckman appears to be a new student yearning to be schooled on this lesson. Holding off any “proof” he and Romanek have until they complete a documentary on this. Obvious that they want money for Romanek’s claims. Mr. Peckman claims that the alien in the video is so real, that it would take thousands of dollars and hundreds of hours for a hollywood studio to recreate something similar to what Stan Romanek has captured. Well Rockymountainparanormal.com has created a fake video to show the world that it only takes less than $100 dollars and some spare time to create something so “elaborate” like the Romanek video. Here is their version of it:

Let’s not forget about Mr. Romanek. The man who claims had contact with aliens since being a child. His website is cluttered with pictures of “UFOs” “Orbs” and mathematical equations that are thrown together to make them appear complex. Romanek claims that the equations came out in one of his hypnotic regression sessions. In fact, other claims of contact with human/alien/dog looking female things are on his website: 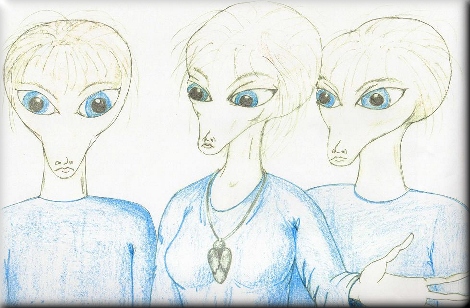 Another incredible claim by Mr. Romanek is that during his alien abductions, he learned of a new element. Element 115. Something he claims he had never heard of before, and was not “discovered” till years later. Well, it has been mentioned before. In fact, it’s been mentioned in the UFO community long before Mr. Romanek’s claim. Bob Lazar has claimed for years that he was one of the few chosen scientist to work on reverse-engineering an alien craft in the depths of Area 51. Lazar has claimed before that the craft that he and his team examined used Element 115. From his website: “The reactor is a closed system which uses the Element 115 as its fuel. The element is also the source of the gravity-A wave which is amplified for space/time distortion and travel.”

Who do we believe? Should we even believe any of these people? What Cryptozoologist/Ufologist/Paranormal researcher withholds possible evidence to make money? There’s a lesson to be learned from the Johor Hominid case. Information should be free.