One natural contender for the cause of Bigfoot sightings is the Grizzly bear. What happens when you see both at pretty much the same time? 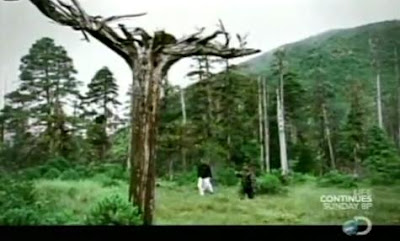 Editor’s Note: This is a post by Bigfoot Evidence contributor Vicki W.

Check out this excerpt from the documentary Monsters and Mysteries In Alaska, a Discovery network special from 2010. The focus of this segment deals with stories from Alaskans regarding the presence of sasquatches in the immense wilderness of the state. The first half of the video gives us an account from an eyewitness, and the last examines the peculiar phenomena of 1000 pound cedar trees that have been driven several feet into the ground root side up, rumored to be the work of sasquatches according to Alaskan natives.

The clip begins with the account of Thomas Fisher, a local fisherman, who witnessed something strange on the shoreline from his boat. He and his deckhand observed a large grizzly bear on the beach for several minutes, seemingly oblivious to the two fishermen in their boat one hundred yards from shore. Suddenly, the bear alerted as if sensing danger, and then fled from the beach. The men were perplexed. What could have spooked Alaska’s apex predator? Fisher describes a massive hair-covered creature walking out on the beach which he believes was a sasquatch.

About six minutes into the video, a local native points out the inexplicable inverted cedar trees. According to tribal elder Al Jackson, the trees are the territorial signature of “big, black gorillas” that live in the mountainous areas of Prince Wales Island. The 1000 pound cedar trees were first noticed in this position in the 1940’s and do not show the tell-tale markings of logging equipment. They have been driven into the ground upside down with considerable force.

This documentary features the uniquely gifted narration of Peter Thomas, who some may recognize from the series Forensic Files, one of the better true crime television programs from the network Court TV, now known as Tru-TV.

There are limits to the effectiveness of lie detection equipment, the main one being that if you believe what you are saying it will not detect a lie. To the speaker what they say is not a lie, but neither does that make it true. What was seen that day? If food is plentiful a bear will generally not fight over it. If it is outside its normal territory it might move along if disturbed. Animals are unpredictable.

For those of you interested in evidence or debunking of Bigfoot, look here for plenty of good material coming soon. I will be attending the upcoming Pacific Northwest Conference on Primal People in Richland Washington this weekend and be bringing you reports in as timely a fashion as I am able. Hopefully I will be able to post from the conference, but if not I will certainly bring home lots of stories and pictures and post them here for your reading and viewing pleasure.
I might even be able to work in some video.

Among the notables speaking at the conference will be:
Bob Gimlin, of the Patterson/Gimlin film fame, the first and to date possibly still the best evidence of Bigfoot.
Dr. Jeffrey Meldrum who has been kind enough to comment here at GT from time to time.
And Dr Melba Ketchum, DNA expert and hopefully planing on disclosing her results from recent samples.

I am looking forward to the event and bringing first hand accounts to you.