Cryptids In Your Own Back Yard I found this story by from my old stomping grounds in Pennsylvania. No stranger to cryptids, Pennsylvania has been host to Thunderbird sightings, in close proximity to the Jersey Devil, the Broad Top Serpents, the Lake Erie sea monster named Bessie, numerous black panther sightings (thought extinct regionally) and many others.
Thanks to Lon Strickler for his kind permission to bring this report to you from his site Phantoms and Monsters about a recent sighting of the Conewago Phantom. 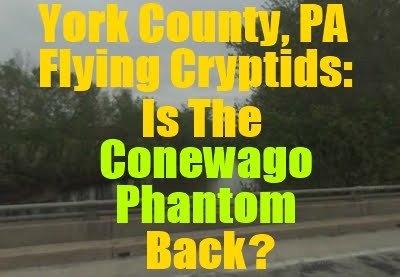 I recently received the following email which I will post unedited:

I saw a flying ‘something’ during the evening of April 29th around 7:50 pm as I was driving north on Harmony Grove, Rd near the Conewago Creek crossing. I noticed something fly straight up into the air from behind the trees on the creek bank. It shot straight up just at tree top and spread its wings and flew east towards Pinchot State Park. It was not a bird – just too big. I don’t know what it was but I’d say it was about 10 ft high and had wings like a bat. I didn’t notice a head or tail. It was black in color. No feathers. I searched Google and your story came up. I didn’t know about the Conewago Phantom sightings. I don’t know if it was that thing. I did find something like a large bird seen north of York back in 2006. I found some photos on Google Maps of where this thing was seen by me. Any idea what it was? Thanks – Jim S., Dover, Pa

The witness had scant information to add to the original email other than he was sure that this was not a bird. He mentioned that it was a bit overcast but he thought he got a better contrast of the creature because of that. I’m starting to wonder if the increased number of large bird-like creature sightings reported throughout Pennsylvania are connected somehow. Other researchers, namely Stan Gordon (Stan Gordon’s UFO Anomalies Zone) and Rick Fisher (Paranormal Society of Pennsylvania), have been receiving similar reports.

I found the following newspaper article published by the York Daily Recorder, York, Pa on June 19, 2006, It detailed a supposed sighting of a large bird-like creature at Brandywine Crossing in Manchester Township, York County, PA. I didn’t know about this sighting…I think this is the incident that Jim S. referenced in his email:

Pat Grether is a skeptical person. The 53-year-old mother and grandmother doesn’t believe in ghosts or goblins or monsters or UFOs or aliens or Bigfoot. As far as she’s concerned Elvis is dead, and the Loch Ness Monster, infamous legend of her native Scotland, is a myth.

She’s not crazy, nor does she drink or partake in the kinds of substances that would result in a person seeing a huge, scary bird in her backyard.

Her dog, a 6-month-old chow named Bear, was in the backyard of her home on Leaf Street in Brandywine Crossing in Manchester Township. Beyond the fence is a grassy hill, home to a bunch of groundhogs. She has no neighbors to the back of her house.

It was about 10 when she heard Bear yelping and barking and generally carrying on like a bird large enough to carry her away had landed just on the other side of the fence.

Grether went outside to see what the problem was. It sounded like something had frightened Bear, she said, something big, scary and weird.

Pat saw it as soon as she walked out the door. At first, she thought it was one of those big kites kids sometimes fly in the field. But it wasn’t.

It was a bird.

If that’s so, it was the avian equivalent of an Escalade.

Huge doesn’t do it justice.

Most striking was the bird’s size.

By her estimation, the bird had a wingspan of 18 to 20 feet.

Considering that California condors – the largest bird in North America, which, of course, is not native to this region – has a wingspan that approaches 10 feet, that’s a lot of bird.

The huge bird perched in the field, just beyond her fence.

“I was shaking,” Grether said. “I was scared to move. It takes a lot to scare me. Nothing scares me. But this did.”

Bear, brave creature that he is, crouched behind her. “Bear was scared to death,” she said. “And chows aren’t scared of anything. They hunt lions.”

She froze, and after what seemed like a long time, the bird took to wing and flew off toward the south, toward York.

Then, she went inside and called her husband, Glenn, to tell him that she wasn’t crazy, but she had just seen a huge bird behind their house. Her husband didn’t think she was crazy. If she said she saw it, she saw it.

She and her husband later checked the Internet and couldn’t find any birds that resembled the one she says she saw. She has her video camera charged and ready to go in her kitchen in case it comes back.

And it was huge bird, bigger than any bird native to these parts.

Francis Velazquez, a naturalist at York County’s Nixon Park, said he’d never heard of a bird that big. He said it could have been an immature eagle or a vulture, but neither of them have wingspans of 18 to 20 feet. A full-grown eagle, he said, may reach 9 feet, but that’s about as big as it gets. He said sometimes, particularly with people not familiar with birds, it’s difficult to judge a bird’s size and wingspan.

It wasn’t a monster, Grether said. It was a bird.

And she hopes someone else saw it.

“It’s impossible for a bird that size to be around and nobody else see it,” she said. “I just want to know if anybody else saw it.”

She hopes it won’t become the York County version of the Loch Ness Monster.

Which she doesn’t believe in anyway. 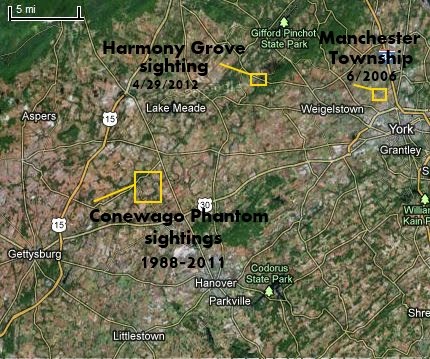 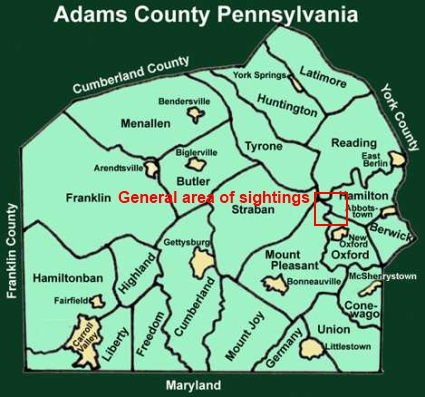 The email I received in reference to another winged humanoid sighting in northeast Adams County, PA (edited for spelling):

Sir – on Sunday, May 8th at dusk I was traveling east on Hunterstown Rd. Rt. 394 towards Hampton, PA. Just before I started to cross Conewago Creek I plainly saw a large creature with wings fly over the bridge in front of me. It was about 100 ft. in front of the car. The creature was dark in color and was as big as a full grown adult human. I looked in the direction in which it flew but I lost sight of it. I asked a neighbor (I live in Hampton) if she had ever heard of anything like this. She said there was a rumor of a sighting near the Boy Scout camp a few years ago. I searched the internet and found your story including the second sighting near Dick’s Dam. Have you determined what this thing is? Is there a chance that it could hurt anyone? I appreciate your time. Eileen 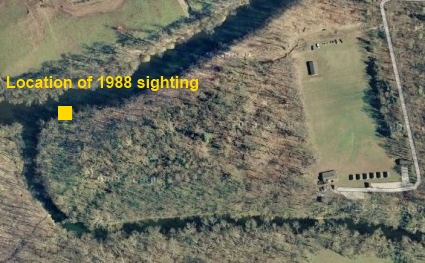 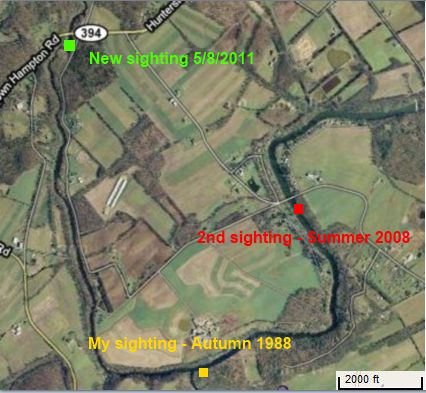 There was another sighting reported at Camp Conewago in 2008 but a specific location was not determined. There have been 4 reported sightings in an approximate 8 square mile area to date.

The first inquiry I received after I described my encounter near Camp Conewago was in 2008. I received an email from a man who lived a mile or so downstream from this incident (near Dick’s Dam). He stated that he caught sight of ‘something big’ and had heard similar screams for many years and that the frightful sounds continued to this day.

A Boy Scout leader also emailed me approximately the same time and wanted to tell me that while camping at Camp Conewago, a few of the boys in his troop had witnessed what they described as a ‘dragon’ that was 6 foot tall with wings and a tail….but looked like it had fur or feathers. He said that the boys seemed serious but thought they were ‘showing off’ and dismissed their claims until later when he read the account of my experience. He never stated where the sighting took place in the camp area.

Since that time, I have continued to check up on the area to see if anything strange develops. The Native American folklore and stories from settlers who inhabited the area offer several possibilities as to the identity of this cryptid but to date, I have not been able to make a plausible theory as to what is being heard or seen. 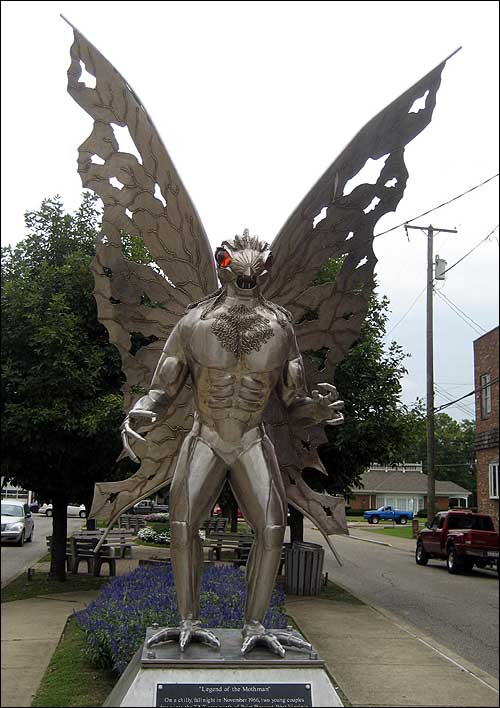 And by those descriptions I find both equally implausible. Both are said to rise straight in the air before opening their wings which begs the question, what form of propulsion are they using at that point?

I am sure we would love to hear your stories right here at Ghost Theory.