At one time we were all relatively small monkey people (that is to say if you believe in evolution) just starting to wander away from the safety of the trees. We learned to walk upright because it gave us a better view of the surroundings and more warning of the approach of a predator, in which case we could also more handily run back to the safety of the trees. The slow ones did not make it.

Take this how you will: Either we created religion and formed a belief in gods based on the deepest part of our racial memories, including those of running for the safety of the trees, or we were all created in one way or another by some higher power. In the case of this article I have to go with Christianity simply because the major players involved are from western culture where Christian faith dominates. Feel free to object.

Throughout the history of humanity we have searched for meaning to existence and found two things: religion in one form or another, and alcohol. It happens everywhere, to everyone and evolves from there. Because there are a number of well established religions does not mean that process has stopped any more than the process of evolution has stopped. From day to day we only experience a tiny temporal cross section of events that take hundreds and thousands of years to manifest so to us they may seem stagnant, but whatever currently influences our thinking finds its way into our belief structure. New ideas are either fitted into old ones or replace the old ones. Today that influence seems to be UFOs.

Blog about all things Fortean. News, Reviews and Info will follow daily or semi-daily examining Fortean phenomenon and topics 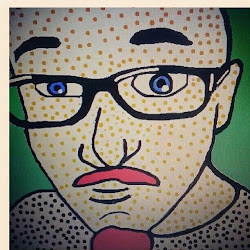 Demonic UFOs
Alternatives to the ETH are always really interesting to me. If you’ve read this blog at any time in the past you are likely aware of the fact that I’m always looking into different explanations for the origins of the UFO and its occupants. The Cryptoterrestrials as proposed by Mac Tonnies, Jacques Vallee’s theory of UFOs as some form of psychosocial control, and John Keel’s Ultraterrestrials are all different avenues that I have looked into and spent a lot of time reading about. I’ve dedicated an equal amount of time blogging and writing about each of these alternatives in the past as well. However there is one area that I’ve only done a little bit of reading and research into; the idea that occupants of UFOs are demonic in the Judeo-Christian sense. The reason for this is that I really find the theory a bit too limiting and it feels a little like some confirmation bias is going on.

Still in the interest of fairness, and to not exclude any idea, I began to read a recent thread on ATS that delved into this topic. And with a title like Secular Researcher’s Findings that UFO Activity is not Extraterrestrial in Origin, how could I resist? Likewise in the offline world I had a bit of synchronicity with this topic which I will go into a little latter in the post. But first let’s get to thread from ATS. In the interest of fairness I feel that I should state upfront that I definitely do not agree with the posters conclusions. I feel that he’s grasping at too many disparate pieces in order to tie his theory together and don’t personally accept this theory. However I am bringing the information to you attention because I don’t think there is anything wrong with entertaining an idea. And I figure you should never shut your self off to any avenue.

The poster went through a lot of work in order to gather together the information necessary to formulate their thesis that the UFO phenomena and Alien Abductions are merely demonic deceptions meant to present a new gospel and cause people to turn away from the Judeo-Christian faith. They came to that conclusion based on couple of things; people that experience the UFO phenomena, especially Alien Abductees, typically end up experiencing psychic phenomena, many early UFO researchers, such as Jacques Vallee and John Keel, had come to the conclusion that the answer to the UFO was not the Extraterrestrial, and finally that the galaxy is just too large for the prospect of interstellar travel to be anything more than just a pipe dream. With these things in mind, the poster ultimately states the following as their final assessment of the situation;

The Facts of what we know to be true:
1. Aliens are inter-dimensional/Spiritual beings.
2. They do not use interstellar travel.
3. They are malevolent.
4. Their aim is to deceive man-kind.
5. The film industry is helping to prepare us for a “grand deception”.
6. “Alien Abductions” stop in the name and authority of Jesus Christ
7. “Alien Abductions” match the abilities of fallen angels as described in the Bible.
8. “Aliens” bring primarily deceptive anti-biblical messages, as is reported by abductees and contactees.

“extraterrestrials” are intentionally evangelizing people to an alternate spirituality(new age)and are demonic in origin.

I will let that information stand on it’s own. Again I don’t believe that this is what is going on. I do recommend that you check out the thread for yourself because there is some great debate that is going on back and forth from both sides of the argument. I appreciate that this poster is willing to acknowledge that UFOs seem to encompass many paranormal events, but I don’t agree with the conclusions that he reaches. Interestingly enough he is not the first person to reach this kind of conclusion. Writing in his 2010 book, Final Events and The Secret Government Group on Demonic UFOs and the Afterlife, Nick Redfern tells the story of a group comprised of Government officials called the Collins Elite that eventually reached the same conclusion.

The group studied the phenomena by interviewing UFO witnesses and alien abductees, the Collins Elite would eventually leave the ETH behind completely in favor of a very dark, and demonic view of the phenomena. In a very short summary the group believed that the UFO was just the latest way for this dark demonic force to deceive our species for the purpose of gaining access to our souls so that the demonic enemies could quite literally harvest some kind of unknown energy from it for purposes that were unknown and not well understood.

I would definitely recommend reading Final Events in order to get the whole story on this strange group and the even stranger conclusions that they came to. Once again I don’t necessarily agree with the conclusion that the Collins Elite came to about the provenance of the UFO, but for argument sake we don’t really know enough yet in order to rule anything out completely. Many in the Collins Elite felt that perhaps we were being farmed in some fashion and I can’t help but to be reminded of Charles Fort classic quote: “The Earth is a farm. We are someone else’s property.”

Ah yes one last thing before I leave you; I had mentioned that I had a somewhat synchronistic incident involving this whole ‘Aliens=Demons’ meme this past week. This past weekend my girlfriend and I were at our local Books-A-Million and as is typical for me I headed over to the ‘New Age/Paranormal’ section to kill some time. The first book that I happened to pick up was Phil Imbrogno’s Ultraterrestrial Contact which, despite the controversy from last year, I still intend to read. As I was thumbing through, looking at the chapter headings, I found a tiny little square piece of paper which someone had stuck in the book. 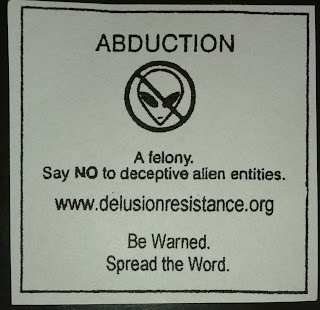 Intrigued by what sort of person would put one of these in a book, I decided to visit the website from the paper on my phone. Unfortunately my phone had a really bad signal and so the website was taking a while to load. As I waited for it to come up I wondered if any other books contained a similar paper or if I had some how grabbed the “lucky” one. I checked something like 15 or 20 books but only found similar papers in four of the books. There were three variations of the message on them. The books I found them in were interesting, because personally I don’t know if I would of picked the same ones had I been intending to spread this kind of message. I found them in two Zecharia Sitchin books, There Were Giants on the Earth and TheWars of Gods and Men, and the last one was in Jim Keith’s Casebook on the Men in Black (which I reviewed here). In any event they all lead to the same website, http://www.delusionresistance.org. 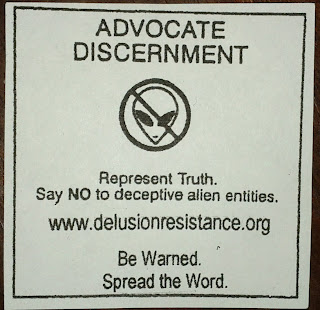 Delusion Resistance is run by a former MUFON investigator named David Ruffino. You can read all about him at the site. As I said I had a very synchronistic feeling when I saw these papers because I was thinking about the ATS thread, trying to write this blog post and just generally gathering my thoughts together. And what should happen but I come upon these papers. It may not mean much to others, but it certainly struck me as interesting. That’s all for now, again I recommend that you head over and read the thread and draw your own conclusions. Don’t let what I or anyone say influence what you decide or conclude. Also be sure to check out Nick Redfern’s Final Events as it’s a very fascinating read about the Collins Elite. You can listen to Greg Bishop’s interview with Nick Redfern on this topic here. Until next time I will leave you with a quote that I feel is relevant to this topic.

“The UFO manifestations seem to be, by and large, merely minor variations of the age-old demonological phenomenon…”
-John Keel

I am not here to claim the Bible is all about fear, but there are many references and depending on who you talk to, it is a major element.
Psalm 111:10 says “The fear of the Lord is the beginning of wisdom; all those who practice it have a good understanding.

Proverbs 1:7 says “The fear of the Lord is the beginning of knowledge; fools despise wisdom and instruction.”

What other effect could quotes that equate the search for knowledge or attainment of wisdom have on a species with self awareness and a curiosity that leads them to the exploration of space. Even if you are not a Christian or a member of any other religion, the message is everywhere entering our politics, entertainment and information media. Even if all you are is just an upwardly evolved monkey person, still on the lookout for predators with one eye on the perceived safety of the trees, the anticipation, and perception of the unknown brings us fear.

It always seems to me there is a “chicken and the egg” element to this sort of story.