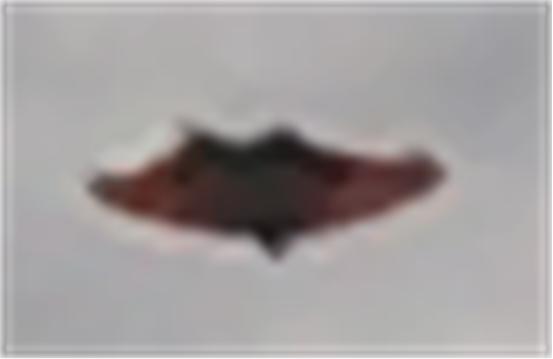 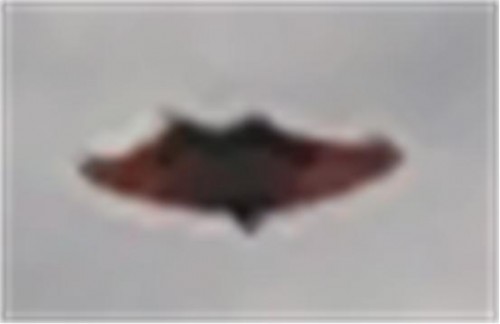 As I was searching the MUFON reports this morning, I came across this interesting story from Chicagoland.

Along with many other novelties in Chicago there just happens to be a giant Indian on top of a tobacco store at the northwest corner of 63rd and Pulaski Rd.

It seems a man and his wife had stopped to take photos of the Indian with his new smartphone when the incident occurred, unbeknown to him until later that night when he was examining the pictures.

Right away he discovered an object in the sky near the Indian and decided to blow it up out of curiosity. Once he enlarged the photo he was amazed at what he saw. Was it a bird, a bat or something completely different. It didn’t fit into any specific category, so he decide to just call it a UFO.

Here’s his MUFON report along with a couple of pictures. 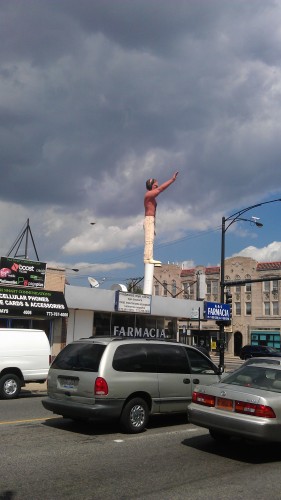 I’m from the southwest suburbs of Chicago. My wife and me travel into Chicago to take care of some business. On the way back we took a cruised
thru my old neighborhood just to check it out and to see what has changed.
We were going down 63rd St. going west and were coming up to Pulaski Rd.
I then remembered about a giant Indian that is on the roof of this tobacco
store (that’s what it was when I was a kid it’s something else now)on the northwest corner of 63rd and Pulaski Rd in Chicago. One time when I was a kid I was on the CTA bus going east on 63rd St. when the bus came to a stop
at Pulaski. I was looking out the window and notice three teenage girls standing on the sidewalk right next to the bus. Two of the girls were pointing up at this Indian trying to show the third girl something and they all giggling. So I was wondering what they pointing and laughing at.
So some time went by and then one day I went to the currency exchange right over there. On the way out I decided to walk over by the Indian to the same spot where I seen these girls laughing and pointing to see what it was they thought was funny. Well it turns out that if you look at the Indian from this exact spot his left thumb is sticking out and it looks like his thing is sticking out his pants. So when my wife and me were going by this Indian on August 22nd 2011 at about 2:00pm I decided to get a picture of this. I just got new smartphone and I wanted to check out how good the camera would work. So I got out of the car and went to the spot and took about four pictures of this Indian. So we left and went home and later on that night I went to look at the pictures I took. When I was checking these photos out, in one of the pictures I notice the object that was on the backside of Indian. At first I didn’t think nothing of it, I figured it was plane or something. But just for the heck of it I enlarged it. It looked something similar to a bird or a bat, but then again it doesn’t. So I have no idea what it could be. I was reluctant to send it in because I figured there was some explanation for what it is. But then I thought it still qualifies as UFO, because I never seen anything like it before and don’t know what it could be. 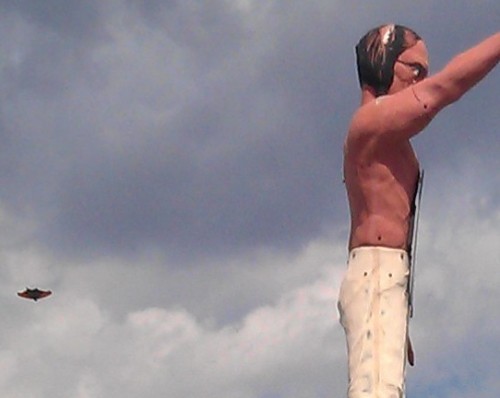 Now, the first thing that came to mind for me was a skydiver in one of those wing suits. But then I got to thinking, someone would have to be pretty daring to be doing that over the city. It certainly has attributes of a bird but then again, I just don’t see a bird here. To me it is most identifiable with a bat but again we have an issue. I’ve never seen a bat flying over Chicago in broad daylight and although we can’t really determine actual size it looks awfully big to be a bat.

There is one other conclusion. However, it’s the most unrealistic one I’ve come up with in a long time. I’ve always had a fascination with Mothman for some strange reason and when I saw this, I have to admit that it didn’t take long for Mothman to pop into my head.

Maybe I was channeling John Keel who wrote the book The Mothman Prophecies. Could this be the harbinger of a coming disaster for Chicago or is it something explainable and mundane?

I vote Mothman! Come on! It’s been pretty dull around here, I can dream, can’t I?