The ghosts of Asbury Church For a few years in the 1990s I was involved in The United Methodist Church. One of the positions I held during this time was as “Lay Ministry Coordinator” at Asbury UMC in Erie Pennsylvania from fall 1996 till the almost end of 1997. I ran the Education Department and Youth Groups with the goal to train leaders who would eventually take over my various positions and responsibilities.

I had some great times at Asbury UMC, some of them were a bit bizarre and a few were paranormal.

The Pastor that I worked with had a young teenage daughter who loved spooky stories, and I told her some of the strange experiences that I have had over the years while I worked with her and the other kids in the Youth Group. After a few months the other Pastor asked me not to tell these tales to her anymore. He thought they might be having an impact on her.

And it was beginning to frightened him.

For she was beginning to see ghosts in the Church Cemetery which was adjacent to their parsonage.

I could have dismissed this as youthful fantasy if there were not so many other stories to back up her claims.

Asbury Methodist Church is one of the oldest churches in Erie. It began as a small meeting house in 1819 and relocated to its current location next to the graveyard in 1823. Over the years as the church acquired more land, buildings have come and gone. In the 1940s urban expansion and the building of a local airport increased traffic drastically. This meant a widening of the area roads and since the church graveyard sat at the corner of the major intersection, a sizable chunk of the graveyard had to be plowed up and what remains that were found had to be relocated.

Many of the older members of the congregation told me that some of the older graves whose occupants and coffins had long ago dissolved into the earth were plowed flat and paved over for the widening of Asbury Road. The old wooden crosses that once marked their graves had become indiscernible wooden posts and were discarded by the crew working on the road. A few weathered pieces of marble tombstones were tossed aside as well for the road widening project. These aged graves were no longer remembered and their families long gone. And the remains of the former occupants which were too minuscule to see were scattered and pounded into the earth under the asphalt.

The older members always talked about this incident with pity and disdain, but the State was in control of the project. Even though the tradition handed down from generations within the church told that there were graves at those locations, the State said there was no real evidence to support that claim since there were no bodies or coffins to be found. So the project proceeded as planned and the earth was leveled and paved.

Within a few years sightings and strange happenings went on in the cemetery and the old church building. 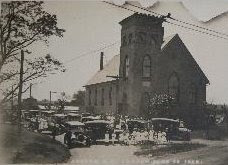