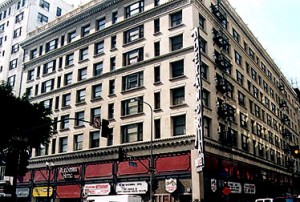 The Alexandria hotel is situated in downtown Los Angeles. Opened in 1906, it was one of the most socially active restaurant and hotel in it’s time.
Serving the hollywood, political and social elite like Winston Churchill, Enrico Caruso, King Edward VIII and American presidents like Taft, Wilson and Theodore Roosevelt. Charlie Chaplin used to frequent the spot as well. After a few decades from it’s opening day, the Alexandria became a more desolate building.
Construction and expansion of the city was moving westward. Textile companies flourished in the city and little by little the nightlife and cultural mecca that was known to have existed in downtown slowly gave way to factories and runaways. It was evident that downtown Los Angeles started to become a wasteland. 102 years into the future, the Alexandria hotel is slowly rising from the ashes. Now, the downstairs has become a comedy club and bar, while the upstair units have been turned into lofts. Needless to say with all it’s history, the reconstruction and remodeling of the building has invited new activity to the building; but not of the social or political elite, more like poltergeist activity.

I was able to get a first hand report from one of the building’s tenants. They describe in a chilling inside as to the feeling inside the building and strange apparitions going on. What follows is a first hand account of the ghostly activity that goes on.

“…I have been living here for a while now and always sensed and felt a weird vibe in this bulding . It’s hard to explian but things just didn’t seem right here. This building has alot of definite negative energy as well as a long and vicious and troubled past . I looked it up and found out some pretty unsettling things that have happened here . So it is easy to see why extra spirts and guest would be hanging around. Alot of the rooms have been converted to lofts and apartment units. I currently reside in a unit which has since been converted to a small studio apartment . But before it was a unit occupied by James Cagney the actor … There are alot of units here converted that once belonged to actors and actress of the early days.

From what I have learned and know this was where the elite of the elite came back in the day to entertain and hang out so to speak. When I first moved here in early 2005 I had alot of weird and un explianable things that happened in my unit and throughout the building. I always wrote it off to an over active imagination and my mind playing tricks on me because of me learning the history of the bulding. But some things that have happened I have yet to find and anwser to or explian. I stll have a hard time sleeping at night and at times I feel like there is someone unseen to me still hanging around in my unit. I can just sense someone here. There was another time a while ago when I first moved in. Me and a good friend who didn’t like the idea I was staying here was checking out the ballrooms and other places in the building I had heard of. We went to a few since there are more than one in here. And I was totally mesmerized with the beauty of some of them. It was when we went to the ball room on the second floor something weird happened. I was walking through just checking it out with my friend we must have been in there about five or ten minutes. When I noticed my friend takeing off out the door and around the corner. I didn’t know who or what he was after but I do know what ever he thought he saw shook him up pretty bad. I asked him what he had saw and he swore up and down he saw a women in a 20’s type like dress standing there watching us and then when he went toward her she walked down the hallway around the corner and disappered. He said he called after her but she just kept walking. I never seen my friend look that shaken before to this day he won’t go near that ball room or in this bulding unless I am with him . The elevators in the building is another interesting story. The elevators have always been every since I have lived here rumored to be haunted. And ,sometimes whatever enity or spirts likes to ride to the ballroom on the third floor. I have been on there on more than one occasion trying to get to my floor. and without notice and out of no where the elevator will just go to that floor open and sit there like it is waiting on something or someone to get on. Sometimes it will just sit and sometimes it will open and shut and continue on it’s way to whatever floor you have chosen to get off on. It also likes to go to the legendary 9th floor which everyone that has ever lived here knows is haunted .It is titled the ghost wing and had that name way before I ever moved in here.Part of the nineth floor has been sealed off and noone can access it. For obivious reasons no one brings it up and talks about it because of all the weird and unexplianable things that people witnessed and happened when the wing was open.
I have heard alot of different stories but the wing is defitnley sealed off for a reason. There’s Rudolph Valentinos old unit which to this day is rumored to be haunted and alot of weird things to have happen in there. I have never been inside but a friend who lived across the hallway said he heard and expierienced alot of weird things living across the way from that unit and room. There’s also a weird vibe you get when you are up there. And, last but not least There’s the tunnels and dugeon underneath the bulding and the bar room which has since been turned into a comedy club. Those two places are defitnley, defitnley haunted you can just feel something there. And ,I never go into either for any reason or alone. I could go on all day about all the weird vibes and energys in the bulding I have expieriencd since living here…”

As the downtown Los Angeles renaissance continues, there is a feeling that Los Angles’ old phantom tenants are being displaced. Buildings and locations that have been condemned for nearly a century are now being inhabited. Ghosts, hauntings and such reports are on the rise in downtown Los Angeles.