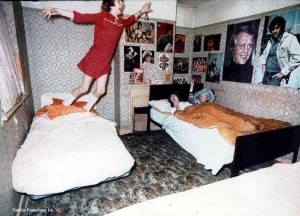 Janet levitated by an unseen entity

The “Enfield Poltergeist” is a well known and well documented poltergeist case that took place in Enfield, London in the late 1970s. This poltergeist case surrounded the Hodgson family, which consisted of the mother (Peggy), 2 daughters (Margaret, Janet) and 2 sons (Johnny, Billy). As usual, the focus of the activities was around the prepubescent girls. The entity that was stalking the Hodgson’s was that of a supposed “Bill”. A previous owner of the house.

I remember reading about the Enfield Poltergeist case way back in 1993 for the first time. I always assumed that this was a hoax perpetrated by the Hodgson girls. The evidence that was taken from this case, albeit there being a lot of it, was not very useful to the scientific community. When I read about this case I assumed that there might have been some unexplained noises or raps heard, maybe even some spirit communication established. Reading up on it further, it is just as inconclusive today as it was back 30 years ago. People can’t either disprove or prove that any paranormal events happened.

What I do consider very tantalizing evidence is the recording done by the paranormal ivestigator Maurice Grosse. The investigator’s son was able to get the spirit of Bill to tell of how he had died. The ungodly voice then is heard telling of how it died:

“I went blind…. Then I had an Haemorrhage, and I fell asleep and I died in a chair in the corner downstairs…”

When Maurice Grosse located the previous homeowner’s son, he played the tape for him. Bill’s son confirmed the story. Stating that it was exactly how his father died.

To me, that is very good evidence. Although, one can argue that it could possibly be that one of the girls some how, overheard a neighbor perhaps telling of how Bill died. Interesting nonetheless.

To this day I still am on the fence about this case. The fact that the girls were caught manifesting some of the activities at times is a big red flag, but the fact that they admit that not all of it was faked, or the creepy revelation of Bill’s death sways me back and forth on the fence.

Interview with a Poltergeist – 2/6

Interview with a Poltergeist – 3/6

Interview with a Poltergeist – 4/6

Interview with a Poltergeist – 5/6

Interview with a Poltergeist – 6/6