I have a peculiar story to share with you guys today. There was an incident that happened to my brother and myself a long time ago. I haven’t really thought about this in a while, but my first paranormal experience involved a Shadow Person.

Shadow People (as they are commonly known) are said to be these translucent dark beings that appear and disappear randomly. Lacking facial or musculature features, most people who see them claim that they are not malicious or negative, but are here as observers.

I personally have a 2 friends that see them almost on a daily basis. These people do not have any reason to lie to me about this. They have told me, very matter-of-factly, of them being followed by these Shadow beings throughout the day. Sometimes they follow them out the house, other times they appear for a split second in a corner.

The story that I wanted to share happened to my brother and me around 1988. I was 10 and my brother 7 at the time and we were living in Guadalajara (City in Jalisco, Mexico). We all used to sleep in the same room together that was on the second floor of the house. This floor had access to the rooftop patio and a bathroom. We all slept on mattresses on the floor, giving us a ground eye level view of the whole room. The bathroom was maybe a 1/2 bathroom. Very small. It had a window with stained glass to let the sunlight or moonlight in. It did not have a door, so to improvise we had put in a rod and a curtain in an attempt to get some privacy.

One night, as I was laying there I could not go to sleep. It must have been around 1 or 2 am and I just kept tossing and turning. Everyone else was asleep and the only light that I remember was the dim radiance of the light pollution of the city and the moonlight that came in through the stained window in the bathroom.

This actually caused a backlight effect in the bathroom. As the moonlight came in it illuminated the bathroom, which had the white curtain “door” acting as a projection screen. So any shadows that was caused by the moonlight would get projected onto the curtain. So it was really early in the morning or late at night. I’m sitting there…just letting my eyes wonder. Then suddenly some movement caught my attention. I saw movement in the shadows in the bathroom.

As I turned to look, everything was still. So I’m thinking “OK, it’s probably just the wind moving the curtain…”

At this point I’m getting sleepy so I try to close my eyes to sleep. Suddenly I notice the movement again. This time, the curtain does not move. The shadow moves. So I freeze. I focus my sight on the curtain and sure enough within a few seconds I see what I think is this shadow of a small boy walk around in the bathroom.

Most of you might think this can be explained as overactive imagination of a child. Or my mind playing tricks on me. I swear to you that what I saw was a shadow of a boy independently move about the bathroom. The curtain did not move, other shadows did not move. The shadow was semi detailed. I was able to tell where it’s head was, as well as shoulders, arms and legs.

As soon as my mind was made up that what I was seeing was some kid inside the bathroom just moving about and doing erratic movements, I started to feel this panic. I wanted to get up and run, but I thought that if I did, this thing might come out and catch me. I was petrified.

About a few minutes into this ordeal I hear heavy breathing to my side (right side I think). I thought there was a second one of these things and it’s face was next to mine. Not wanting to turn and look, I figured it was best that I did to know for sure that my best choice was to run. I turned my head sideways and saw my brother’s face. Wide-eyed and breathing heavily. He was staring at the same thing I was staring at for the past few minutes. He was clutching the blanket close to his face and just trembling.

I called out: “Hey Johnny”

He quickly turned his head and looked so surprised. The expression on his face was that of fear and disbelief.

The shadow was just pacing back and forth. Raising it’s arms at times or just standing there.
Time must have passed by quickly, because I remember getting so sleepy and just telling my brother to close his eyes and go to sleep.

To this day I do not know what it was that I saw. I do know that it could not have been the wind, since the window was not open, nor do I think it was the type to open.

It’s one thing to say there was a single witness to a story, but two?

So what was the thing that I saw?

Let’s talk about Hypnagogia. Hypnagogia is a physiological condition where a person is in the border of sleep. In that area where you are more asleep than awake, but still aware of your surroundings and environment. It’s a great possibility that since it was very late at night, a 10 year old boy in the full state of Hypnagogia can hallucinate a plethora of wild things. In fact, I did it the other day when I took 2 tylenol PMs. I experienced auditory hallucinations while dosing off. Then you have to consider that not only it was one kid, but two kids having the same hallucination. Which is difficult to explain.

Ok, so maybe not Hypnagogia, but what about strong electromagnetic fields wrecking havoc on our heads? possible. The homes in Mexico are build out of brick and mortar and as far as electricity and plumbing go, it’s a death trap. I’m sure our home was not shielded against high EMF forces. In fact, I knew of some outlets that straight out had the bare wires sticking out the socket. Shocking us as we clumsily walked by at night. What a fright. So OK, electromagnetic fields can cause severe psychological and biological issues. It does not explain why this was the only incident we experienced. We never saw this thing again.

What about pareidolia? If you’re a constant reader of GhostTheory.com, you’d know that we are a big fan of using pareidolia as explanations for most paranormal claims. Can more than one person see the same thing when pareidolia is in effect? The answer is yes. It happens more often than one would think. You hear about it every other news report; the Virgin Mary appears on a stained glass. or the face of Jesus on a piece of toast. Pareidolia is the effect in which one’s brain interprets light/shadow/texture as something very similar to us, like faces or human outlines. For example the face on mars. Which uses all three of the factors of pareidolia, light, shadows and textures. 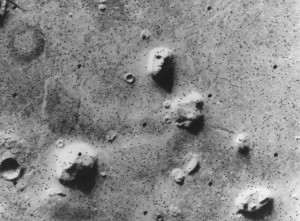 Lights, shadows and texture all play an intricate role on the face of mars

So could it have been pareidolia that caused my brother and I to see the same thing? It’s possible.
Could it have been one of the so called “Shadow People”? Possibly, but it does not explain the accounts of millions of people who claim to have seen these shadows move about with some intelligence.

To this day I do not have an explanation as to what we saw. I have not seen anything like that since. I think I find comfort in that, since I would not want to see shadow beings at any given time in the day.