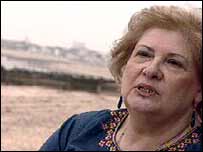 I received an email from our dear friend Daniel over at Leinster Paranormal about a new James Randi challenge happening today.
The famous psychic Patricia Putt opted to take on the 1 million dollar challenge. As many of you might know, the Randi organization has a long standing challenge going on; 1 million dollars to any one who can prove psychic or supernatural abilities under strict guidelines. To this day, the cool million still sits in Mr. Randi’s bank account.

So today, Patricia Putt decided to go ahead with the tests and take on the challenge.

Mrs. Putt has been in the limelight before. BBC news had a piece on her (in)abilities as a exorcist and ghost hunter.
Here is a snippet from the BBC report:

To put Patricia’s claims to the test, Inside Out invites her to a challenge.

We’re asking Patricia to commune with the spirit of a person who died in a house.

Carol Coubrough’s mother Ena died of cancer in her home last year, but Carol is convinced that Ena’s spirit is still present.

“I do sense my mother in the house, as do my children,” explains Carol.

“I can feel her on my shoulders or touching my hair.”

Patricia is blindfolded and taken to Carol’s house in Pagelsham, Essex.

She is given Ena’s diary to hold, but must keep her blindfold on throughout. This “blind reading” is one of the most challenging for any medium.

Patricia gets off to a shaky start by wrongly identifying the diary’s owner as being male. 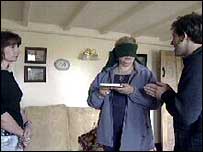 Patricia wrongly suggests the diary belongs to a man

She then goes on to describe the owner as being “strong-willed, forthright and a good after dinner speaker.”

These traits are completely at odds with Carol’s description of her mother as “kind, humble and wise.”

Patricia correctly identifies Ena’s teaching work, but suggests it was children she taught rather than disabled adults.

When asked the name of the person she is in contact with, Patricia suggests Jessica, Jessie or Mary.

In this instance, Patricia’s reading is far from accurate.

“A lot of things I couldn’t understand at all,” admits Carol.

“Nothing jumped out at me.”

Patricia insists that any mistakes made in her reading are down to her misinterpreting the information given to her.

With no proof that the exorcism was successful and inaccurate results in the Patricia’s challenge, there is little to persuade sceptics that mediums can commune with the spirit world.

So “is there anybody there?” Inside Out is still waiting to find out.

Today, Mrs. Putt decided to take on the Randi challenge and the results were as expected. Coming in at a score of 0 by the participants, Mrs. Putt’s credibility dropped a few notches yet again.

Patricia Putt, who claims she is psychic, took the preliminary test for the One Million Dollar Paranormal Challenge today. The test was conducted by Professor Richard Wiseman and Professor Christopher French. In order to pass her challenge test, Mrs. Putt was required to pen psychic readings for ten volunteers who were then asked to identify their own readings from the group. At least five volunteers would have had to correctly identify their own reading.

None did. Mrs. Putt’s readings were correctly identified by zero out of ten volunteers.

According to the testers, Mrs. Putt took this failure well, and did not blame the test or the testers but rather her own powers for failing.

Now the question on my mind is: “When will Chip Coffey take the Randi challenge?”