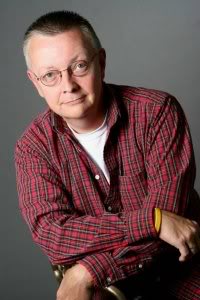 Uhm…. So a few days ago I did a post about “Chip Coffey being in a radio interview” and figured it would be a great idea to get people to submit their own questions to the EERIE radio website for Chip. Well as it turns out, Chip Coffey decided to cancel the radio interview because he perceived it as a “Chip bashing” interview.

I was slated to make a guest appearance on Eerie Radio this coming Sunday. I briefly met the folks from this radio show at an event in Indiana a few months ago. My friend, Greta, who often helps me with publicity and scheduling, set up the interview.

Yesterday, I received a Google Alert (aren’t they wonderful?!?) regarding my appearance on the show. It seems that Chris Scales from Eerie Radio recently sent out an E-mail, soliciting questions that potential listeners of the show wanted the hosts to ask me during my appearance.

The Google Alert led me to a web site where a few chronic “Chip bashers” were having a bit of a field day with their plans to submit questions.

Time permitting, I am generally willing to do radio interviews. I am not, however, willing to do any show during which the hosts intend to goad, challenge or disrespect me. I will not defend my work and/or any of the TV shows I appear on … and I will not engage in debate on potentially incendiary topics.

Therefore, I will not be making an appearance on Eerie Radio on Sunday or at any time in the future.

And here’s a news flash for any radio or TV show host(s) or producer(s) who invite me to appear on their show(s): if you are discourteous to me or “push the envelope” too much, WE’RE DONE! I’ll hang up the phone during telephone interviews or leave the studio/set during live appearances.

🙂 Hope everyone is having a great Thursday!

Now, I’m pretty sure Chip is referring to GhostTheory when he says:

“few chronic “Chip bashers” were having a bit of a field day with their plans to submit questions. ”

Let me just set the record straight. We are not a bashing site. I’ve heard Ryan Buell say this before. Now Chip Coffey is also stating it. Why is it difficult for these guys to understand that critical thinking does not mean “witch hunt”?

The questions that I had written for Chip can hardly be construed as defamatory. The questions that some of our readers posted were not disrespectful in any way, they were real questions that many skeptics have. Why do these guys assume that we are out to bash them, if the only thing we are doing is asking these critical questions?

I’m sure that Ryan and Chip get asked millions of questions whenever they make public appearances, but those questions are asked by their fans and followers. What about the questions that the rest of us have? are we to be considered “bashers” just because we have a different perspective on their work and cases?

For example, check out some of the questions asked by our readers:

bellaboo:
i’d ask him if “chip” is his birth name, if not what his real name is and where he (supposedly) received a bachelors degree in psychology from.

i’d also love to hear his answer to javier’s question regarding his 100% on camera accuracy rate yet unwillingness or disinterest in the randi challenge or any challenges at all by the skeptical community.

i’d ask him (without knowing a thing about me) to tell me all about my past and future. for free, publicly. maybe not me, whomever i were to put on the phone, internet or however he does his normally $250 per half hour divinations.

Mark:
If he really does have the power to talk to the dead, how come he needs a television show?

How much does he make take home per episode?

What does he do with his spare time?

I asked the following.

I have my own personal questions.
For instance, What proof can Chip Coffey give to us about his high ratio of successful readings he does when walking into a client’s home? In other words, is he willing to take the James Randi Challenge for a cool $1 million?

Another question would be about the PRS and their Demon related cases. It seems that they research a lot of “demon cases” and come to the conclusion that demons are the root cause of a lot of the hauntings. It seems like the PRS team uses demonic possession quite freely. My question is, Can he explain these high number of demonic infestations or possessions, when the Catholic Church has actually deemed a small handful of these types of cases unexplainable in its entire history?

Now, in no way were these questions disrespectful or out of line. Being in a very controversial television show, he should be able to stand his own ground and really answer the critical questions.
If Chip has the abilities he claims he does, why does he seem so under-confident about interviews?

I’m sorry that EERIE Radio did not get their interview. I would like to let them know that our intentions were not to bash Chip. I would like to thank then to reaching out to the community.

So Chip, if you are reading this, when do we get an interview with you?