So October 13th 2010, came and went. According to retired NORAD office Stanley Fulham we were supposed to see a display of hovering UFO crafts above Earth’s major cities on that day. Well, something did happen.

Around noon time in New York, many people reported seeing strange object hovering above the city. The objects were said to be executing unnatural maneuvers and to have emitted bright lights. Several videos were posted of these supposed alien craft and all I can tell you is that they look like balloons. Upon blogging about the emerging news, the big news site, HuffingtonPost mentioned GhostTheory on their article about the New York UFOs. Immediately I saw the big spike in traffic on our servers and it slowed our website down to a crawl. But there were a few people who were able to report in from New York right before GhostTheory buckled under the massive wave of traffic.

OH MY GOD–= IN TIMES SQUARE, THEY HAD YELLOW BALOONS TODAY PROMOTING TOURISM TO GRAN VIA IN MADRID. THEY LET THEM LET THEM GO– CHELSEA KWEENS, RELAX.

I was in Times Square today. Someone was releasing dozens and dozens of yellow balloons for a period of 2 or 3 hours. I don’t know why, but that’s what these are. You can check Twitter to see people talking about it this afternoon. 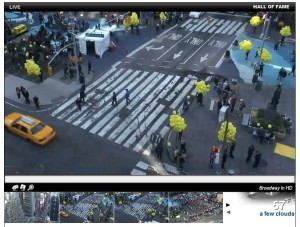 There was an interesting comment left by GT reader Kevin:

Kevin says:
October 14, 2010 at 8:22 AM
I love how everyone talks about how people are just crazy and it’s for publicity. And then thousands of reports in NYC of ufo’s come out and discussion just stops on this page.

I wanted to point out this comment because of what it really actually means. Kevin is under the impression that we, readers and editors, were somehow convinced that what the media and social networking sites fiercely propagated as the truth, was real. But that’s far from the truth. Thanks to you guys, GT was getting updates from all across the globe on early October 13th, 2010. Not that we were expecting any crafts to appear above us, but just to reiterate that there are some people out there that will take advantage of the media, social networks and propagate their own delusions. In this case, Mr. Fulham had a motive; he was pushing out his own book.

Do I believe in UFOs and aliens? Yes. Do I believe that this person is in contact with “souls” who are eons of years old and was given a date in which aliens would make their presence known? No.

Overall I think this was just mass hysteria. If you read the news sources carefully, not one of them states any official records of UFOs or shows any evidence. All we know is what thousands of people blurted out over Twitter and Facebook: “OMG UFOS over NYC”