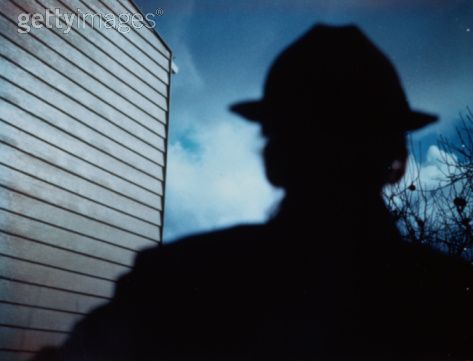 My encounter with the Hat Man took place not long after I graduated high school in 2003. I’d had a few experiences with the paranormal in my childhood but nothing really worth noting. The most significant experience I’d had was seeing an apparition at a campground when I was 13. But I can even dismiss that experience as something I might have just mistaken as paranormal. Only the Hat Man stands out in my memory as something out of the norm, something that I can’t explain away.

It was sometime in early winter when I had the “Hat Man” experience. It was a cold and overcast day when I and my boyfriend at the time decided to take a short hike down the railroad tracks that follow the Brandywine River. Hiking was something we did quite a lot since we both loved being outdoors as we were too broke to do anything else. We started out in Embreeville County Park where the Brandywine and the train tracks run parallel to each other. The area has a lot of long forgotten history such as an old poor man’s cemetery and ruins of stone buildings. I also heard that during the Revolutionary War, some British and/or Hessian soldiers camped out in the area before the battle of the Brandywine.

To continue, we were about a mile or so into the hike when I saw an empty turtle shell off to the side of the tracks. I thought this a bit strange until I saw some stones laid out in what seemed a deliberate pattern. They were in the shape of a circle divided into what appeared to be the outline of a cross (some kind of solar cross I think). I pointed it out to Johnny who got very excited about the turtle shell. It didn’t think much of it but I did think it somewhat odd that someone would pick this random spot to arrange such a pattern. I don’t know if it had anything to do with the Hat Man but I thought it worth mentioning.

We then decided to take a break and sat down on the edge of a nearby bridge. This is when I started to feel very uncomfortable; it was an ominous sort of feeling. It was really unsettling but I didn’t say anything since I’ve always been an anxious person. Also the cold was bothering me a bit. However the longer we sat there, the stronger the feeling became. I remember getting up and pacing a little. I began to feel like I wanted to just go home, but we’d only been out there for an hour, and I didn’t want to seem like a whiner. Finally, Johnny asked me what was wrong and I told him I felt weird and tired and wanted to head back home. He thought I was mad at him for some reason, but I insisted I wasn’t, just that I was probably just tired from work the day before. He got up and gave me a reassuring hug. Suddenly the ominous feeling intensified as I felt we were being watched which was ridiculous because we were in the middle of the woods. But my attempts at reasoning didn’t diminish the now growing sense of dread. Fear began to wash over me as something over Johnny’s shoulder caught my eye.

Off to my right, on the opposite side of the tracks there was a hill that had been partially cleared for electrical transformers. At the edge of the woods there was something moving up the hill but away from us. I was sort of relieved for the smallest second thinking, “It’s just some person up there looking at us!” But then it stepped out of the woods into the clearing. It was a figure of a person but something inside was telling me that it wasn’t human. It was ALL BLACK from head to toe. It was so black that it seemed to absorb the light around it. It was one solid mass of super concentrated darkness. This thing was wearing a trench coat or a cape and a wide brimmed hat. I couldn’t make out any facial features; it seemed to be literally made out of pitch. It took several long strides into the clearing and stood at the base of the transformer, hands in its pockets or at least it looked that way. It stared at me the entire time, never looking away to navigate.

The second it had revealed itself from the cover of the trees lining the clearing I felt terror unlike anything I’ve ever experienced before or since. I remember vaguely wondering why I would react like this to what I still wanted to believe was just some idiot dressed in weird clothes. I wondered if it was possible that my eyes were playing tricks on me or maybe I’d just gone off the deep end and was hallucinating. I felt as though my blood had literally turned to ice and my heart had dropped out of my chest. It wasn’t panic; I know what panic feels like. This was different; it was dread, foreboding, sinister and awful.

Johnny must have felt me freeze up or maybe I said something to him. For the life of me I can’t remember because I was petrified. Just then Johnny turned and saw the thing standing on the hill. I remember him saying in a very confused and frightened tone, “What the f*** is that?” At that point any concerns I had about my own sanity were extinguished. This was NOT normal and even worse, it was real. I remember wondering if being insane might not be so terrible. At least it would provide a logical explanation.

The figure just stood there on the hill staring down, staring directly at me. It didn’t really move, or make even the slightest sound; it just stood there and stared. It felt like pure evil was emanating right thru me. In a moment of clarity my fight or flight mechanism kicked in and I sure wasn’t going to fight. If we didn’t leave and now, something unimaginably horrible was going to happen to us, I was sure of it. I grabbed onto Johnny’s sleeve and began to move, almost dragging him along as I went. He tried shaking me off and was mumbling something about confronting it. Now I wondered if he might be insane! I insisted that we had to leave, NOW! Johnny was not an aggressive person at all but he wanted to fight this evil phantom. “Who are you?” he yelled. The black as coal figure did not respond, it just kept focusing on me. I decided I wasn’t going to wait another minute, it was time to go. I said something along the lines of, “Fine, go ahead and die…. I’m leaving, NOW!”

I’m not sure if I was walking or running, I just knew I was moving, away….Away from this horrible, evil, dark thing. It wasn’t a moment and there was Johnny was behind me, I guess he’d either changed his mind or had been trying to be tough. At that point it didn’t matter as I was glad he was with me. I took one last look over my shoulder to make sure it wasn’t following us. Blackie had in fact climbed further up the hill, as if he were trying to keep me in view. However it wasn’t following which was the most important thing at the time. The Hat Man…Yes, that is the name I eventually gave it. The Hat Man just stood, watching. We retreated to the car as quickly as possible. At that point I was feeling just slightly less threatened but still very distraught. We got in the car, Johnny on the driver’s side and the engine roared to life. He kicked it in gear and we sped out of there as fast as we could go. On the drive home I struggled to make sense of what had just happened but for some reason I didn’t say a word nor did Johnny. In fact we never spoke of the Hat Man again.

As much as I love to tell stories and relate my experiences to anyone who will listen I held the Hat Man inside, eventually telling my best friend but no one else. Frankly I just couldn’t talk about it as those terrible feelings would come rushing back almost haunting me with residual evil. It has been just recently that I was able to start opening up about the Hat Man. I drew a rough sketch of what the thing had looked like. My friend said she’d seen something very similar on the internet and that other people had seen it too. I did my own search and was completely shocked when I found a drawing someone else had done. It was identical to what I’d seen! I’ve been looking into everything I can about the Hat Man since and started telling some of my friends and family about it. I’ve found that the more I talk about it, the less it frightened me the way it used to.

In all my time researching the Hat Man I’ve yet to find anyone who’s seen him in broad daylight in the middle of the woods. Most of the accounts I read were of him appearing in people’s bedrooms and similar locations. I wonder why I saw him the way I did and if it means something.

I just wanted to hear what people thought about it, and if anyone has a theory or knows anything about what the heck this thing is, I’d love to hear you.

“It was like an echo from the Hat Man bouncing off of me, finding me wherever I went. I just knew if I talked about him, the Hat Man would find me.”