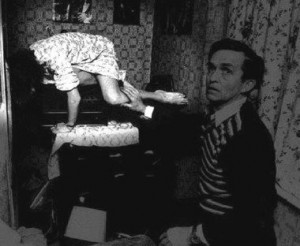 As a paranormal writer, I’ve read plenty of cases that have sent shivers up and down my spine. I’ve followed up with cases and conducted several interviews for GhostTheory. I’m grateful to have such a popular website in which has granted me interviews and information that is either not accessible to the general public or difficult to get. I’ve also made friends, colleagues and what I might consider some to be rivals. Throughout all this, there are a few cases that shake me up. These cases are talked about here on GhostTheory a lot.  ‘The Entity‘ case is a major one. Not just because of the tremendous evidence and reliable eyewitness testimonies, but because it happened near my old neighborhood and because to this day, I’m deeply involved in the story. It’s become something personal to me. I’m attached to the story as much as the story is attached to me; at times this turns frightening.

There is also the story of ‘The haunting of Jackie Hernandez’ and her home in San Pedro. This story also tends to shake me up. The descriptions of the haunting and amount of details in this story really speaks volumes for the type of phenomena that exists out there that we know nothing about. This is real. I don’t know if ghosts really do exists, but I know that there is some strange phenomena that is intelligent enough to interact with us and our world but in a way that seems frightening and impossible. Throughout all my writings and readings there is one other case that also creeps me out. A case in which reporters, investigators, neighbors and police were witnesses to strange happenings in a house in North London. The case is known as the ‘Enfield Poltergeist‘.

I’m currently finishing up a book in which little tidbits of the Enfield case are discussed. The book describes in detail police reports and rare interviews into the case. Interviews with police, investigators and reporters is what makes this a refreshing source of new information on the case. While reading through the chapter in the book that talked about the Enfield case, the author mentioned that one could listen to the full tape recordings that the investigators did with “Bill”.

Now if you know anything about the case, you’d know that “Bill” was the spirit of a man who died in the house and is responsible for the haunting that tormented the Hodgson family. During the height of the investigation, the focus of the poltergeist, Janet, was being used by “Bill”. Janet started to talk in a low and raspy voice after going into some trance-like state. The voice was answering the investigators questions and for weeks it talked to the reporters. At times for hours on end. Meaning that if the young girl was doing this voice in efforts to trick the investigators and the world, she would have a really sore throat after the 3 hour long sessions of Q&A. That wasn’t that case though. Janet would snap out of her trance and continue talking in a way that was indicative of a 12 year old girl’s mentality. With no signs of trauma to her vocal chords.

It was so bizarre that the investigators had to bring in a ventriloquist and some form of voice pattern expert in order to try and explain how a little girl can produce such a voice without damaging her vocal chords. No one ever really figured out how she did it. Things got hairy when “Bill” explained how he passed away in that house. When the son of the main investigator, Maurice Gross, became skeptical of his own father’s belief in the case, he decided to investigate the claims of the dead man in the home. Maurice’s son was a lawyer and had a cunning ability to gather facts and evidence. When he investigated the deaths in the house, he became alarmed when he found out that there was a previous owner who had died in that house, in the same manner that Janet, or her voice, described. The man died alone in a chair in the downstairs part of the house. He was almost fully blind and died of a brain hemorrhage. The lawyer became a believer in his father’s work when he found out that the man’s name was in fact, Bill.

Here are the original recordings of Bill.