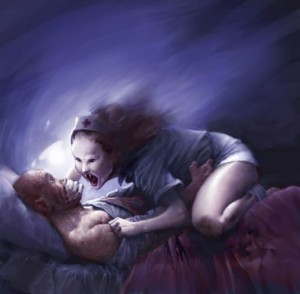 The “Old Hag” syndrome. Quite possibly one of the most terrifying sleep related disorders that affects more people than previously thought. Tales of an “old hag” coming into somebody’s bedroom at night and pinning them down while they struggle to breath from the enormous pressure they feel smashing down on their chest, are well too common. These tales span from different races, continents and religious backgrounds. Most assume that these nightly episodes are visitations from something out of this world.

I’ve written about the “Old Hag” syndrome a bit here on GT. There was a great documentary on the subject that I had posted back in 2009. Check it out.

So what is this “Old Hag” and how to you avoid it? The answer might be as simple as blaming narcolepsy for the ghoulish episodes. Neuropsychiatrists have gathered some important data from the dozens of cases studied each year. Most patients have exhausted all avenues in trying to rid themselves of the terrifying syndrome. Some even seeking an Exorcist. But what modern science has to say can put many at ease…at least until they get “the visit”.

In the following article, a Neuropsychiatrist talks about some of the most weird cases involving the “Old Hag” syndrome and narcolepsy:

It’s so common, we have a slang term for it: seeing the old hag.

For Denise (not her real name), however, the fact that it’s typical didn’t make it any easier to endure, and at one point, she found herself meeting with her parish priest, asking for an exorcism.

“It sounds so silly now,” she told The Telegram, adding that’s the reason why she declined to use her real name or have her photo printed.

“But there was a point when I really thought something paranormal was going on, and I wanted it gone.”

The first time she experienced the old hag was as a university student, during exams, the 47-year-old said. She woke up in the middle of the night with the feeling of something pressing down on her chest.

“I couldn’t move; couldn’t even wiggle my toes. I tried to call out to my mother, but couldn’t. It was like something was sitting on me, holding me down. I even felt the presence of a ghost,” Denise said. “It was terrifying.”

The old hag came back about a week later. This time, Denise said, she clearly saw a ghost.

“I saw the form of a person, sitting on me, their hands pushing down on my chest. I couldn’t tell if it was a man or a woman, but it was very clearly a human. Once again, I tried to scream, but nothing came out. I tried to raise my arm and couldn’t. It‘s like I was paralyzed.”

Because she had no known health problems and had actually seen what she thought was a ghost, Denise was convinced her problems were of the paranormal kind.

After nearly a year of being tormented by the old hag on almost a weekly basis, she turned to her faith for help.

“I went to my priest. I honestly thought there was a chance I was possessed, or maybe my family’s house was haunted,” she said, laughing.

“I asked him to bless me, which he did, and I asked him how to go about having an exorcism performed. At that point, I was dreading going to sleep at night. When the sun would start to set, I‘d start feeling panicky.”

It was the priest who suggested Denise talk to her doctor. A couple years later she visited a sleep disorders clinic in Ontario, and was diagnosed with narcolepsy.

Dr. Hugh Mirolo is this province’s only neuropsychiatrist, and sees many patients who suffer from narcolepsy.

Seeing the old hag is what he calls a combination of sleep paralysis and a hypnopompic hallucination.

Temporary paralysis happens to everyone, every night, while we’re in deep sleep, Mirolo explained.

Sleep paralysis, such as the old hag, occurs during the transition between deep sleep and waking up, as the brain may not always switch off the paralysis right away. It may not switch off dreams immediately, either, causing vivid hallucinations.

Seeing the old hag is a normal occurrence when it happens in isolation, Mirolo said, and can particularly affect those with unstable sleeping schedules, like those who do shift work, as well as people like us, who live in an area where the winters are long.

“The dark season affects us all, not just people with brain injuries,” Mirolo explained. “This is so common in St. John’s, because of the northern latitude and our frequent prolonged overcast weather.”

Put the old hag with other symptoms — including excessive daytime sleepiness, insomnia at night, hallucinations when in the process of falling asleep, and cataplexy attacks; sudden paralysis of all or some of the muscles in the body at any time of the day or night — and it’s part of narcolepsy, Mirolo explained. A number of factors could trigger symptoms like the old hag to suddenly appear, he said, including sleep disruption — as in the case of Denise, who had been pulling all-nighters, studying for exams — or brain trauma.

Though narcolepsy can be inherited, Mirolo mainly sees it as a symptom of a brain injury, which, many times, his patients don’t even know they have before coming to see him. They make the discovery after Mirolo assesses them, which can take weeks of interviews with family members and questions about the patient’s life right from birth, or even in the womb. A lot of patients will have suffered a brain injury in a semi-serious car accident, sports accident or playground mishap in the past, but never connected it to any of their current symptoms. People with narcolepsy are going in and out of sleep all the time, Mirolo said, describing it as the invasion of deep sleep into normal life. Those with narcolepsy can experience an abrupt unplugging of the brain — falling asleep in the middle of a conversation, for example — or a more subtle “going, going, gone” type of unplugging. It’s not uncommon for those with narcolepsy to fall asleep during car rides or to never seem able to see the end of a movie before falling asleep.

“A number of times, the patient will not even realize they have (narcolepsy) or they will not realize the extent of it; the sleep attack is usually witnessed by others,” Mirolo said. “The patient will perceive that they just nodded their head, and (in reality) a half an hour elapsed. They’re watching TV and then all of a sudden the news is on.

“Another typical example is as a passenger in the car: they unplug, replug, and where did Gander go? If there’s no time-giver, like the TV or if they have no relatives around, they might not know they have it at all.”

Symptoms can be even worse, Mirolo explained: people suffering from narcolepsy can often perform complex tasks while their brain is unplugged, like making phone calls or driving. They may look to others as if they’re sleepwalking, or they may simply look as if they’re in a daze.

“They can look like they’re playing close attention, but in reality, no one is home,” Mirolo said. “I have patients who were driving on the other side of the road for an unknown amount of time, and then all of a sudden they wake up and think, ‘What the heck?’ It can be very dangerous.”

Because they are constantly going in and out of sleep, people with narcolepsy can experience hallucinations like the old hag at any time of day or night, Mirolo said, and the hallucinations can include visions, voices or sensations.

Sleep attacks can last between a few minutes to hours, Mirolo said, depending on how severe the narcolepsy symptoms are.

Part of the treatment for narcolepsy is the same as the treatment for anyone who sees the old hag, and involves what Mirolo calls basic brain/sleep hygiene measures. There’s a long list of dos and don’ts, including no caffeine after 4 p.m. (in any form, including coffee, tea, soda and hidden forms like chocolate and soya sauce), no nicotine or alcohol after 6 p.m., and no naps during the day.

Bedrooms should be cool and dark while sleeping, should not be used for anything other than sleeping and sex and should not contain a TV, radio or computer, and we should expose ourselves to natural or full-spectrum light as soon as possible upon waking. A proper night’s sleep is between 11 p.m. and 7 a.m., Mirolo explained, and this is based on biorhythms; though we may get the same number of hours sleep if we go to bed a 2 a.m. and wake at 10 a.m., it’s not the same, he said.

“If you get up to go to the bathroom in the middle of the night, the light should be barely enough to allow you to see,” Mirolo said. “If it’s a bright light, your brain reads that as, ‘Good morning, Sir!’ The brain reads light as time to be awake; the absence of light as time to sleep.”