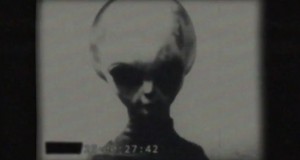 I’ve received several emails about the following videos that are circling Facebook and the rest of the web. Apparently, the videos are so convincing that many of the people who forwarded me these videos are either convinced that these are real, or could not find any signs of a hoax in the videos themselves.

So I want to post them up and hear what you guys think of them. First though, I want to interject with my own two cents.

I won’t even begin to attempt at trying to find any anomalies in the video or any signs that point to it being a hoax. With software becoming more and more advanced, it’s beginning to become a little bit more difficult to rely on one’s eyeballs alone. So I’ll take the liberty to skip analyzing the video.

Now, let’s move on to the claim itself. The claim is that these videos show an alleged UFO crash with alien bodies strewn about and a captured alien. The first video shows a recording of a gray, under what I guess is US detainment. The second clip is of a UFO filmed from the ground and from an airplane; this clip ends with the crashed UFO and the bodies of the grays being filmed and examined. The quality of the videos is what you expect to see from technology that is a few decades old.

I have to admit, both videos look really cool. They have this X Files theme to it. Although they are impressive in quality, it’s history that dictates the outcome. I don’t believe that such sensitive material could be leaked out in such manner. I don’t believe that if we are in fact holding some alien being here on earth, that we would find out through YouTube. Time and time again, we’ve seen these videos come and go. Some are debunked within time, while others are just forgotten and labeled a hoax.

What’s the fate of these videos? Maybe they’re the results of some talented and bored graphics genius. Or maybe they are just a form of viral marketing for some upcoming alien movie. Let’s see…what do we have coming out this summer? I know Oren Peli is working on Area-51. Or could it be a viral for some other film?