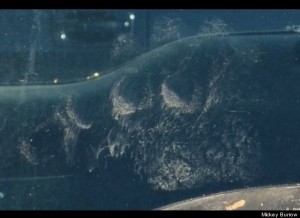 Today’s media coverage of the Fresno Bigfoot “Face prints” turned out as we expected, ambiguous evidence.
Although the guys who discovered the prints claimed that they were positive that these prints that were found on a truck’s windows weren’t those of a bear, they failed to really show the world evidence that they said would eclipse the Patterson/Gimlin film.

Of course, the media conference was called by Jeffrey Gonzalez and the rest to bring awareness of the evidence that they strongly felt proved the existence of Bigfoot. They wanted to bring attention and get the funding in order to have the DNA officially analyzed. A process that would cost them a couple of thousand dollars.

The Bigfoot researchers were pretty headstrong when answering questions from the media. They meticulously went through the day’s activities that led them to find the prints all over the truck. Their claim was that these prints could not have been caused by a bear since there were ice chests full of food in the back of the truck that remained untouched. They also presented a friend of theirs that was a professional forensics expert. He testified that the prints strongly pointed to a primate. Of course, he disclaimed that he was in no way an expert in biology or zoology for that matter.

The result was that the team wanted to tell the world that they believed to have in their possession some of the best evidence that would prove the existence of the elusive creature and get funding for the analysis.

Did they jump the gun?

I just did a quick photoshop debunking of the Fresno BF print, I would’ve posted it to the thread on the main site but i’ll be damned if I can work that out.
Yes I know it’s a polar bear against a window….but it’s a hell of a lot closer to the truth than bigfoot.
many regards,
elhombre
PS: Javier or Scott feel free to post this pic on the main thread for me!

And here is the original image of the “Face print” that the Fresno team said was that of a Bigfoot: 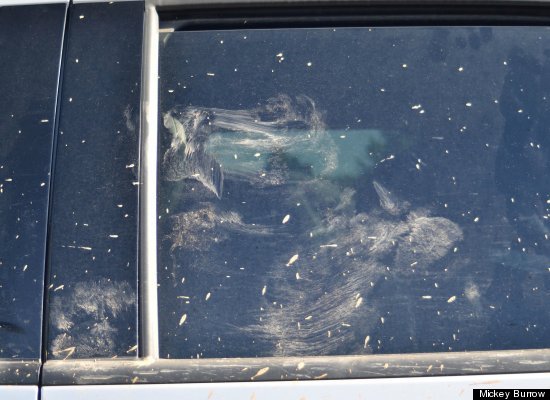 I have to say, these prints are strikingly similar to that of a bear.

elhombre’s work is impressive. He saw something that most of us did not. Using photoshop, he managed to paint the picture clear enough that even the hardest believer in the “Bigfoot face prints” would do a double take and re-think the face print claims.

GhostTheory’s community is a strong one. Made up of critical thinkers, open-minded skeptics, non-skeptical people and the casual troll. Regardless of who make up GhostTheory, I have to say that I’ve been so proud at how the community comes together to solve mysteries.

This time I have to give props to elhombre for such and abstract debunking post.

Anyone from the Sanger Paranormal team care to comment here?