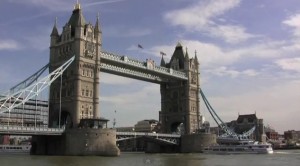 Something odd just happened. I’m not actually sure what it is.

While browsing UFO related news, I stumbled upon a recently uploaded UFO video that was shot in London. That’s not the odd part (believe it or not). But while doing a bit more research on this alleged UFO video, I learned that there are also two other videos of the same UFOs over London on that same day, shot by different people.
Yet, that’s also not the odd part of the story.

All videos are shot with HD cameras and at least two of the videos seem to have been edited in the same method.
Where the video is spliced with a “slow motion” recap towards the end right after a “Half speed” or “Slow motion” banner is displayed. Even the words are using the same “Text effect” in which they move towards the camera.

I’m not sure if this means anything. Maybe it’s the coffee I’m drinking. Who knows?

Just keep and eye out for any more of these videos or any new alien movie for the summer blockbusters.

Thanks to Paul Ravenhill for the heads up!