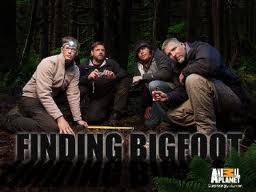 As if I needed to point this out.

A complaint by the cast of “Finding Bigfoot” is spreading through the web. They’re claiming to be fed-up with the constant editing and presentation of the show. According to Matt Moneymaker from the BFRO, the producers like to edit the show so that it seems like the team at times is chasing shadows or possibly Bigfoot itself.

The “Finding Bigfoot” cast isn’t too pleased with the results. Check out the article from Gather.com:

The TV show Finding Bigfoot has a lot of critics debunking the evidence that the legendary cryptid really exists. That now includes the people who appear on the show itself.

Cast members from the TV show have commented in various online forums that they are bugged by the heavy-handed editing done by producers of the series, and are not happy that they seem to be putting false words in their mouths. To say nothing of using tricks to make their actual findings more seemingly groundbreaking.

Critics of this kind of documentary-style Reality TV shows have pointed to programs about the Paranormal which seem to build on the gullibility and limited experience of viewers. The phrase “what the hell was that?” is becoming a catch-phrase for the practice.

It derives from the many characters in these shows who utter the phrase as they respond to perfectly normal, and easily explained, phenomenon caught on camera. Usually through night-vision FLIR lenses and “filming” ghosts or the famed Sasquatch itself. This seems to be the case in the latest example of rigged Reality TV.

Cast member and BFRO leader Matt Moneymaker says, in response to a question about one particular scene with typically grainy footage, “… the thing I ran after up the hill was a human — someone who was sneaking around us in the woods trying to watch the production in progress. I said so repeatedly and vehemently at the time, for the cameras, but they edited out all of that in order to make it seem unclear what I was chasing after.”

That seems to be all the proof needed. Looks like Reality TV itself is the next Sasquatch. Someday everybody will try to prove it really does exist..

Why am I not surprised?

It’s sad and embarrassing how some people will vehemently defend these types of shows as being “real”. Do I need to bring up the “Paranormal State Hoax” post?