Minnesota RoadKill Identified As A Badger 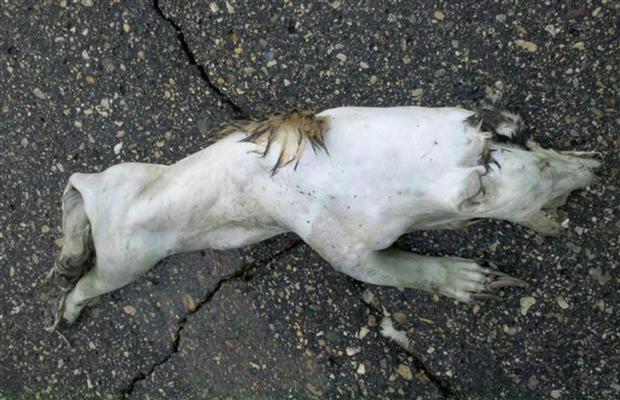 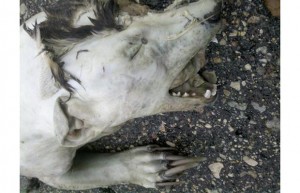 In a not so surprising outcome, the Department of Natural Resources released the following statement in regards to the “mystery roadkill creature” from Minnesota:

Kotts said there are clear signs that the animal was hit on the road, suffering skull fractures, but an intact jaw could help determine a positive identification. –source: Ksax

So what they are saying that although this dead carcass has a rather unusually long tail, every other feature about it points to it being some poor badger that met its fate crossing the road. I’m sure many are disappointed that the outcome came to a more natural explanation as opposed to something more…out of this world.

ALEXANDRIA, Minn. (KSAX) – Two days after Minnesota Department of Natural Resources officials brought in a mystery carcass, found in rural Douglas County, no positive identification has been made.

Kotts said there are clear signs that the animal was hit on the road, suffering skull fractures, but an intact jaw could help determine a positive identification.

He said he expects fur trappers who have more experience with local mammals to examine the carcass in the near future. Kotts said the animal was taken to the Glenwood D.N.R. office and it has since been frozen.

Kotts said the D.N.R. is considering burying the carcass to allow it to further decompose to aide the identification process, but wants to avoid any possible interference with dogs and is concerned its pungent smell may linger nearby.

The dead white mammal was spotted this week on a Douglas County road with five claws, dark tufts of hair on its back and head and long toenails.

Exclusive KSAX video of the carcass can be seen here. A warning, the images in the video may be disturbing.

Roadkill is nothing new for Minnesotans, but this curious creature got people talking.

Lacey Ilse said she was driving near her home on County Road 86, south of Alexandria, when she spotted the mysterious mammal.

“We saw something in the middle of the road, and we knew it wasn’t a dog or a cat, because it didn’t have hair. It had a clump of hair and all the rest was just white skin,” Ilse said.”it’s ear was all mis-shaped. To me, it looked like half-human.”

Ilse said she soon posted pictures of the animal on Facebook, and rumors and speculation took off.

Noelle Jones sent the pictures to KSAX Monday, and after posting them on the KSAX Facebook page that night, more than 175 comments have been posted about the unusual animal, with guesses ranging from a skunk, badger, wolverine, wolf, or even proof of the mythical chupacabra.

Folks in Alexandria Wednesday had their own ideas.

“First guess was a badger with like, a case of mange. But then, some other people were saying, like a chupacabra. and after looking at some pictures, I was like, ‘you know, it’s possible,” Jones said.

“It kinda looks like a 10-year-old wolf,” Austin Becker of Alexandria said.

“Almost looks like a pig, with paws? I don’t know, or a wolf,” Kaitlin Van Horn of Morris said.

Kotts used the process of elimination Wednesday to give his answer.

“It’s got five long front claws on each of its front feet, which would be characteristic of a badger,” Kotts said. “I ran the pictures past a few other DNR folks that have a lot of trapping and/or furbearer experience, and they all said, it’s hard to be 100 percent sure what it is … but if it’s a Minnesota animal, it’s probably a badger.”

But Ilse, and just about everyone else who has seen it, can’t be so sure.

“If you’re looking at the top half, it definitely looks like a dog that’s kind of been torn apart. But, I’m not sure what to make of the back part,” Igor Simanovich of the Twin Cities said.

“It’s a strange animal and i hope we don’t have anymore around here,” Jane Murphy of Alexandria said.

“You know how they do their government secret testing on animals? and I know it sounds crazy, but I’ve never seen an animal like this,” Ilse said

Jason Abraham, with the Department of Natural Resources, said he thinks it may be a domestic dog, but he is still left with questions.

“The head suggests a canine, very likely a domestic dog,” Abraham said. “However, the right front foot appears to have five toes, which is not typical for canines. Also, the long toenails are not typical for an active canine.”

Ilse said some of her guinea hens and cats are missing and suspects the animal or others in the area may be to blame. Several burrowed holes ranging from four to ten inches in size were also spotted near where the animal was found.