Can Religion and Extraterrestrial Life Coexist? 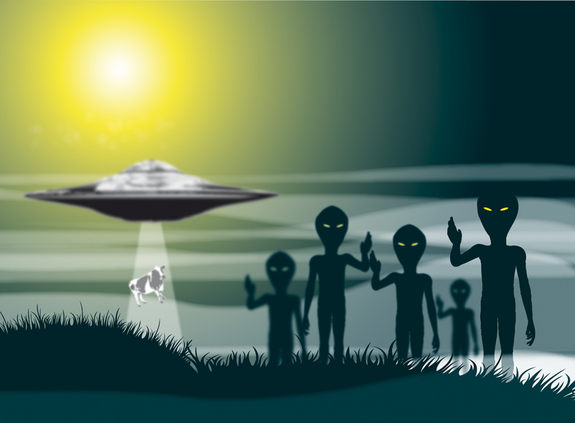 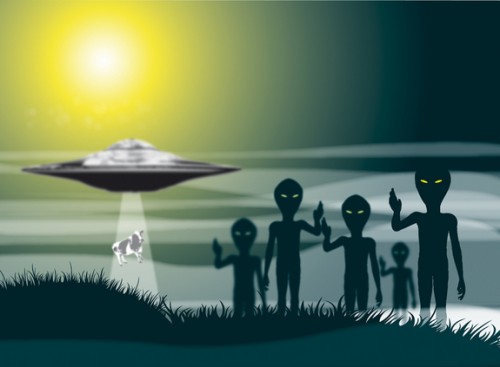 As a Christian I follow a guide for life called the Bible. However, there is (or reputed to be) nothing written in the text supporting the existence of life outside Earth.

There was much spirited debate at the recent DARPA sponsored 100 Year Starship Symposium held in Orlando Florida this past weekend. Though extremely controversial the Symposium decided to tackle questions surrounding Religion and the existence of intelligent Alien life.

As part of the discussion of issues surrounding travel to other stars; the subject was broached regarding how the discovery of E.T. would affect religion as well as more defined questions such as, who did Jesus die for if there is in fact, life on other planets?

The subject matter was debated vigorously with many valid points made as you will see in this exerpt from Space.com:

Are Aliens Part of God’s Plan, Too? Finding E.T. Could Change Religion Forever

ORLANDO, Fla. — The discovery of intelligent aliens would be mind-blowing in many respects, but it could present a special dilemma for the world’s religions, theologians pondering interstellar travel concepts said Saturday (Oct. 1).

Christians, in particular, might take the news hardest, because the Christian belief system does not easily allow for other intelligent beings in the universe, Christian thinkers said at the 100 Year Starship Symposium, a meeting sponsored by the Defense Advanced Research Projects Agency (DARPA) to discuss issues surrounding traveling to other stars.

In other words, “Did Jesus die for Klingons too?” as philosophy professor Christian Weidemannof Germany’s Ruhr-University Bochum titled his talk at a panel on the philosophical and religious considerations of visiting other worlds.

“According to Christianity, an historic event some 2,000 years ago was supposed to save the whole of creation,” Weidemann said. “You can grasp the conflict.”

Here’s how the debate goes: If the whole of creation includes 125 billion galaxies with hundreds of billions of stars in each, as astronomers think, then what if some of these stars have planets with advanced civilizations, too? Why would Jesus Christ have come to Earth, of all the inhabited planets in the universe, to save Earthlings and abandon the rest of God’s creatures?

Aliens and religion can still coexist

Weidemann, a self-described protestant Christian, suggested some possible solutions. Perhaps extraterrestrials aren’t sinners, like humans, and therefore aren’t in need of saving. However, the principle of mediocrity — the idea that your own example is most likely typical unless you have evidence to the contrary — casts doubt on this, he pointed out. [10 Wildest Ways to Contact Aliens]

“If there are extraterrestrial intelligent beings at all, it is safe to assume that most of them are sinners too,” Weidemann said. “If so, did Jesus save them too? My position is no. If so, our position among intelligent beings in the universe would be very exceptional.”

Another possibility is that God incarnated multiple times, sending a version of himself down to save each inhabited planet separately.

However, based on the best guesses of how many civilizations we might expect to exist in the universe, and how long planets and civilizations are expected to survive, God’s incarnations would have had to be in about 250 places simultaneously at any given time, assuming each incarnation took about 30 years, Weidemann calculated.

If God truly became corporeal and took human form when Jesus Christ was born, this wouldn’t have been possible, Weidemann said.

Rev. Thomas Hoffmann, a protestant pastor in Tulsa, Okla., said that the issues Weidemann raised were “really on target.”

“If life is discovered elsewhere, unfortunately we need to have more discussion about it,” Hoffmann said. “I think this is a very robust conversation we need to have.”

While the discovery of extraterrestrial intelligence would likely spur profound soul-searching for people of all faiths, many of the world’s religions might have an easier time accommodating the knowledge than Christianity, said theologist Michael Waltemathe, also of the Ruhr-University Bochum.

“It seems to be only a problem of Christianity,” Waltemathe said.

In Islam, for example, Muhammad was a prophet, or messenger of God, not God incarnate, so additional prophets could have simultaneously visited other planets to save extraterrestrial species, he said. And Hindus already believe in multiple deities, so accommodating more to guard over alien civilizations may not be difficult.

Ultimately, though, the discovery of intelligent aliens isn’t likely to pose a serious crisis for Christianity, either, Hoffmann said. After all, the religion has survived challenging scientific revelations before.

“Religion is essentially conservative,” Hoffmann told SPACE.com. “You can put almost anything in its face and it’s going to shake out a little bit, and then it’s going to drop right back down. We’ve seen this happen historically.”

Many Christians will tell you that if there were Alien civilizations then God would have surely told us about it in the Bible. My response has always been, why? Why does He need to tell us about anything happening outside of our world? The plain answer is, He doesn’t! At least that’s my perception and it makes perfect sense to me.

I’m sure there are a multitude of subjects that God never discusses in His Book and to assume that He would is not only presumptuous but arrogant in my opinion.

I see several possible scenarios where Religion and E.T. can coexist just fine.

Finally, consider the book of Ezekiel. Frankly it’s no stretch that you would draw specific conclusions from that text. Of course it may be otherwise but the wording certainly leaves you with a fairly obvious impression.

As I’m sure this is going to bring about some heated debate, please respect each other while making your point, thank you.