This recent image is making the rounds of UFO reporting sites of a “massive flying saucer” hovering over Scottsdale, Arizona. 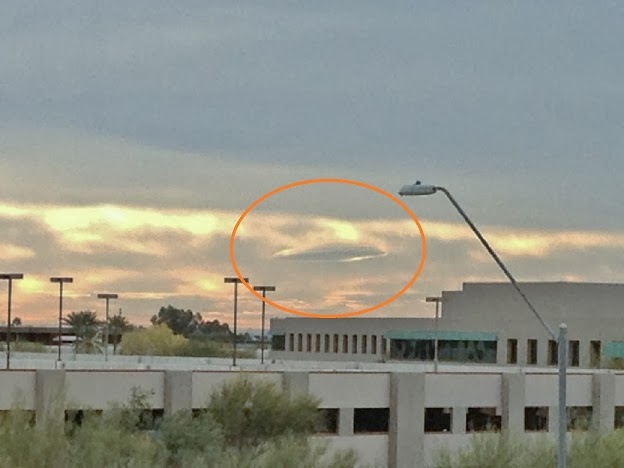 Before you blow up (and obviously manipulate in Photoshop) this image it looks like a cloud.

That this image has had color change done, and a contrast enhancement which brightens the bright spots making them look more like reflections off a metallic surface. A clear indication of manipulation, and as soon as you manipulate it you can be pretty certain you have also invalidated it. Yet even here it looks pretty exactly like a lenticular cloud.

But I could be wrong, let’s just wait and see if any other reports of giant UFO’s come in from Arizona. This object was reported sighted on the north side of Scottsdale, and the Scottsdale Municipal Airport is also located there. An object this large does not go unnoticed by the myriad small planes, police and news helicopters, kids flying kites, bird watchers or just average people, not so well trained in observation as those, who happen randomly to be looking generally… up.

As meteorologists go, I am pretty sure Punxsutawney Phil could id this one.