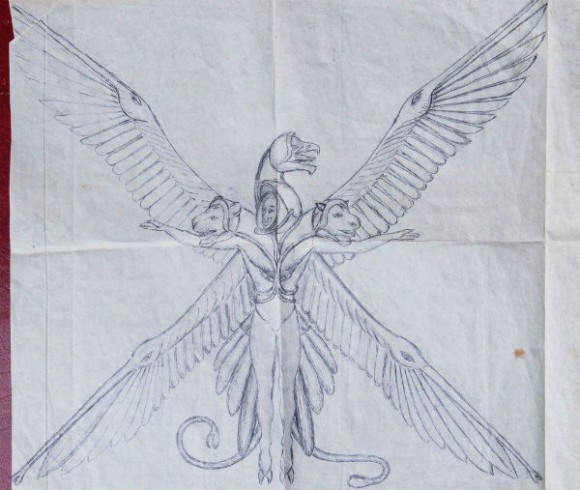 People throw away the darndest things. That fact does not make any of that trash evidence of anything.

They say one man’s trash is another man’s treasure and the internet has treasured a mysterious box containing notes and drawings of aliens which was found in the trash. Images of the odd find, posted on Reddit and Imgur, seem to illustrate a paranormal event.

Imgur user TramStopDan2 posted images of the box, said to measure approximately 29 inches by 38 inches, which contained large drawings. The wooden case was found discarded in the street by a friend, and when opened was ‘full of wonderful, crazy illustrations’. “Clearly something happened to this guy that was very memorable”, said Dan. 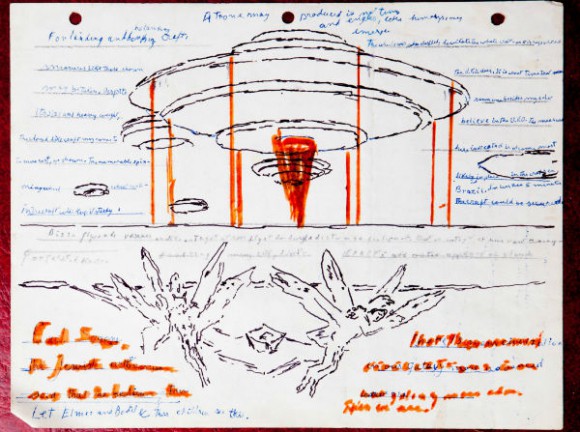 Nowhere in Ezekiel is there a description of aliens, only descriptions of Cherubim. Not the Renaissance Cherubim that look like chubby babies with wings, but the good Old Testament fire and brimstone Cherubim that show up and tell people stuff they don’t want to hear.

From the article in Neo Nettle

So do the illustrations detail ancient extraterrestrial memories and UFO activity dating back to the biblical era? Well the drawings certainly do deliver an insight into the mind of someone who may believe so. With the internet dismissing the art is merely ‘crazy’ or the work of a mad man, the find backed with other evidence could actually be shedding light on the paranormal history of humans and the Earth

Without information on the artist or their intent, you can make no claims about the reason for these drawings. If you are going to make this claim, then present the “other evidence.” I suspect you do not do so because there really is none beyond some other person’s opinion based upon fallacious and agenda driven interpretations of ancient texts. There is no “paranormal history” of Humans or the Earth. This episode is easily explained as a person with a lot of time on their hands happily entertaining themselves with interesting drawings based upon their TV viewing, or reading or whatever entertainment is their preference.

I have previously referred to the case of Henry Darger who, living a reclusive life in Chicago wrote and illustrated a fantasy novel which takes place on a planet around which Earth is merely a moon. A 15,145-page, single-spaced fantasy manuscript called The Story of the Vivian Girls, in What is Known as the Realms of the Unreal, of the Glandeco-Angelinian War Storm, Caused by the Child Slave Rebellion. No one I know of is suggesting this story might have some basis in fact.