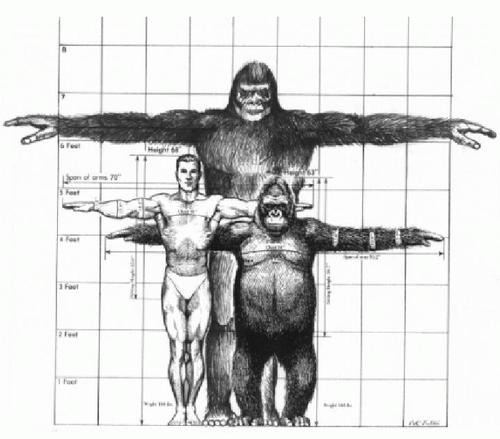 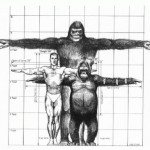 There have been several Bigfoot reports in the past few years from residents near the Tallapoosa County area in Alabama. In 2012 we broke the news reports about the strange sightings in Hale County and followed the story closely. As with all stories regarding the wandering ape-like creature, this one also fizzled out without much more information.

The 2012 Hale county sightings offered no real leads or information other than witnesses reporting a large gorilla ‘on the loose’. Fast forward two year, present day, and more Alabama strangeness is being reported. This time, Bigfoot researcher Jim Smith from the Alabama Bigfoot Society became a witness to what others have seen.

“Big Joe’ was spotted twice within about a 4 week time,” said Smith, 58 and founder of the Alabama Bigfoot Society.
According to the investigator, the first report was submitted by a woman who claimed to have been driving on the night of Halloween when they spotted the creature last year.

“There is a hunting trail that goes into the woods,” he said. ” When they came upon the curve, they looked out to the woods and saw the black Bigfoot walking down through the woods.”
And when Smith went to the area to investigate the report about a month later, he became a second witness.

“It was around thanksgiving week when I first saw him. When I came around the curve, that’s when I saw him. He wasn’t that far from the road, but he was walking down through the woods.”
“He was very muscular, he was very large, he was very wide, and he was also black,” he said about the animal.
Another man, who was reportedly traveling east on the same highway, said it was “almost dark” when he came across the creature.

“He only got about somewhere around 70 to 80 yards from this sign,” said Smith. “The sign is reflective, like all road signs are, and he said that when his lights hit it, he could see this Bigfoot, very tall Bigfoot.”
The man claimed that as he approached the beast, it strode across the road and that it “took only three steps to cross it” before vanishing into the woods.
“It takes about 9 steps to cross this road,” Smith said.

The alleged Sasquatch was described by the man as having “flowing hair” on the neck and head.
“The height of the Bigfoot… we took a ruler and we measured. The Bigfoot’s head was on this yellow sign, so we measured that and that would have made this particular Bigfoot, that I believe it was ‘Big Joe’ also, about 9 feet tall.”
An additional witness said it was Christmas Eve of the same year and that he and his family were driving west when they saw the “large black Bigfoot walking through a patch of woods” in the foggy afternoon.

It is not the first time that Smith has an encounter with this creature. He claims to have seen it many times throughout the years. The founder of the Alabaman research organization is a “no-kill” Sasquatch advocate aiming to protect the purported creature’s habitat.
“Only, when this first sighting occurred in Alabama, I didn’t know what a Bigfoot was. In those days we called it a ‘Giant Monkey’,” he told Cryptozoology News.