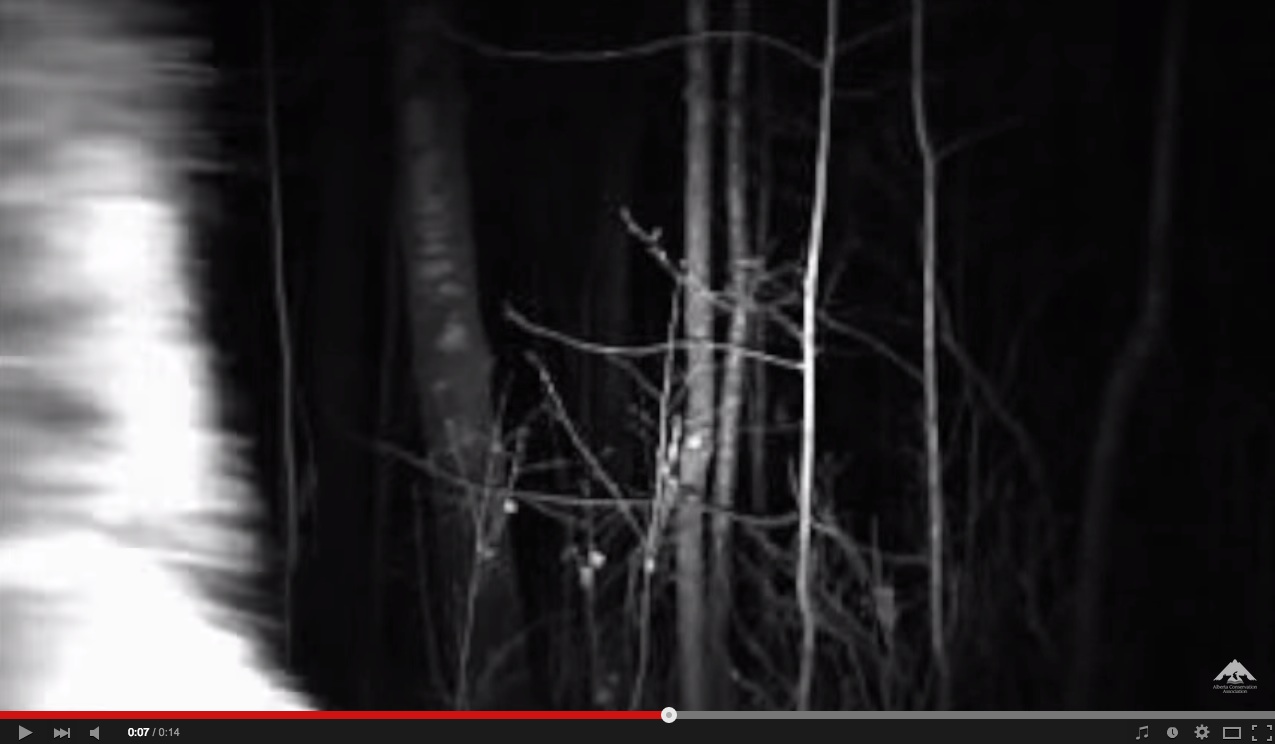 Update:
Thanks Jordon Flato for the head’s up:
APRIL FOOLS’!
Bigfoot does not exist on any of our conservation sites (as far as we know); however, there are over 700 CONSERVATION SITES across Alberta that are open to public, foot access, no charge and no permission required.
This weekend take your family out to some of these sites and Discover Alberta’s Wild Side: YOU NEVER KNOW WHAT YOU MIGHT DISCOVER!

The timing couldn’t be any worse for the Alberta Conservation, unless this really is an April Fool’s prank.

On March 3rd two biologists from the Alberta Conservation Association (ACA) spotted a strange set of tracks near one of the ACA’s conservation site. The tracks were unlike anything that they have seen out in the wilderness. The tracks were near the area where one of their best game cameras had been installed before. When they checked the footage, what they claim to have recorded will definitely send chills down your spine. Listen carefully to the inhuman grunt at the end of the video.

AB-conservation.com posted the following press release along with the video and photograph:

On March 3rd 2015, two Alberta Conservation Association (ACA) biologists were conducting a routine visit to one of ACA’s conservation sites when they came across a set of animal tracks they could not identify.
Stefanie Fenson and Dan Sturgess were hiking across a parcel of land owned by ACA (and open for public foot access) to retrieve photos from trail cameras that ACA has installed to monitor wildlife activity. 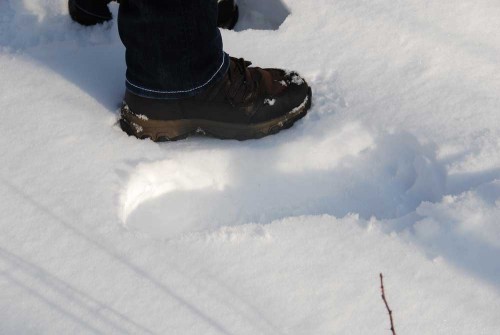 “I wasn’t really paying much attention as we were hiking along a well-used game trail to our first camera,” recalls Dan Sturgess, ACA biologist, “but then I happen to look down and notice a very strange track.”
“At first I thought it was a big cat track, and maybe it just looked like that because the the snow melted around the edges,” said Stefanie Fenson, ACA biologist. As the pair looked closer to identify the track, they realized it was not fitting with anything they had seen before.
“We followed the trail and there were very distinct toes showing in some of the impressions. The tracks had a very long stride, if I wanted to make the same step I would have to hop from one step to the next,” said Fenson. “My nature is to be skeptical about everything, so I was convinced that someone was messing with us.”

We joked that it was some poor guy who lost a bet and had to run naked through the forest, which would have explained the distinct toe foot prints, but not the size of the tracks or the length of the stride. We followed the tracks for about 300 metres until we came to our camera. We thought we would have a look at the video and see some guy waving back at us, but that’s not what we found,” said Sturgess.

What they found was a short video clip of something walking past the camera during the night before, something the two biologists could not immediately identify. “Because we were really curious as to what was making the tracks we immediately played the video. There were a couple videos of deer walking past, a moose, a few coyotes, and then the clip that gave me the shivers,” says Fenson.

“The video is at night so the image is infrared, but you can see something big and upright walk past. It is only a 20 second video, but as soon as it was done both Dan and I started scanning the forest around us. We wanted to make sure that thing on the camera wasn’t watching us. We couldn’t make out what it was on the video, we played it many times. Each time we would try to make it fit the description of a bear, or a moose, or something big and dark. We couldn’t make any of the physical features fit anything we could think of, plus the video had sound and it sounded like nothing I had heard before.”
“Although there was only a glimpse of the animal on the video it stuck around, breaking branches and making a strange growling sound. This was an animal of some type, but we could not figure out what, or at least we did not want to admit to each other what we thought it was.”

As trained biologists, Sturgess and Fenson began a more detailed assessment. “We looked for hair on branches where it looked like the animal would have pushed past. As luck would have it, we were able to collect two hair samples. Both were much higher up in the trees than we would have expected.”

“The hair was dark brown to black and very coarse and thick; much different from moose hair,” said Sturgess. The hair they collected was sent to a laboratory in BC for analysis and to date, it has not matched grizzly bear, black bear, moose, bison or muskox.
Dr. Todd Zimmerling, PhD., President and CEO of Alberta Conservation Association said, “We have just recently received the genetic analysis results and the hair isn’t a match for any known species it has been tested against and that is why we decided to make this press release. I have been a biologist for over 20 years and I realize the level of skepticism that this announcement will elicit from our peers, but I don’t have any other explanation. Between the tracks, the video and the hair sample it appears that we have evidence of the existence of a “bigfoot” type creature in Alberta. We will be meeting with our colleagues at ESRD to determine our next course of action.”​

Did the Alberta Conservation Association capture Bigfoot on video? Do they have definite proof (hair samples) of the mythical creature’s existence?

I have to admit that I find it difficult to believe that a hair sample analysis was done in the 3 weeks that the biologists found the evidence. However since they are biologists working for the ACA then maybe it’s not as difficult for them to have proper access to get those hair samples analyzed.

Is it a well-planned April Fool’s joke or the real thing? Only time will tell.