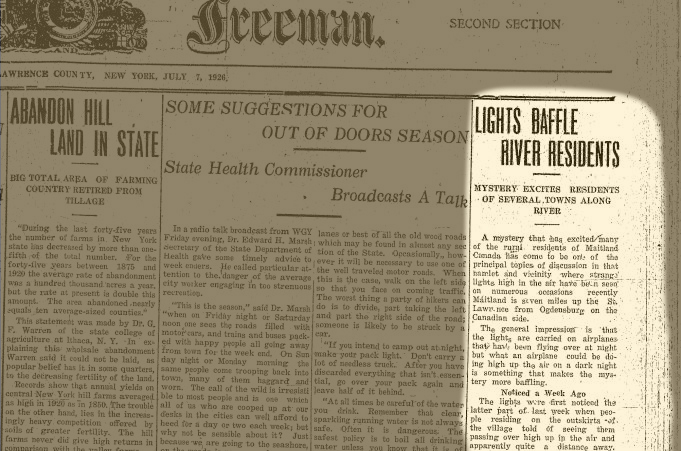 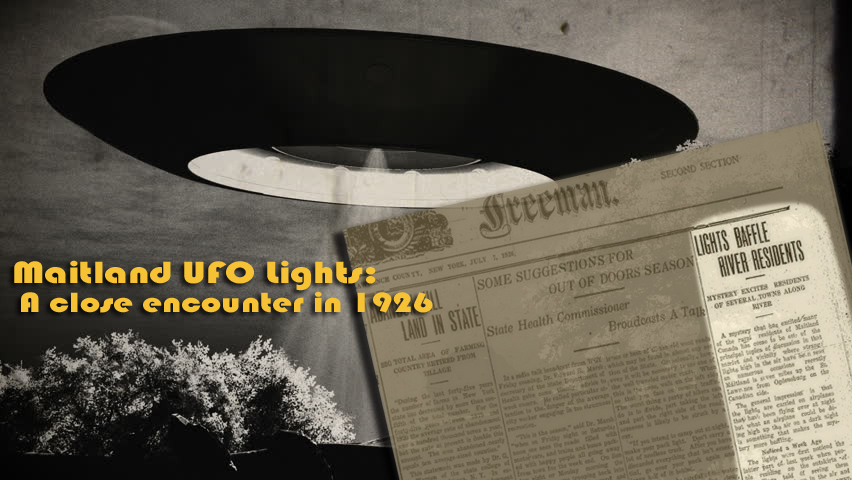 n a quiet and muggy July night in 1926 a woman awoke to loud noises outside of her house in the outskirts of rural Maitland, Canada. Looking outside she saw strange lights hovering a few hundred feet next to her farm. Terrified and confused, the woman couldn’t do anything but stare in complete disbelief of the otherworldly lights. What were they? Who were they?

As one of the lights got closer she managed to catch something staring at her from within the bright, bathing light. Not something but rather someone.

“…It was a figure. A figure of a gigantic man with something resembling a rifle in his hands.“

A mile from the woman’s terrifying encounter, up the St. Lawrence River, is the small town of Maitland. Where several residents had reported witnessing strange lights in the distant sky. According to the Courier & Freeman newspaper, the lights had been seen by some of the residents of Maitland. They reported seeing strange silent lights hovering above fields, with a bright searchlight beam scanning the ground.

“A mystery that has excited many of the rural residents of Maitland, Canada has come to be one of the pricipal topics of discussion in that hamlet and vicinity where strange lights high in the air have been seen on numerous occasions recently. Maitland is seven miles up the St. Lawrence from Ogdensburg on the Canadian side.

The general impression is that the lights are carried on airplanes that have been flying over at night but what an airplane could be doing high up on a dark night is something that makes the mystery more baffling.

Noticed a week ago.

The lights were first noticed the latter part of last week when people residing on the outskirts of the village told of seeing them passing over high up in the air and apparently quite a distance away. The lights as described by those who have seen them are like large and powerful automobile lights.

One farmer stated that the one he saw was more like a powerful search light and as he watched it the light was turned slightly to the left and right, throwing a long cone shaped ray far ahead…” –source: Courier & Freeman (Potsdam, N.Y.) 1926

In the report by Courier & Freeman, the interviewed farmer tells of the unnatural behavior of the lights as he describes a cone shaped light rotating and scanning the earth before fixing its gaze towards the horizon.

It was the same description of what other witnesses from the town of Maitland saw in the dark skies above their homes. The lights were described as large and powerful automobile lights by many. The report continues with more accounts of the eerie lights.

“Peter Cunningham a farmer residing east of Maitland in company with another farmer reported watching one of the strange lights passing high up in the air across country a few nights ago. He says that the lights seem to be far to the north, and that they were moving rapidly east to west towards the St. Lawrence river.

He declares the lights appeared to be moving at a rate that a rapidly moving airplane would make. He is convinced that the lights were attached to a flying machine of some description. He says that there were two lights and while he was not near enough to observe them, the rays the threw appeared like automobile lights at a distance. Cunningham and his companions watched the lights until the went out of sight towards the west.

If it was an airplane he says he heard no motor but attaches no significance to that as the lights appeared to be three or four miles north of the place where they sighted them. Other farmers tell of having seen these strange little moving lights in the sky at night.

Reports from the vicinity of Prescott are similar to those that come from Maitland. One man a farmer residing near the village as well as the other people living in the neighborhood, have seen these strange lights in the sky on two or three occasions. He tells of coming from one of the lots towards the back of the farm where he had been looking after the planting when he noticed what he believes to have been three airplanes going over.

The head one he says carried a powerful searchlight that was turned downward once its bright rays falling on a pasture of a neighbor, where it frightened several horses and cattle and in the rats of the powerful light he could see them scurrying and stampeding.” –source: Courier & Freeman (Potsdam, N.Y.) 1926

The reports continue with more detailed accounts of the lights. Most people agreed with the description of the lights being like those of an automobile’s headlights except bigger and more powerful and at times moving rapidly through the sky.

The farmer in Prescott added something more to the description. Like the woman who lived in the outskirts of Maitland, he was able to see something  else up there besides the lights. Something that looked to him to be aircraft. Three of them to be specific. The farmer describes one of the aircrafts carrying the large search beam and pointing to downwards onto pasture. Where it spooked the horses and cattle.

CLOSE ENCOUNTER OF THE THIRD KIND

Lights in the same spot.

“The strangest story however comes from a woman residing a mile this side of Brockville, who claims that on two occasions she has seen strange lights in the sky during the past fortnight but that they stayed in one place in the darkness 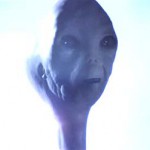 hundreds of feet from the ground. In the circle of light she says she saw the figure of a gigantic man with something resembling a rifle in his hands.

There is considerable speculation regarding the mysterious lights but the general theory appears that they are from airships which are being employed by smugglers to transport contraband. It is likely that unless a change is brought about the dry laws…”

What transpired during those few summer nights in 1926 on the border of Canada and upstate New York? What were those lights that had residents terrified and dumbfounded? Like the news clipping suggests, the theory of bootleggers and their crafty airships is a far stretch. Then again so is proposing that alien ships descended near the small town of Maitland in the 1920s.

However there’s the account of the woman who lived a mile or so down the river who happened to catch a glimpse of the occupants in one of those hovering lights. A glimpse that qualifies her account as a close encounter of the third kind. A visual encounter of an alien/humanoid being. However that does very little to the credibility of every witness to those strange lights over Maitland in 1926.

We’ll never know what these lights were that scared the residents of the small town on the Canadian border. It was almost a century ago. However this long forgotten news article, pulled from the archives will help cement the town of Maitland as one of the earliest ‘close encounter’ cases in modern history.