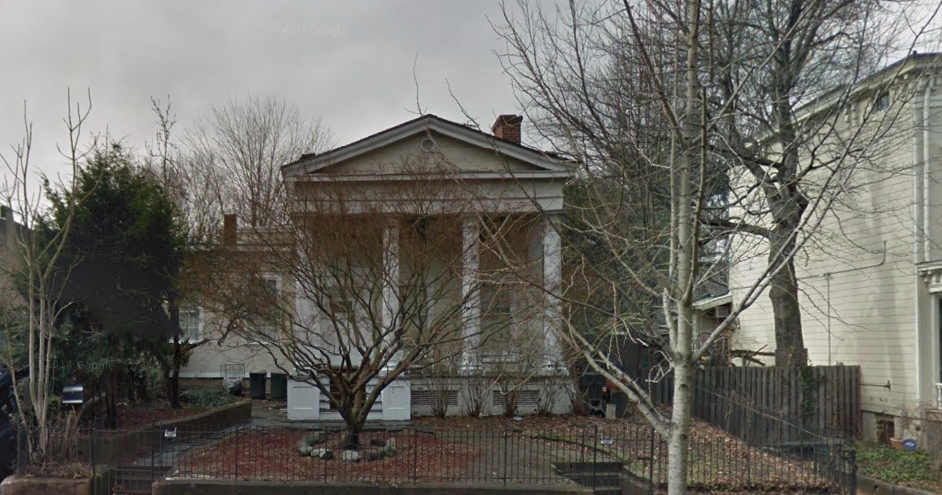 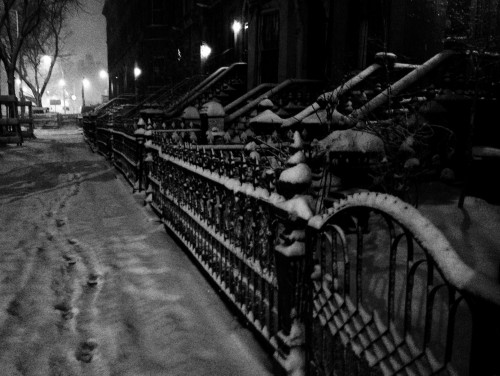 On a cold December night in 1878 Edward F. Smith decided to walk down to the Myrtle avenue police station. He hadn’t had much sleep in the past two weeks and was beginning to question his own sanity.

Mr. Smith was as passionate as a skeptic as he was a master builder. He worked in a world with tangible objects, and rational fears. A world where ghosts and spirits were nothing but mere tales for distraction. However for the past few weeks Edward, his wife and his two young daughters had been terrorized by what they could only assume were phantoms living inside their old Knickerbocker-styled home on Clinton avenue in Brooklyn, New York.

Barging through the precinct’s doors Edward rattled the late-shift awake. The few police officers unfortunate enough to work the late shift that cold night stopped and stared at the wild-eyed man. The man’s bloodshot eyes conveyed a sense of deep disturbance and a desperate plead for help: “I need help. Someone has to help us.”

Edward told the officers about strange and disturbing activity occurring in his home on Clinton avenue. He reported that someone or something had been pestering his family by ringing the front door excessively. Ringing in the middle of the night and when he ran to check, there would be no one at the door. Edward went on to tell them that it wasn’t just the ringing of the bell, but also loud knocks on their front door. There was also something else. Something terrifying enough that had made Edward trek down the icy streets to the police station in the middle of the night.

He told the officers about his dinning room. About how it and the kitchen were separated by heavy doors. Doors that shook violently at night as if someone was trying to shake them off their hinges. The officers looked at each other with yawning disbelief. However seeing how upset and shaken Edward had become while explaining his situation, Detective Price decided it was worth investigating. On a Wednesday night Detective Price, along with a few other fellow officers, went to investigate 136 Clinton avenue.

Four corinthian pillars stood before the Smith’s front door. A respectable entryway for a respectable, two story affair. But the men were not there to marvel at the the old colonial architecture, they were there to investigate the supposed phantom ringer. They first performed a visual examination of the doorbell, it revealed nothing unusual. Inside the residence the police were greeted by a nervous, almost panicked, Mrs. Smith. The couples young daughters were also present and like their mother, terrified with what was happening inside their home.

Price instructed one of the officers to stand by the front door and sit and wait for the bell to be rung. When it did, he was to 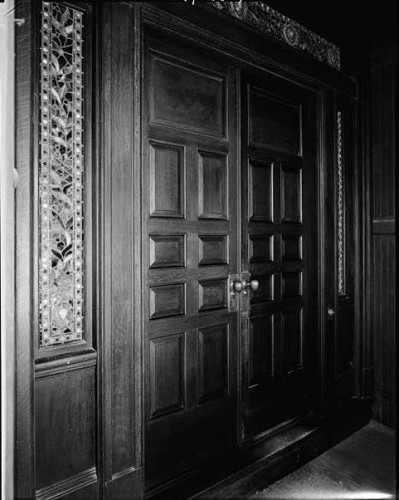 immediately open the door. He instructed the other one to hide and wait by the dinning room, ready to pounce on the would-be pranksters Price was convinced was behind the phantom noises. During the middle of the night, as the Smith’s daughters lay in bed and their concerned parents entertained their guarding guests,  as it had done for the past few weeks, the front door bell rang.  It’s metallic ringing echoed through the cold, dark house. Everyone froze.

The officer standing-by opened the door expecting to catch a child prankster in mid-act. Instead, he was greeted by the same uneasy emptiness that had been greeting the Smiths. The confused officer checked around and behind the massive pillars by the front door. Nothing, no one in sight. When asked, the officer told the detective that he had only felt a freezing gust of wind blow past him. He said that after the bell rang and he opened the door there wasn’t a soul in sight. The three policemen did a perimeter check of the property. The front porch sat about forty feet back from the main street. The property was fenced and it would have taken someone a considerable amount of effort and skills to run across the yard undetected and jump over the fence before the bell was answered. The uneasiness soon spread from one of the men to the other two, like the heavy coldness that began to creep in.

They went back to the doorbell and this time really taking their time to examine the rig. However the baffled police found nothing out of the ordinary. No tricks, no wires, no mysterious springs that could have set off the bell. It became apparent to the policemen that the bell only rang because someone pressed the lever. The police came back to the family perturbed and empty handed. Just then the doors that separated the dinning room began to shake in a violent manner. Everyone in the living room jumped at the loud banging and thrashing noises the instantly filled the residence on 136 Clinton avenue.

The deafening clattering and banging against the doors shook the house’s skeleton. Strong and loud enough to make Edward think that the once solid structure was about to collapse on top of them. However just as the thunderous ruckus appeared to be shaking the entire house off its foundation, it abruptly ceased. Like the creeping cold, a dead silence soon engulfed the nervous crowd.

Upstairs, the two girls had slept peacefully. Unaware of the  bedlam below.

The men inspected the entire house and the outside and found no signs of another person, prankster or not, outside in the freezing cold. It was then suggested that they sprinkle flour and ashes near the doors to try and catch the intruder’s footprints. Once the trap was set, they all went back into the living room and waited.

Not long after that the banging and ringing broke the silence once again.  Immediately the officers went to check on the traps they had set. They anticipated finding footprints that would lead them to the hidden prankster. When they neared the front door the ringing stopped. Again they found no one on the other side of the door. Inspecting the flour and ash mixture yielded no settling answers. The flour remained undisturbed throughout the house even though the ringing and banging of the doors sounded louder and more aggressive than before.

Detective Price threw his hands up in despair. “This is too much…it’s beyond me.”

Just then, in plain sight of the detective and everyone else, three loud knocks reverberated off the opened front door. The keen-eyed detective stared at the emptiness in front of him,  trying to make out a silhouette or a hand of the phantom knocker he had come to believe in. It was then that a brick crashed through one of the living room windows, landing on the wooded flooring with a heavy thud. The two officers quickly ran outside and just like before, found not a living soul out in the streets.

The night sky dissolved into a crimson hue as the sun warmed away the frost. Inside the house Edward stoked the fire as his wife poured coffee for them both, another sleepless night had passed and the Smiths were on edge. The police had left just hours before and were of no help besides proving to the Edward and his family that they were not crazy. That something supernatural was occurring inside 136 Clinton avenue. That following night a small crowd had gathered outside the Smith’s residence. Curious onlookers stood outside for hours, hoping to catch a glimpse of the ghostly activities they’ve come to hear about the place. 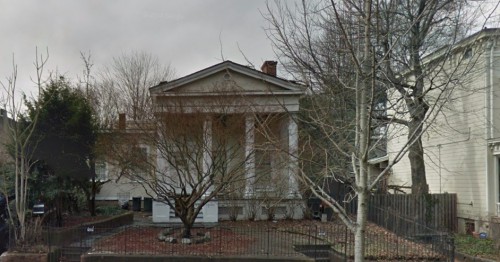 Mrs. Smith looked out her window to see neighbors, friends, and strangers all gathering outside her home. She saw a group of policemen part through the throng of onlookers and walk up to her front door. It was Detective Price with other uniformed men. The detective introduce Captain Mclaughlin and his squad to Edward and his wife. The captain assured the couple that they would do anything in their power to help them with the situation. An assurance that both the Smiths and the detective knew meant nothing. The captain’s words fell on listless stares.

Detective Price had noticed that Edward had muffled the bell next to the door by wrapping it and jamming it up with some cloth. It had been done out of desperation, a shoddy temporary fix from the master builder who by now was visibly overwhelmed by the unseen forces that fell upon his home.

Weeks passed and the poltergeist activity lessened around the house. Months after their terrifying ordeal started, the Smiths reported that only light tappings could occasionally be heard throughout their home. Neighbors and officers soon forgot about the haunting that reportedly plagued the Smith residence. The bell ringing, the shaking shutters, and the breaking windows soon ceased and tranquility once again fell upon Clinton avenue. No explanation was ever given for what happened inside the Smith residence.

To this day, the house stands tall with its prominent pillars facing Clinton street. Holding up the dark history behind one of Brooklyn’s classic poltergeist cases.

This story is based on the newspaper clippings of the New York The Sun newspaper, December 20th, 1878: