The Night A UFO Landed In Levelland Texas 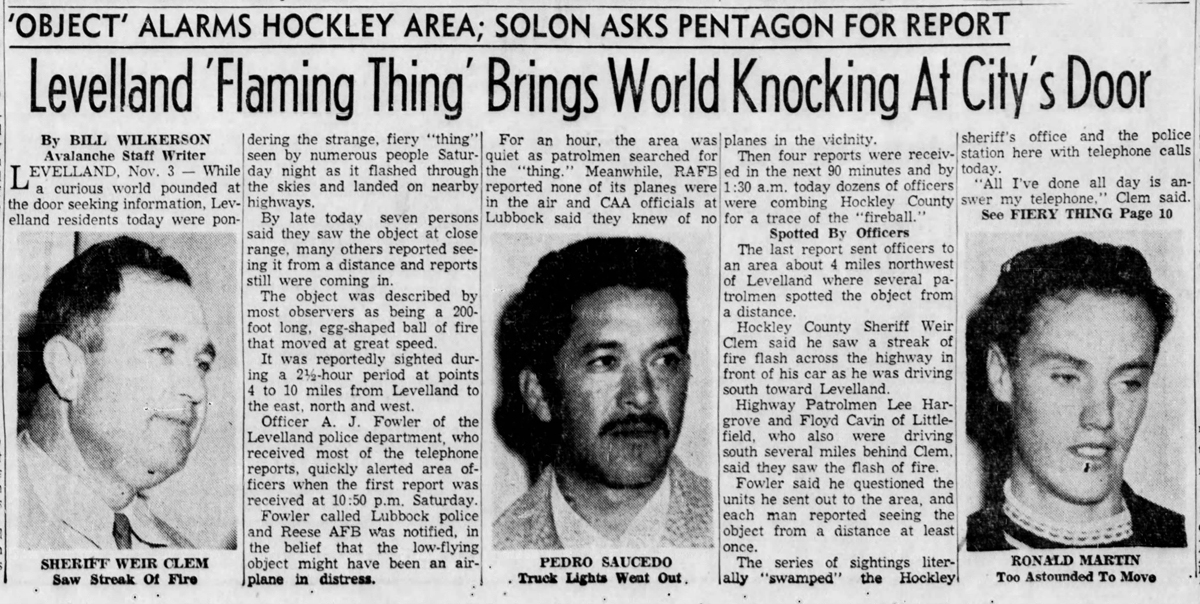 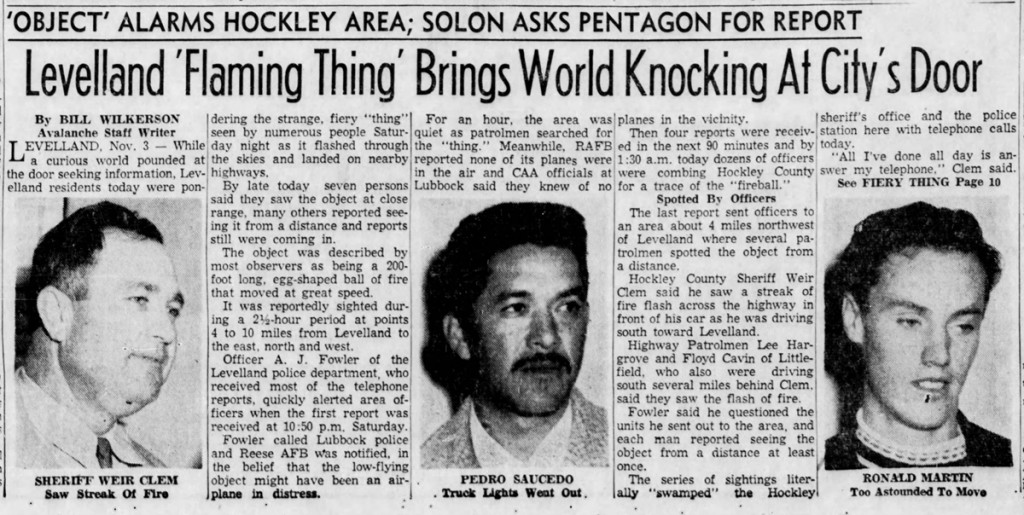 On November 2nd, 1957, immigrant farmers Pedro Saucedo and Joe Salaz were driving down an isolated Texan road when they saw a blue flash of light. Immediately afterwards their truck crawled to a halt. Its engine sputtered to a dead stop as the men witnessed a strange object rise up from the near distance and approach their vehicle. Pedro jumped out of the truck and hid in the brush while Joe, possibly paralyzed with fear, stayed inside.

What they described to be a “rocket-shaped object” flew directly over their vehicle, rocking it violently as it flew past. Both men felt the object’s intense radiating heat and wind gust as it disappeared into the horizon. Pedro emerged from the brush shaken and puzzled. Looking at his friend for an explanation. The truck’s engine started back up and the men decided to find a pay phone to alert the authorities of what they had just witnessed in the Texan desert. Unbeknownst to them both, there would be several other encounters that night. The night the strange craft landed on Levelland Texas.

The phone call came in that night to the Levelland police station and officer A.J. Fowler answered. Upon hearing the story from a obviously shaken Pedro, Fowler couldn’t believe that what he had heard was anything but a joke. He chose to ignore the call however an hour later, the phone rang again. This time, another motorist reported seeing the same thing.

Jim Wheeler was driving dow the same route when he spotted a “brilliantly lit, egg-shaped object” sitting right smack on the middle of the road. He estimated that it measured about 200 feet in length. He then told the officer that his vehicle stalled when he got close to the object. As he got out of his car, the object rose off the road and took off at incredible speeds. Like before, the caller reported that as soon as it left, the car’s engine started back up.

Then at 10:55 P.M. that same night another phone call came in. This time from a married couple who were driving northeast of Levelland. They also reported seeing a bright flash moving across the sky, killing their car’s headlights and radio for what they reported to be at least a few seconds. After taking the couple’s statement the officer began to suspect that something was out there, spooking the motorist. Not long after his last phone call, about five minutes later, the phone rang again.

Jose Alvarez was traveling north of Levelland when he met with the strange object sitting on the road. Like the others before him, Jose reported that his car’s engine stalled when approaching the craft. Only to start up again once the craft departed into the night sky.

By this time officer Fowler began taking the reports seriously. Five minutes after midnight, the phone rang once again. Fowler picked up knowing exactly what the caller on the other end was about to report.

Newell Wright, a Texas Tech student was driving when he noticed that his car began having troubles. Wright went on to report: “the ammeter on the dash jumped to discharge and then back to normal, and the motor started cutting out like it was out of gas…the car rolled to a stop; then the headlights dimmed and several seconds later went out.” As Wright stepped out of his vehicle to inspect it, he noticed a large egg-shaped object on the road up ahead. Once again, Fowler learned that when the object took off, the car’s engine cut back on.

Ten minutes later, another call. This time Fowler, pencil in hand, anxiously picked up. Frank Williams told the officer that he had encountered a brightly glowing object resting on the road. Like all other callers before him, Williams reported that his car’s headlights and engine went out as he approached it. Only to cut back on when the craft flew away.

12:45 A.M., 1:115 A.M., two more calls had come in. Ronald Martin and James Long, two motorist traveling down the same path both reported seeing the brightly lit craft on the road in front of them. In both cases, just like the others before them, they reported that their cars stalled, only to start up once the object took off. Around 1:45 A.M Fire Chief Ray Jones had also called in to report the bright object and his vehicle also coming to a sputtering halt.

Early that November 3rd several Levelland police officers were already out, actively following up the strange reports that had been made throughout the night. Amongst them was Sheriff Weir Clem, who himself had witnessed that same craft around 1:30 A.M.

In total, 15 phone calls were made to the Levelland police station. Each witnessed described seeing the exact same type of craft and experiencing the same, mechanical and electrical malfunctions of their vehicle.

As news of the sightings spread nationwide, the US Air Force got wind of it and sent one of its sergeants to the town of Levelland to investigate. Spending a total of seven hours interviewing only three witnesses (Saucedo, Wheeler, and Wright) the sergeant concluded that what they had witnessed was nothing more than a case of ball lightning. The Air Force’s panacea to all things 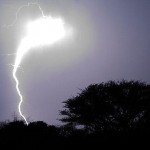 unexplainable that come from the sky.

Project Blue Book’s take on the Levelland incident was nothing short of bigotry entwined with a lazy investigation. Concluding that Pedro Saucedo wasn’t a credible witness because he had only a grade school education and had “no concept of direction”,  dismissing his story entirely. Furthermore adding that what he and the others had seen was just lightning since there was an electrical storm that night. Under that pretext, the Air Force concluded that the vehicles stalled due to “wet electrical circuits” caused by the passing storm.

Dr. Donald Menzel, a professor of astronomy at Harvard and a prominent UFO researcher agreed with the US Air Force and their explanation of ball lightning. Stating that “Only the saucer proponents could have converted so trivial a series of events – a few stalled automobiles, balls of flame in the sky at the end of the thunderstorm – into a national mystery.”

And just like that, the incredible account of fifteen witnesses was dismissed as nothing more than misidentification of lightning seen by overly excited UFO enthusiasts.