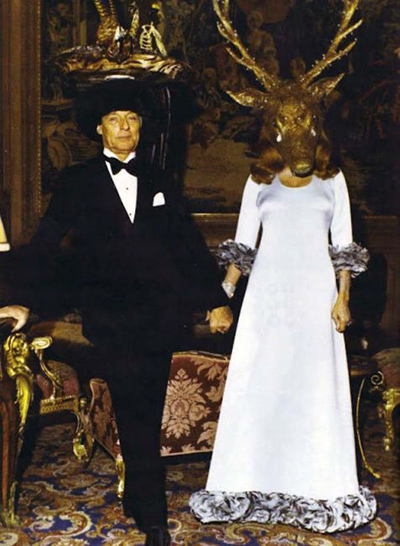 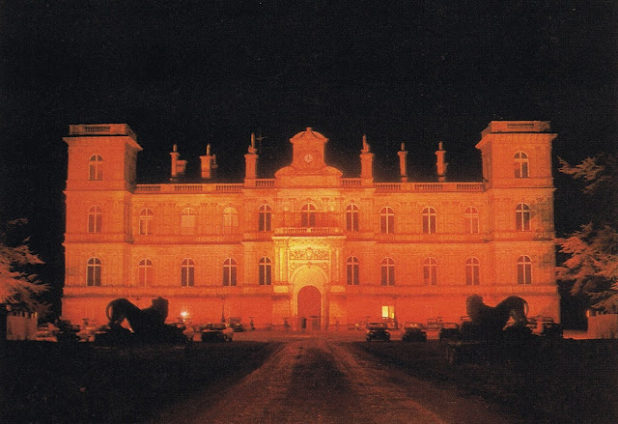 If you were part of the high society in France in 1972 then you would have probably received and invitation from socialite Marie Hélène de Rothschild, of the ultra-wealthy Rothschild family. An invitation to the infamous Surrealist Ball where the likes of Salvador Dali, Baron Alexis de Redé, and Hepburn were in attendance.

The Surrealist Ball was held at Rothchild’s Château de Ferrières. Where she had ordered moving amber lights projected upon the building’s facade, illuminating it in a fiery glow. Guests who drove up the Château’s driveway would have seen the hellish structure standing out from the surrounding darkness. 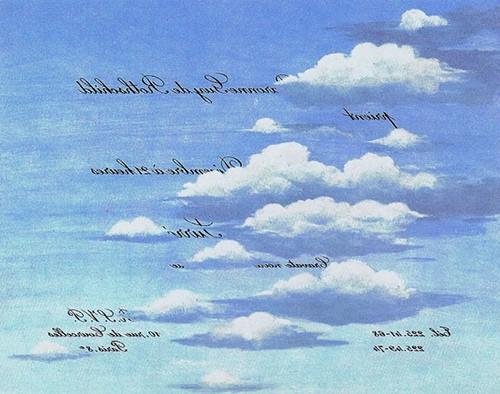 The invitations themselves were a work of art. Pictured above, the invitations were written backwards and were meant to be read via a mirror.  Attire requirements read: “Black tie, long dresses, & Surrealist heads”.

Once inside the burning building the dreamscape weaved by Marie was set to engulf you and take you through a trip of your darkest and wildest imagination. If you were planning on dropping acid, that definitely wasn’t the place for it.

As you stepped foot inside the Château, you were greeted by several servants and footmen who were dressed up as cats. They were leisurely awaiting the guests and in various states of repose throughout the spiral stairs.  A scene almost reminiscent of the yapping sex slave in a dog suit in Stephen King’s book ‘The Shining’.

Once you made your way past the cat people, you came upon  a maze of ribbons and other fabrics entwined to make you believe you were descending into the depths of Marie’s wild imagination, into her lair. If you made it out, you would have been greeted by the hostess herself.

Marie-Hélène was at the end of the labyrinth, ready to greet the partygoers. She dressed in a regal long white dress with a stag mask that cried tears of diamonds from its eyes.

The party’s surrealist theme extended all the way to the courses served that night. The lavish food, decor, and centerpieces were carefully and methodically arranged by Marie herself. In a full expression of her artistic abilities and attention to details.

“Marie Hélène proved that she had the flare and imagination to create something unique and worthwhile. None of this was created by charm alone. It needed a degree of ruthless determination. She attended to every minute detail of style in her life and also in her entertaining. She was a great hostess with all the qualities. She loved parties and people…” – Baron Alexis de Redé 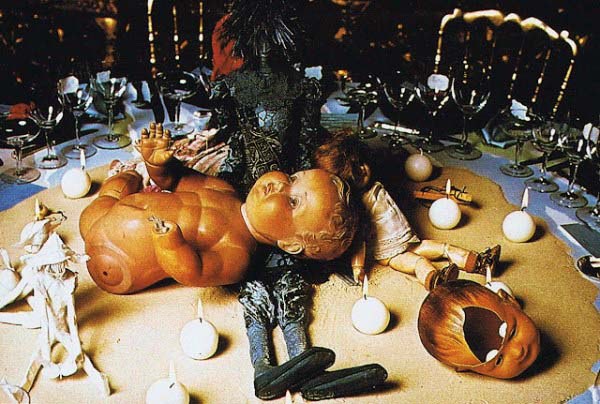 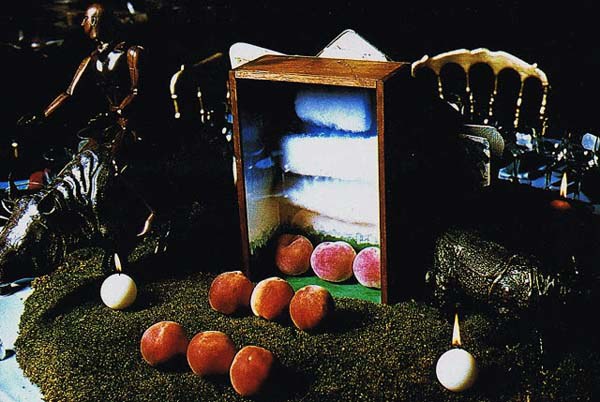 “…She was forever in quest of new talent and new figures to entertain from the world of the arts, literature, dance and haute couture. She mixed them with the more established set of Paris society.  Everyone was intrigued. Marie-Hélène’s parties took on such importance that one social figure threatened to commit suicide unless she was invited.” – Baron Alexis de Redé 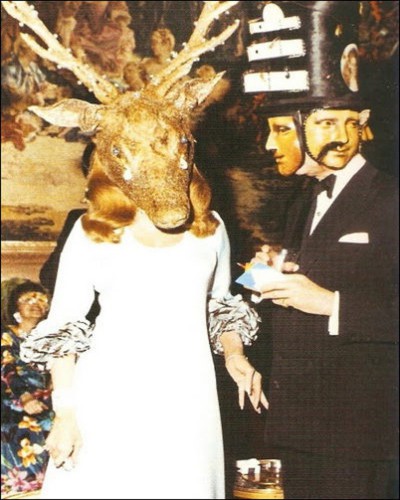 So coveted were Marie’s parties that the rumor goes that a prominent social figure had threatened to commit suicide if she wasn’t invited. I don’t know if that speaks volumes for how lavish and desired the parties had become or the entitled capricious behavior of that person. Either way, what happened inside those glowing walls was something to be witnessed in person.

As expected, Salvador Dali was in attendance that night. The surrealist painter was commisioned by Baron Alexis de Redé to create his spectacular two-faced mask that eerily complimented Marie’s stag costume.

Photographs of the party guests that night surfaced on the internet sometime in the 1990s and they’re as outlandish and imaginative as one would have expected. Painted faces and ridiculously adorned heads culminated the rich and wealthy’s imagination in the post-hippie era.

Food, alcohol and drugs were of course available to anyone who wanted to partake. However taking a look at some of the photographs, I’m sure drugs weren’t needed to enjoy the out-of-this-world costumes. 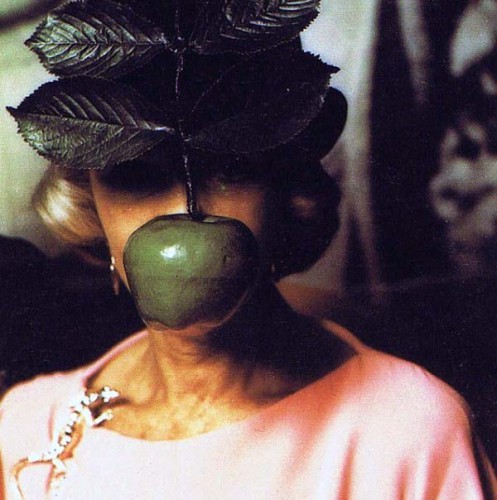 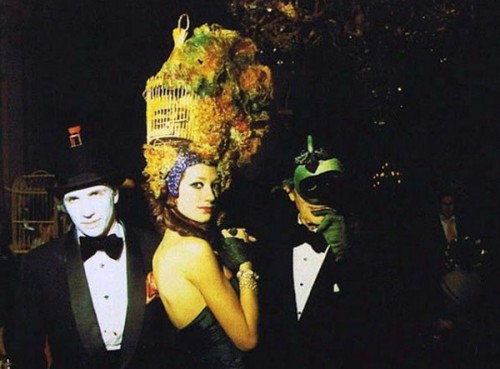 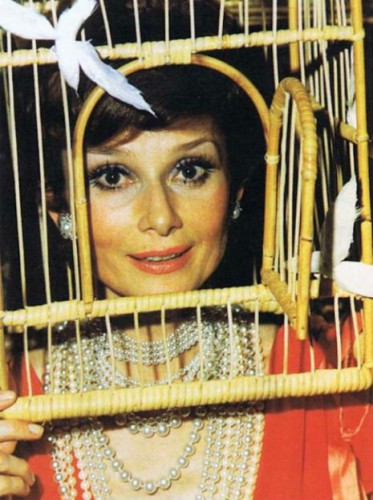 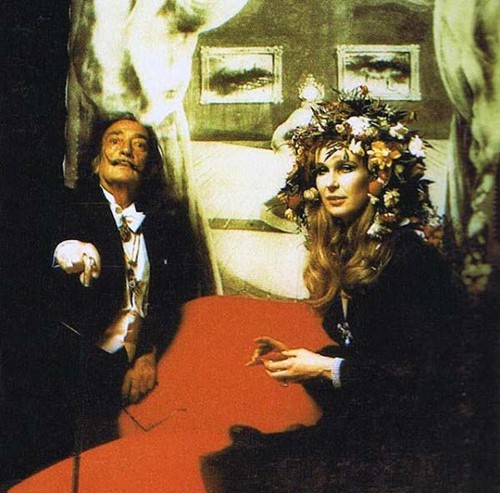