A Werewolf In The Bronx

Winter, 1913. On a frosty and dark winter night a misty coldness descended upon New York. The cold crept along the parks and streets of the Bronx, seeping in through every crack and crevice of every respectful home scattered about. Near the Mosholu Parkway, just below the dense tree line that existed back then, something strange lurked. A creature described as ‘werewolf like’  by those unlucky enough to have stumbled across its path at night. Even more astonishing was the fact that many were also describing a soft glow emanating from the creature.

Many believed this to be a rumor, however one late December night the creature stepped out of the shadows and into the sleepy streets of the Bronx.That night, the phones rang off the hooks at the Kingsbridge Police station. The reports were bizarre and the callers sounded frantic. Whatever it was that the callers were reporting, undoubtedly sent extra chills down their spines that cold night. 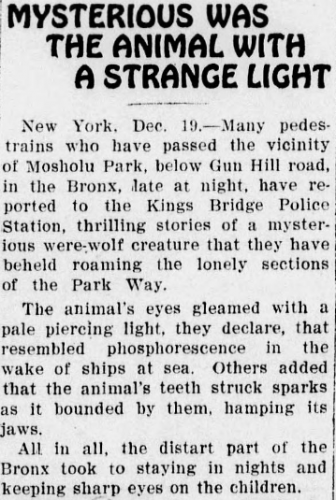 “The animal’s eyes gleamed with a pale piercing light” reported a witness, adding that the light “resembled phosphorescence in the wake of ships at sea.” Others reported sparks flying out the creature’s mouth as it snarled at them. A creature they could only described as werewolf-like.

A horrible beast, a mutated canine of sorts with a pair of glowing eyes. However absurd or horrifying the reports seemed, the Bronx Precinct had a duty to venture out in the cold and investigate. That night the Kingsbridge station sent down a few of their men to investigate the source of these frantic callers. Kingsbridge’s Police Captain, Matt Mekeon issued an alert to his squad to be on the lookout for the supposed werewolf as well as a recent mugging that had occurred near the Mosholu Parkway. 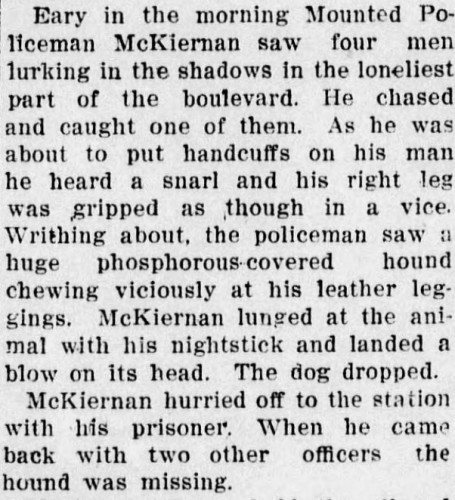 While patrolling the desolate parkway, Officer Mckiernan came across four suspicious men who were loitering around an unlit area of the parkway. Thinking that these might be the muggers, he approached the four men. The men suddenly took off running in different directions and a short chase ensued ending with Officer Mckiernan catching one of the suspects. As the policeman cuffed the perp, a sudden sharp pain shot up the officer’s leg. Looking down at his leg he was horrified to see what he could only describe as a ‘phosphorous-covered hound’ clamping down on his boot.

The officer acted quickly and used his nightstick to deliver a heavy blow to the creature’s skull, forcing it to release the officer’s leg from its vice-like grip. The officer and his perp were able to get away from the glowing creature and make it back to the precinct safely. After booking the man at the station, the officer told the rest of the men of what transpired out by the parkway. Soon, a squad of the men from the Kingsbridge precinct made their way to the exact spot the beast had taken a beating from the frightened officer’s nightstick. To their relief, there was no beast in sight.  No glowing set of eyes, no bulking canine dosed in a phosphorous glow.

The Parkway remained still, frozen in an eerie silence until the warming sun broke. A soft morning glow that pushed back the icy shadows and its eerie inhabitants for at least another day that winter in 1913.

The report of this bizarre claim comes from the 1913 December 19th edition of the Santa Fe New Mexican newspaper. What the residents of the Bronx experienced that December night we will probably never know. However the question remains: What caused them to think this could have been a glowing werewolf? Could it have been over imagination? Or possibly an episode of mass hysteria in the Bronx?

Skinwalker stories are not a product of modern entertainment or Hollywood. The stories come from generations of Native Americans from all over the U.S. From people of this land that honed the peculiar skill of observation. Observing nature and animals to learn how to live of the land and be in harmony with Mother Earth. From them, the stories of Skinwalkers and ‘were-creatures’ come from here in the states.

To this day, many people from different backgrounds claim to have come across creatures that resemble six-foot tall timberwolves walking and running on two legs. Bipedal upright canids, that differ in description from Sasquatch sightings. Whether you believe it or not, people are still reporting them to this day.