Chicago Phantom: The strange sightings of a flying humanoid 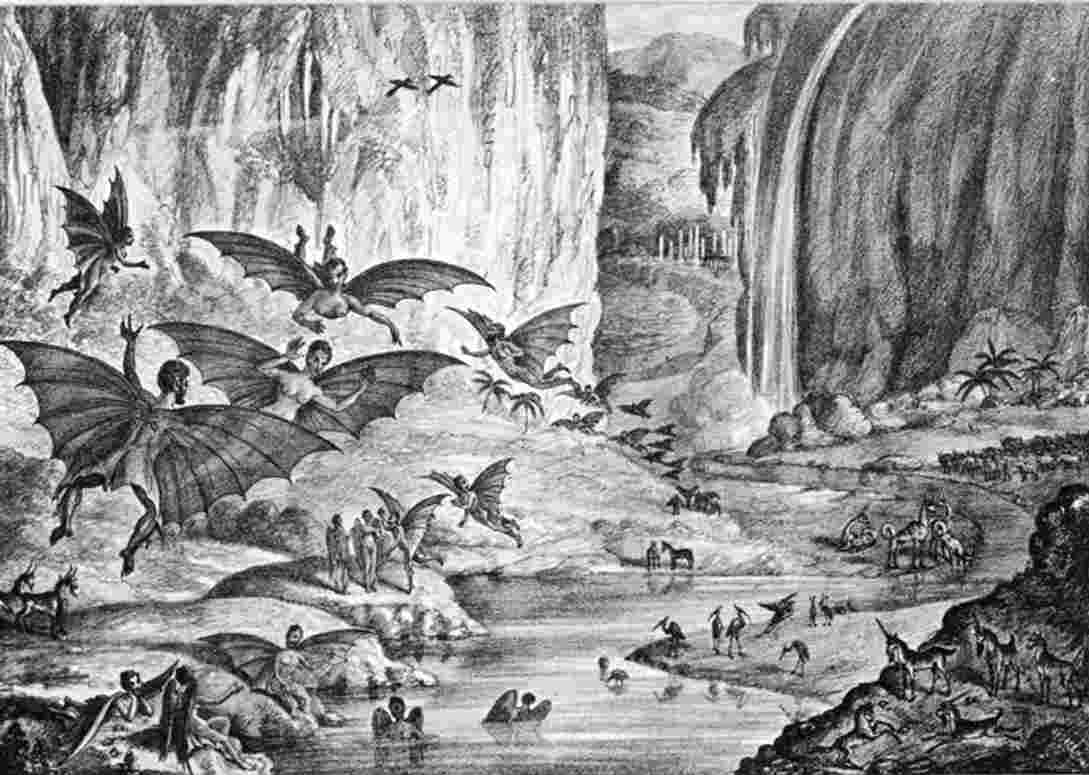 There’s something strange and creepy happening in the streets of Chicago. Over the last few months, there’s been over a dozen reported sightings of what many claim to be a winged-humanoid type of “thing” flying throughout the city of Chicago. It has been reported all over the web, with dozens of sightings from a multitude of witnesses who all described seeing a flying man-bat.

The incidents are eerily identical of the mayhem and chaos that surrounded Point Pleasant, West Virginia in the late to mid 1960s. When the legendary Mothman made its first appearance. However the description of the creature in these new reports differ from the Mothman. The following account comes from an anonymous Chicago police officer:

I’m going to tell you about something that happened to me on the 9th of June 29th 2017 in Chicago Illinois. I am reporting this of my own volition and I am wanting to stay anonymous due to the fact that I work for the Chicago Police Department and do not want anybody else to know that I submitted this report. I have been with the Chicago Police Department for over eight and a half years.

On the night of June 29th 2017 at approximately 11:15 p.m. my partner and I were on routine patrol and approaching the intersection West 81st and South Throop in the Auburn Gresham neighborhood of Chicago Illinois. We were flagged down by a group of a people who were pointing up to the top of an apartment  building that was on the corner.  We pulled over and they immediately started telling us to look up at the building. Many of the people were very frightened and were very excited about seeing what they had seen.

My partner and I look and see a large creature that was approximately six to six and a half feet tall and was very thin, if it had been a human it would have been emaciated. This thing was standing on top of the building and had what look like a pair of very large wings that extended out at least eight to ten feet from tip-to-tip. No discernible features, it just looked like a dark black shadow with wings.

My partner and I both thought it was somebody trying to jump from the building and maybe wearing a costume of some kind. When we both shined our flashlights to try to get a better look at what we were dealing with this thing took off into the air and flew away. At this creature flew away headed in southern direction something sounding like a scream came from it and within the matter of about 5 Seconds this creature was gone into the night. The people who for initially flagged us down had said that many people in the neighborhood had seen this thing for the previous two nights and this just happened to be the only time that it was seen in a stationary place. 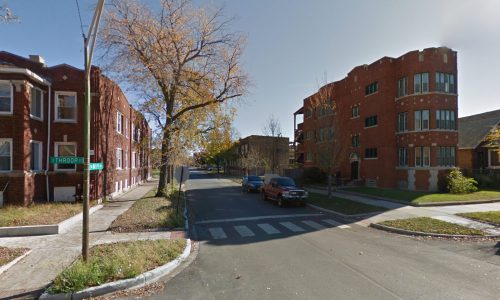 Intersection were the winged-creature was spotted.

We stood there stunned as this thing flew away and disappeared into the night.  We stood there and talked to the group of people who flagged us down,  taking information down any information regarding previous sightings from the nights before.  We initially were doubtful about filing a report because we thought we would be made fun of for seeing Little Green Men. We finally filed a report as we did not want to violate protocol. Nothing was ever said about the report being filed and as of right now it’s been business as usual.

We wanted to file this report because after I told my son the story he went online and showed me that this is not the only sighting of something similar being seen in the city. I showed my partner the day after the sidings and he said that he didn’t want to be involved and as far as he was concerned it was nothing more than a large owl or big bird that was misidentified. My son was the one who encouraged me to file this and do it anonymously to protect my identity.

There also have been several MUFON reports based in the Chicago area about a ‘humanoid flying creature’. One of the latest, a police office from Chicago ran into something otherworldly while on late-night patrol in Chicago’s southside. Roger Marsh reports the following MUFON case# 83325:

The witness was out on Lake Michigan with her husband and two other couples celebrating a friend’s birthday.

“We were about two miles out on the lake, just off of Montrose at about 10 p.m.,” the witness stated. “We were enjoying ourselves when I happen to look up and saw what looked like a giant bat, and not like a fox bat (which I looked up and saw was the biggest bat). This bat was as tall as my husband, who is 6-foot, 4-inches, or even bigger.” The witness described the creature.

“It was solid black with eyes that seemed to reflect the moonlight. This bat was blacker than the surrounding night sky and was perfectly silhouetted against the moonlit sky. This bat circled the boat three times in complete silence before heading off towards Montrose. It quickly blended into the night sky and was gone in seconds.”

About five minutes after seeing the creature, the same witness saw a bright green object traveling north to south at the horizon.

“It was not a plane as it was brilliant green and was moving slowly across the horizon. If I had to estimate, it was about two miles from our position. After the object was out of sight, we sat there looking around in stunned silence. I began feeling this overwhelming sensation of dread and told my husband that I felt that it was prudent that we get off the water as quickly as possible. I tried to get a picture of the thing as it circled our boat, but all I got was black.”

“As we talked about work and our families, we heard what sounded like a bird flapping its wings,” the witness stated. “One of my homies yelled out that he saw a huge Lechuza over by the road.”

The Lechuza is a Mexican urban legend or myth about an old woman who can turn into a giant, black bird.

“We walked over there and saw what looked like a big owl. As we walked up on it, this owl stood up on two feet and looked right at us. We saw what looked like a huge Lechuza, except it was about six feet tall and really big. It had large glowing red eyes that were completely freaking everybody out. We all yelled and this thing took off into the air and took off toward North Avenue This thing freaked us all out and scared all our kids.”

I’ve been seeing reports of strange humanoid creatures in the Chicago area for years now. However nothing like the vast number of sightings that we’re seeing this year. Whether you believe in the Mothman or flying humanoids one thing’s for certain: The people in Chicago are seeing something strange in the night sky.

There’s also an interactive map being compiled by my friend over at Phantoms&Monsters of all the sightings of the “Chicago Phantom” or Man-Bat in the last few years.

Phantoms&Monsters has a follow up to the 81st & Throop street sighting. A second witness came forward to corroborate the officer’s story:

I’m grabbing the popcorn and waiting for all this to unfold.