A Flying Horse In West Virginia 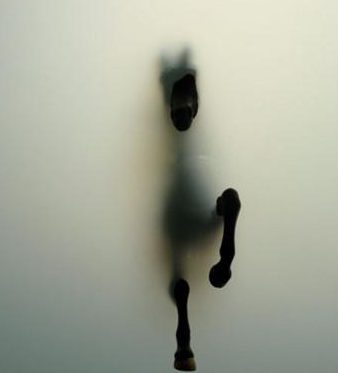 In July of 1878 the New York Times wrote an article titled “What a West Virginia Farmer Saw.” The article talked about a telegram that had come from a small town in Parkersburg, West Virginia and addressed to the Cincinnati Commercial Tribune in regards to a terrifying event witnessed by a couple of farmers early one evening.

It was around seven o’clock on a cloudless evening that a farmer happened to glance up at towards the sky. Taking a break from his plow, the farmer noticed something dark in the sky off in the distance. An opaque object that seemed to be floating towards him and a group of other farmers. The other men were too busy tending their crops to have noticed it at first. Standing in a mute confusion, the farmer tried to make sense of what he was looking at off in the distance.

As the object got closer, it became clear that what the farmer was looking at was a horse “swimming in the clear atmosphere” high above the men in the fields. Stunned, the farmer rubbed his eyes in disbelief. The horse appeared to be thrashing it’s head and neck from side to side while kicking violently as it continued to ascend at about 45°.  There was nothing on or around the animal that would explain how it ended up in that frightening situation. All the farmer could do is stare helplessly as the animal kept ascending higher. It was at that point that he called out to the other men in the field and asked them to look up. The men glanced towards the sky and caught the awful sight of the animal floating towards the growing darkness in the sky. The men, frightened to the core, were later able to describe it as a white horse swimming in the sky.

What happened in those fields that fateful summer evening? A hoax? Mass hallucination?  If it was the product of a mass hallucination, then why did the men all see the same image? Or could all this have been just a hoax? A gag pulled on the Cincinnati Commercial Tribune by a group of bored farmers?

Or maybe what the men witnessed that night was something not of this world.  What if what they saw was an abduction, a horse abduction in 1878. Abducted by an unseen UFO craft high above West Virginia.

Whatever the case was, the New York Times July 8th, 1878 edition chose to print this intriguing, yet terrifying report from West Virginia. 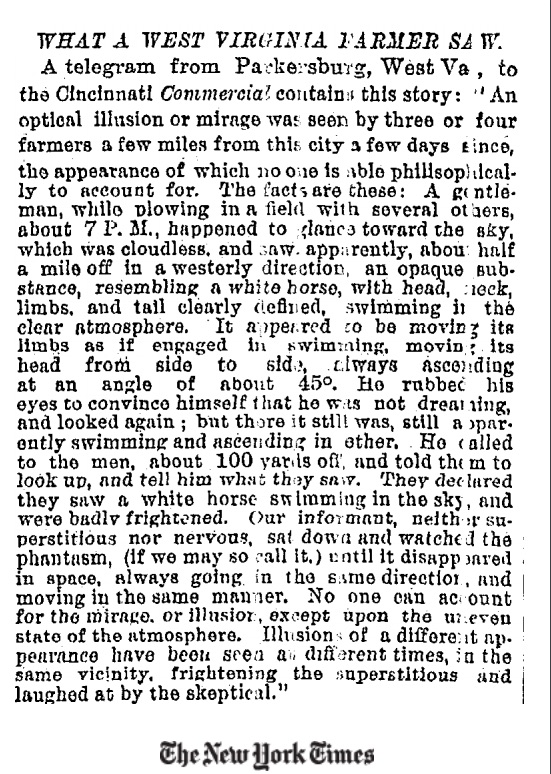 An optical illusion or mirage was seen by three or four farmers a few miles from this city a few days since, the appearance of which no one is able philosophically to account for. The facts are these: A gentleman, while plowing in a field with several others, about 7 P.M., happened to glance toward the sky, which was cloudless, and saw apparently, about half a mile off in a westerly direction, an opaque substance, resembling a white horse, with head, neck, limbs, and tail clearly defined, swimming in the clear atmosphere. It appeared to be moving its limbs as if engaged in swimming, moving its head from side to side, always ascending at an angle of about 45°.

He rubbed his eyes to convince himself that he was not dreaming, and looked again; but there it still was, still apparently swimming and ascending in ether. He called to the men, about 100 yards off, and told them to look up, and tell him what they saw. They declared they saw a white horse swimming in the sky, and were badly frightened. Our informant, neither superstitious nor nervous, sat down and watched the phantasm, (if we may so call it,) until is disappeared in space, always going in the same direction, and moving in the same manner. No one can account for the mirage, or illusion, except upon the uneven state of the atmosphere. Illusions of a different appearance have been seen at different times, in the same vicinity, frightening the superstitious and laughed at by the skeptical.