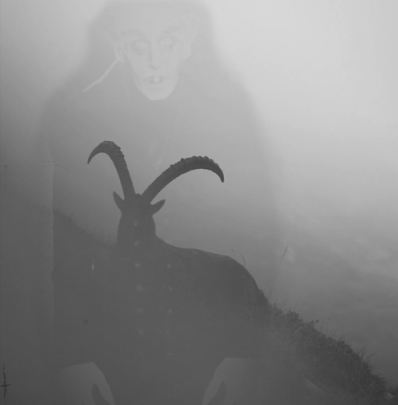 It was the early 1800s, on the Greek island of Crete, where a shepherd was tending to his flock of sheep and goats one cloudy evening. The story goes that as the sun began to set, so did a storm. Finding himself miles away from his village, the shepherd took refuge in an abandoned church he came upon. Inside he found warmth and shelter from the rain. Setting down his belongings, he crawled on top of a tomb and made it his temporary bed for what was to be a long and cold night.

The rain kept pouring down, picking up as the wind howled past the trees and seeping into the cracks and crevices of the unattended church. Tired, but relieved to have found shelter, the shepherd began dosing off into a much needed sleep. Soon, he was awoken by a soft thump. He sat up and looked around but all was quiet except for the low howl of the wind. That’s when he heard it. At first it was barely audible, a whisper entwined with the howling wind. Then he heard it clearly:

“Friend, get up!” a voice said. Looking around, the frightened shepherd couldn’t see where the voice was coming from. “Friend…get up hence, for I have some business that requires me to come out…”

The shepherd, by then trembling in fear, held his breath…keeping as quiet as possible. “Friend! Get up!” said the voice again. This time he heard the voice come from within the tomb he had been lying upon. “Get up! for I have to come out!” said the voice. Shaking, the shepherd still did not answer it.

“Friend, get up!” the entombed voice commanded.

The shepherd knew it wasn’t a voice from a fellow human but rather a Katakhanas, the undead. He meekly responded “I shall not get up hence, friend, for I fear that you are no better than you should be and may do me some harm.” The voice then said: “Friend, get up!”

“If I must get up, swear to me by your winding sheet that you will not hurt me, and on this I will get up.” said the shepherd.

“I will not harm you.” said the voice. Upon this, the man stood up and moved away from the tomb and out came the creature from inside. A Katakhana. “Friend,” it said. “you must not go away, but sit down here; for I have some business which I must go after; but I shall return within the hour for I have something to say to you.”

The shepherd, knowing well that he was at the creature’s complete mercy, obliged. Staying put inside the church while the creature made its way outside into the dark, and rainy night. Moments later, the creature returned like it said it would. This time, it had in its hands a fresh liver which was drenched in blood. It told the shepherd that he had killed a newly-wed couple and taken the liver from one of his victims. The creature put the liver onto this lips and blew into it, inflating it to a larger size. Doing so, the liver cooked itself as if it had been set upon a roasting fire. “Let us sit down, friend, so that we may eat.”

Fearing he might be next, the shepherd sat down and pretended to eat a piece of the liver. He dropped it into his shirt instead of his mouth and ate only a piece of bread he had with him. As he watched the creature devour the liver, the old man sat in disbelief, hoping not to be his next meal. To his surprise, the creature kept its word, saying to him “Friend, this which you have seen, you must no mention, for if you do, my twenty nails will be fixed in your children and yourself.”

Vowing not to do so, the shepherd was released by the Katakana. Guided only by moonlight and memory, the old man made his way back into the village of Kallikratis that same night. Upon morning, the shepherd was still in shock when he managed to tell the local priests and others about his terrifying encounter in the mountain the night before. A mob quickly formed and made their way back through the woods to the abandoned church. There, just like the shepherd had told them, was the tomb of the supposed creature. They pried it open and found the fresh corpse of a man; just as he had been, when he was buried years before.

To the priests and villagers, this was the sign of a Katakhana. The creature that had been killing and terrorizing the local villages. They took the body, stacked it onto a large pile of wood and set it on fire. As the body burned, the shepherd made his way through the gawking crowd to see for himself the destruction of the evil creature. As he stood and watched, a drop of blood from the creature’s remains fell onto the shepherds exposed foot. Instantly disintegrating part of the man’s foot, as if it too had been immolated by the fire.

The above story was based on the oral accounts collected by English traveler and Economist, Robert Pashley, in his book “Travels in Crete” published in 1837. Pashley recorded the story while talking to villagers in the remote village of Kallikratis, Crete. The island, one of the largest in Greece, is full of tales of the undead coming back to life to seek revenge on villagers. In fact, Greece is riddled with the Vampire folklore. Similar stories like that of the shepherd are peppered all across the European continent.These being the precursors to the modern day Vampire stories.

In Crete, they were known as the βρυκόλακας, Broucolack, or Vrykolakas. The names for these demonic creatures varied depending of what region of the country you were in. The famous island of Santorini is now known for its whitewashed houses stacked along the cliffs that hang over a caldera that was created from an erupting volcano 3,600 years ago. However in the early 19th century the island of Santorini was known for something else. It was the place were villages would ship off the corpses of people which were presumed to be a Vrykolaka to roam endlessly on the isolated Greek island. The island of the damned.

I’ve visited the island of Crete and Santorini several times and have seen the remnants of these old stories. Homes with strands of garlic bulbs hanging around doorways and black painted crosses on doorways. The latter being more of a ‘good luck’ charm, however one has to wonder if this was because of the Vampires that onced roamed the islands. In fact, it’s said that a Greek should not answer a door on the first knock, as a vampire never knocks twice.

Whether you believe in the Greek folklore or not, think about it when you visit a Greek island while on vacation. They say that there’s always a kernel of truth to every folklore.