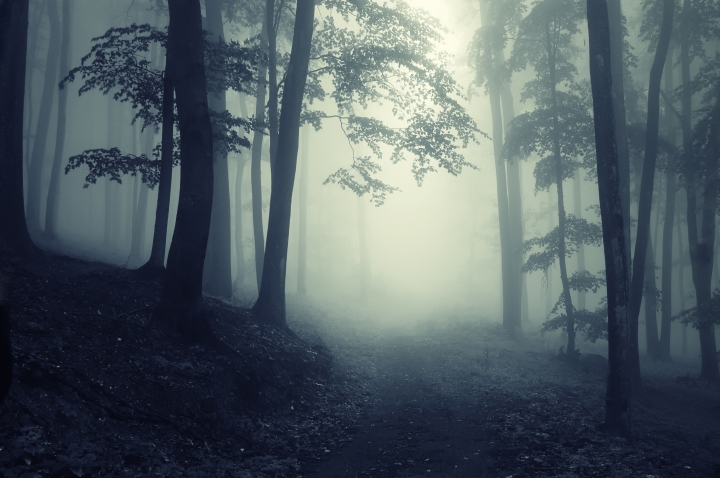 Taking a break from our usual articles, we’re posting a fictional short story sent to us by our friend William P. Robertson from TheHorrorHaven.com. Enjoy!

WIDE SPOT IN THE ROAD

Gus Carlson reined his team of horses to a halt. Staring ahead down the desolate one-lane forest track, he could feel his scalp tingle as he contemplated the hemlocks that hemmed him in like the walls of a grave. Even on the brightest summer day it was an eerie road to travel, for little sunlight ever filtered into the narrow tunnel of trees. Today, Gus felt especially uneasy as he watched the thunderheads gather in the dark sky above and listened to the howl of the rising wind. The horses seemed to share the farmer’s uneasiness. Pulling a loaded buckboard up a five-mile grade should have tamed even the most spirited of animals. Yet, Gus suspected that the heavy lather on the black mare’s flanks wasn’t entirely due to physical exertion. The beast’s nostrils were just too unnaturally flared as it stared off wild-eyed into the gloomy wood. Even the gentle gray rubbed uneasily against the traces and had to be prodded forward with an unusual amount of coaxing.

When the animals finally plunged ahead through the tunnel of trees, they broke into a full gallop. The buckboard jolted wildly down the slope with the farmer yanking the reins and crushing the brake for all he was worth. It wasn’t until the frenzied beasts had bolted to the top of the next hillock that Gus managed to bring them under control. Despite the biting October wind, Gus discovered that he was soaked with sweat.

Perspiration poured from under his hat band and dribbled onto his spectacles. With annoyance, he peeled off his glasses, mopped a coarse handkerchief across his forehead, and then proceeded to survey the distance with near-sighted eyes. From his hilltop vantage point, he could barely distinguish the blurry road ahead as it threaded its way across an infinite series of lower hillocks that rose like waves from the hemlock sea. When Gus replaced his spectacles, he noticed an ant-like vehicle moving toward him up the road three knolls away.

As Gus watched the other vehicle disappear behind the second hill, he wondered how they could ever pass on a wood-lined road barely wide enough for his own buckboard. This thought had little time to register before Gus saw the object of his concern miraculously appear atop the second knoll. This time Gus had no trouble identifying the mysterious coach. It was somber, black, and unmistakably a hearse! It was drawn by six gigantic black draft horses that trotted along as if in a trance. How the brutes were able to pull that hearse three miles in three seconds was something Gus didn’t care to ponder. Instead, he urged his own trembling team forward. Shortly after, to his surprise, he found a place to pull off the road and await the distant coach’s arrival.

When the hearse disappeared behind the remaining hillock that separated them, Gus wondered why in ten years of traveling to market he had never before noticed this particular wide spot in the road. Nervously, he pulled at his beard and then at his watch chain. He produced an initialed timepiece that had been a gift from his eldest son, Herbert. The watch read one o’clock. It had to be later than that, Gus thought. He held the watch to his ear. It wasn’t ticking. Had he forgotten to wind it that morning in his haste to get an early start? Gus twisted the winding knob and found it wouldn’t move. While he replaced the broken timepiece in his pocket, a distant rumble of thunder made his horses fidget in the traces.

Gus waited for what seemed like an hour. When no vehicle appeared atop the distant knoll, the farmer muttered, “Where could that hearse have gone? There’s no side road it could have taken. And this one’s not wide enough to turn around on.” The winds rose to gale force and snatched Gus’ hat from his head. As he whirled around to save it, he gasped in surprise. There, disappearing over the horizon behind him was the somber, black coach for which he’d been waiting.

Suddenly, the black mare reared up on its hind legs, and the gray emitted an almost human shriek. Gus barely had time to grip the reins before his team was off and running. It never slowed until the dirt track blended into the brick highway leading into Gus’ own gate. When the buckboard swirled up the drive, Gus’ wife appeared at the front door of the homestead. Her face was wan and etched with sorrow. Visibly shaken, the farmer got down from the wagon and walked absently toward his trembling wife.

“Gus,” she said blankly. “I have something to tell you.”

“Yes, why yes!” sobbed Gus’ wife, burying her head on his shoulder. “How did you know?

How could you know?”