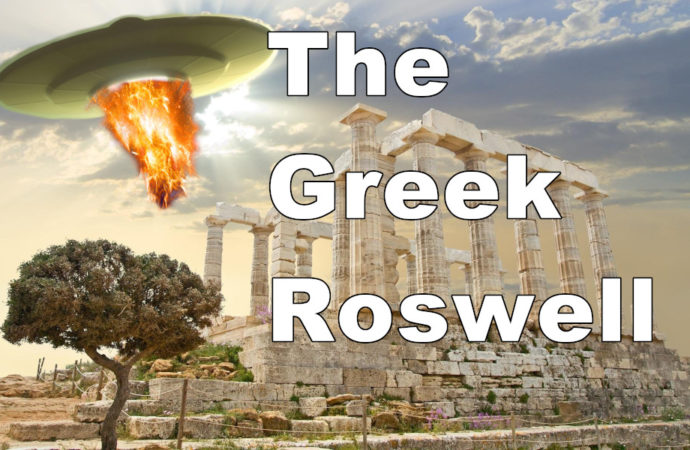 Megaplatanos is a small village situated an hour and a half drive just outside the city of Athens, Greece. Like most Greek villages, it is home to mainly shepherds and farmers that toil in the fields and mountains from dawn to dusk. On September 2nd, 1990, around 9 at night, half a dozen strange lights were seen in the sky by a few villagers who happened to be outside and looking up at the sky. It was a group of 5 or 6 unidentified flying objects coming in from the north, with one of the aircraft flying erratically. The witnesses claimed to see strange lights being omitted by the craft in trouble, forcing it to loose altitude and eventually crash into the side of a nearby mountain. The crash in Megaplatanos is known as Greece’s own Roswell incident.

The unidentified lights were first spotted flying over central Greece. As the reports state, around this time there were a dozen or more of these crafts flying across the sky. They were seen flying near Mount Pentelicus and heading north, past the city of Thessaloniki. At some point, the crafts changed course and headed south towards the Peloponnese region. It was here that, once again, they switched course and headed back towards central Greece. At this point, one of the UFOs appeared to change colors and began flying erratically. As the objects approached the village of Atalanti, the UFO in trouble descended at a rapid rate and eventually crashed on the southern part of the small hill named Tympristos (or Tymfristos), which is situated a few kilometers outside Megaplatanos. A small church, know as the church of Prophet Elias, sits on the peak of this hill, overlooking the village. Just meters away from the church is where the object was said to have crashed. This was around 9:30 P.M. on a Sunday night.

Those who saw these objects, mentioned seeing them dip down from the sky towards the downed UFO and shoot back up into the sky. To some, it appeared as if they were operating in an organized recovery mission.

The Karadratu family first saw the bright lights illuminating the dark sky for about fifteen minutes. They then heard three loud explosions before noticing that one of the flying objects had grown brighter and closer than the rest. To them, it looked as if it was damaged or was on fire as they watched it crash about a kilometer away from their home. “After falling, the object made black smoke, like that of burning tires. After a while, the other objects descended near the grounded craft and landed around it, as if encircling it.” The lights of the other objects were so bright that they illuminated part of the hill.

“We were standing there, watching. My husband and I went closer for a better look. He could see movement in front of the burning object, like shadows that passed back and forth but we could not discern if they were human or something else. They (the shadows) did something in the bright circle that formed around the big object. They stayed there from about 10 o’clock sunday until about 3 A.M. Monday.“

According to Mrs. Karadratu, they only felt comfortable getting closer to the crash site once the sun had come up. When they did investigate, they came upon an area with scorched earth and few scorched pine trees. One of those trees had its lower trunk scorched as well. When Mr. Karadratu touched the tree, his had blistered up within seconds. Where it appeared that the impact had been, they both saw two small holes in the ground. Near or inside the holes, the Karadratus found a strange small circular object with what appeared to be two antennas on it. It also had engraved on it a symbol resembling a lightning bolt.

The Karadratus reported seeing beings from a distance, but were not able to confirm if they were human or not since they were about a kilometer away and the bright lights and fire made it almost impossible to discern certain anatomical features. However they knew that these beings or shadows were moving around the damaged craft in a hasty manner.

The Fthiotida Police was soon on the scene. The word had spread throughout the village of strange lights and possible crash near the church of Prophet Elias. Upon initial investigation of the scene, they could only observe what appeared to be remnants of a brush fire. When the police confronted the Karadratus, who had been on the scene since early that morning, they were given the circular object which they had found.

Besides the scorched earth and the object given to them by the Karadratus, the director of the police department, Mr. Panetsos, found no indication that there had been an actual downed aircraft. He enlisted the help of the deputy prosecutor, Mr. Zisimopoulos, who requested a full investigation of the supposed crash site. From this, various other metals were recovered, none of them were any bigger than 12 centimeters. The items were shipped off to the Tanagra Air Forice Base which is located about 90 kilometers south of the crash scene.

The Tanagra AFB concluded that they items “were not worth anything” and that they probably were pieces from an old fighter jet. However the Air Force Research & Technology Center (KETA-ETHM) visited the site and came up with a different conclusion. On October 19th, 1990, their report on the incident stated:

“We certify that the object in question burned grass and shrubs within a radius of 200 meters. The debris collected was as follows: Pieces of an 11cm diameter female plug made of copper and with Arabic numerals in its center. A series of copper multipin cables, connected to the aforementioned plug. The insulation of these cables was made of silk, such as cloth and teflon. A burnt rubber circular cover. A steel ring. Three 10cm steel bars each. At the bottom two regulators with the Greek letter F at their base. The debris found was of earthly origin, given that there were numerical and alphabetical indications. It was old technology, possible pieces of an old satellite. This conclusion was based on measurements, wiring and construction. The satellite must be from Europe or the former Soviet Union, as only in these parts of the world is the metric system in meters and centimeters. On the letter F, it is from the Soviet Union since that country uses this Greek letter in its Cyrillic alphabet and also has the technology for such a device.“

Many Greek Ufologists rejected the theories of a downed satellite or that the metals were pieces of an old jet fighter plane. Socrates Ekaterinidis was one of them. He wrote in several publications and spoke out about the incident in several Greek radio interviews. He argued that KETA-ETHM’s claim of a downed satellite had no evidence since there had been no wreckage found or even a small impact crater. He also argued that the Air Force Base had omitted the fact that one of the objects had a strange lightning bolt insignia on it. Why they had omitted this finding further added to his speculation of a military cover-up or shoddy investigative work. As for the Greek letter F that was on the metal objects, Mr. Ekaterinidis claims that the police did not see any type of lettering on the metals.

To add to the mix-match of information, the director of the Astronomical institute of the National Observatory of Athens released a statement claiming that this was nothing more than a meteor crash. Mr. Makris never set foot on the site or investigated any witnesses or police records. Yet he released the following statement:

“These are not just extraterrestrials. At this time (September 1990) the orbit of the Earth passes near a flock of meteors, the so-called Persians. These meteorites, as they enter the Earth’s atmosphere at a height of about one hundred kilometers, due to their high speed, develop a high friction and ignite. So the world sees flashes. When it comes to meteors, they may be artificial satellites. As many pieces of the satellite are destroyed, they also ignite in the atmosphere. Finally, the phenomena may also be due to abnormal refractions or reflections in the atmosphere from lights on the earth. Even the lights of a range of cars can cause such a spectacular sight. Everything else is devoid of seriousness and is due to fantasy or group hysteria.“

When asked by several UFO investigators, the Atalanti police mentioned that no investigating group ever took the testimonies of the dozens of people that witnessed the strange UFO lights and crash near the village of Megaplatanos. From what is known, only a few photographs taken by the police and karadratu family have been made public.

Unlike the 1947 incident at Roswell, New Mexico, the supposed UFO crash in Greece had almost no press coverage. This makes researching the case difficult as none of the original UFO investigators have shared their findings with the rest of the world. Greece, with its ancient splendor and rich historical and cultural accomplishments, has yet to fully embrace the modern age era. It’s the place I now call my home.

I moved to this country not too long ago, having lived in Los Angeles and New York City for many years. I do see this unwillingness to catch up with modern times as both a positive and negative. So it’s easy to see how in 1990 information about the supposed UFO sightings and crash could have been buried deep and forgotten over time. Most people that I’ve talked with about the crash in Megaplatanos had no idea that such event took place. Coming from a country with certain freedoms like the FOIA (Freedom Of Information Act) and freedom of the press, it’s a bit of a culture shock. I say this because the only information about this incident comes from some of the villagers that still live in Megaplatanos and remember that one September day in 1990 when the night was illuminated by strange lights across the Greek skies.