Imagine finding yourself aboard the famous most luxurious ship in the world, the Titanic, experiencing the fabulous man built ship that was described as UNSINKABLE. Unfortunately they were very wrong. 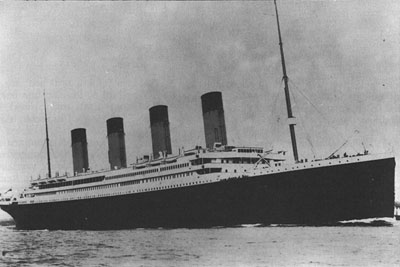 Aboard the Titanic was an on-board swimming pool, gymnasium, Turkish Bath, libraries in the first class and also second class, and a squash court. In her time, the Titanic was the most luxurious ship which surpassed rival ships Lusitania and Mauretania. The night was April 14th 1912 when the Titanic struck and iceburg during her voyage on a dark night within the icy waters in the Atlantic ocean. They say it took Titanic two hours and forty minutes for the ship to sink, leaving over 1500 people to freeze in the Atlantic waters. There were a total of 2,240 people on board when Titanic was bound for New York when an iceburg altered the Titanics final destination.

On 7 June 1994, RMS Titanic Inc., a subsidiary of Premier Exhibitions Inc., was awarded ownership and salvaging rights by the United States District Court for the Eastern District of Virginia. On August 22, 2008 the Georgia Aquarium in association with RMS Titanic, Inc., has featured the worldwide debut of Titanic Aquatic. The aquarium does have more than 190 artifacts. I read that all attendees are given a ticket with the name of an actual Titanic passenger.

If any of our readers has had the opportunity to experience this exhibit and would be kind enough to share a photo of this ticket, you are more than welcome to submit a picture of this.

A volunteer at the aquarium has stated “I think it’s the lost souls from the Titanic”. Margarit Mourino has reported ghostly encounters around the exhibit that contains part of the Titanic. “I could feel like this hand moving over my head and through my hair” said Margarit. A spokeswoman named Meghann Gibbons did state that the aquarium has received reports from numerous volunteers having encountered strange activity while working.

After hearing these stories, the aquarium cycle decided to invite “Roswell Georgia Paranormal Investigations”. The investigators spent two nights at the Aquarium in an effort to determine if the encounters were paranormal or had valid scientific explanations. “The investigators were rewarded with purported recordings of ethereal voices and sightings of shadowy figures roaming darkened corridors. They concluded that not only was the Titanic exhibit a spirit dwelling, so was at least one other part of the building.”

The Titanic exhibit’s last stop before Atlanta was Miami. Were there ghost sightings there? Miami Museum of Science spokesman Tony Lima responded in an e-mail; one could hear his sigh: “I wish.” But he rebuffed any ghost stories during the exhibit’s South Florida stay.
Other venues that have housed Titanic Aquatic, such as the Orlando Science Center, have reported strange occurrences similar to the ones at the Georgia Aquarium.

The group was broken into three teams to investigate three separate areas of the Aquarium – Titanic Aquatic, Ocean Voyager gallery and Cold Water Quest gallery. The three groups did not share their findings with each other until they had completed their investigation. When they all came back, the groups had similar results.

“An Aquarium volunteer who had a paranormal experience in the Titanic exhibit’s iceberg room was validated when investigators said that there was an older gentleman residing in the area. An elderly woman was also discovered in the First Class cabin of the exhibit. A young crew member in his early 20s was spotted and felt in one of the last rooms containing preserved dishes and clothing from the Titanic’s wreckage. As for non-Titanic apparitions, all teams sensed a Native American man in the Cold Water Quest hallway, which is outside of the new construction area.”

Although I tried to provide our ghosttheory readers with some sort of EVP’s of the investigation, I could obtain none. Could these be the souls of those that went down with the Titantic and have yet to find their resting place ? Could these be souls still emotionally attached to the Titanics artifacts and still holding on for an answer….