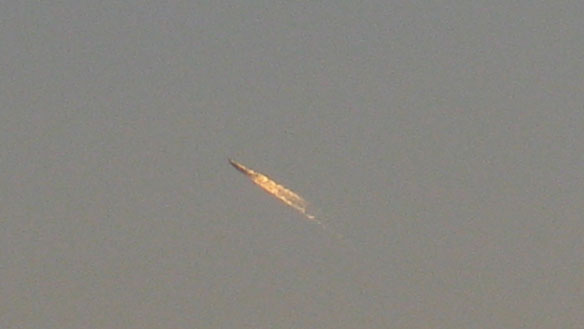 A rather interesting picture of a UFO taken over Harbour Mille in Newfoundland, has everyone questioning it’s origin. Apparently the object appeared to come from the water, making no noise.  Canadian authorities are mum on the issue.  The reigning consensus right now points towards the objects being test missiles being launched by the French submarine ‘Le Terrible’ (*chuckle*) towards the artic.

People who saw a missile-like object soaring through the sky over a small rural community in Newfoundland Monday night are getting no answers about what it was, although police say they’d gotten to the bottom of the mystery.

Darlene Stewart spotted the object while taking pictures of the sunset over Harbour Mille, a community of about 200 residents on the south coast of the province. She says she started snapping photos.

She then called her neighbour, Emmy Pardy, and the two women, along with Stewart’s husband, say they saw three similar objects flying through the air minutes apart, one up close and two farther off in the distance.

“I really did get sick to my stomach, I was shaking when I seen it,” Stewart told CBC News Wednesday. “We were just in awe of what we seen.”

The photos taken by Stewart show blurry pictures of what appears to be a long, round object, much like a missile, seemingly rising from the ocean, with either smoke or flames shooting out the back end.

Objects made no noise

“We confirmed that it was something,” Sgt. Wayne Edgecombe told CBC News Wednesday. But Edgecombe said he couldn’t reveal what the police investigation uncovered.

He said the focus of any police investigation is on whether something criminal has occurred.

“It’s nothing criminal,” he said, in relation to the unidentified object.

Edgecombe said he contacted the Department of National Defence and “they gave me some info,” but he said that it is up to that department to release the information publicly.

Defence Department officials said they were aware of the reports, but were waiting on a final report before commenting and that the RCMP were in charge of the investigation. However, the RCMP released a statement Wednesday referring all media inquiries on the subject to Public Safety Canada.

That department referred inquiries back to the RCMP.

The sighting has intrigued people in the Harbour Mille area, with some saying they were told by officers who were in the community Tuesday investigating the sightings, that the objects were test missiles launched from the nearby French islands of St. Pierre and Miquelon.

The French Ministry of Defence posted a message on its website confirming it had launched a missile from a submarine this week but the time and direction didn’t match with what was reportedly seen over the south coast of Newfoundland.

The suggestion that the object possibly involved the military has Liberal MP Gerry Byrne, who represents the Newfoundland riding of Humber-St. Barbe-Baie Verte, demanding answers.

“There’s a credible body of evidence,” Byrne told CBC News, “that suggests there’s something spectacular happened off of our shore. Before this goes any farther, I think the government needs to actually respond very quickly with a straightforward, factual statement.”

Was safety in jeopardy?

Byrne said if it was some kind of military test, then people should be told whether their safety was jeopardized.

“If indeed this was a man-made object, that it was a missile, was there any potential risk to health and safety from collateral damage should the missile fire have failed?”

Byrne used the mystery to take a shot at the federal government for proroguing Parliament. He said if the House of Commons was opened, he’d be able to question the ministers of defence, transport and public safety about the incident.

“It’s cloaked in relative secrecy,” he said. “And the only way to get around that secrecy is a special institution called the floor of the House of Commons.”

Stewart said Tuesday she has been overwhelmed by the number of calls she has received about the sighting. But she said nobody has told her officially what it was that she saw.

“I would like to get to the bottom of it,” she said.