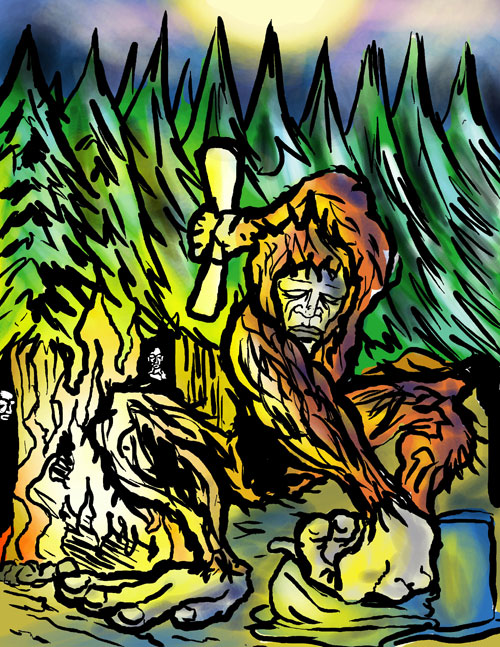 I ran across this interesting article over at The Battalion Online, Texas A&M’s online paper presence, written by Richard Creecy. Creecy makes some nice observations about historical sightings, and reasons for lack of evidence.

Sasquatch draws a metaphorical line in the sand and, like other “monster” sightings, beckons the masses to cross the line and assert their belief or stand in opposition to it. Upon reading the word “Bigfoot” most people automatically kick into one of two modes: rabid believer or dismissive.

The majority of people would fall into the dismissive scoffer category, but there are many misconceptions about the majestic primate known as Sasquatch. The perception most people have of Bigfoot exists only in grainy photographs and tabloid papers. Publications like the “Weekly World News,” who tout articles such as “I was Bigfoot’s Love Slave” paint the portrait that the Yeti exists only in the minds of crackpot loonies that photograph shadowy creatures in the more out of focus areas of the Pacific Northwest. But it might surprise you to know that Bigfoot sightings happen all over America, especially in Texas.

One of the first reports from Texas dates back to 1837 in the lower Navidad area, which is northeast of Victoria, Texas. In this encounter a group of men chased down a large furry bipedal creature, but their horses were reported to be so frightened they refused to get close, leading to the creature’s escape. The Karankawa America Indian Tribe, which once hailed from the coastal areas of Texas have stories that told of a tribe of hairy creatures that inhabit the woods that are now called the Piney Woods.

But the question still remains, why do so many people disbelieve so adamantly in the possibility of Bigfoot? Among the many arguments, two stand out in frequency. Some people will say that they cannot believe in a creature that has never been conclusively photographed or captured on video. But to answer this challenge, let us look to another elusive creature, the Colossal Squid.

The Colossal Squid was a creature chalked up to superstitious sailors, conjuring stories of a vengeful sea that held vast merciless creatures. Skepticism was rampant until 2007, when a live specimen was inadvertently captured by a New Zealand fishing vessel off the coast of Antarctica. Previous to this encounter the only evidence that existed was a few severely decomposed specimens – tentacles and beaks found mostly in the stomachs of Sperm whales.

Read more of this article at: The Battalion Online