Evidence of the Afterlife 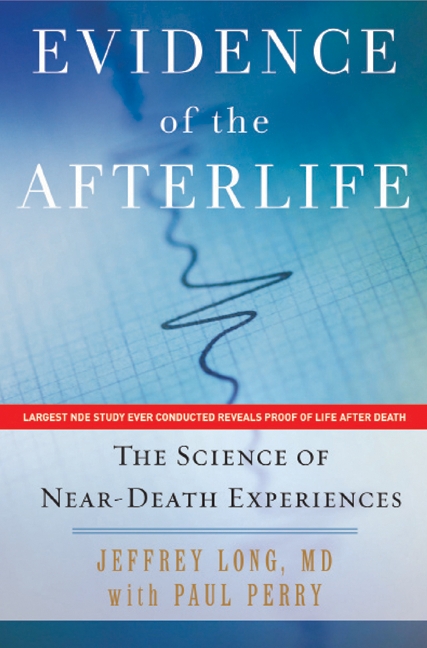 Everyone is afraid of death, and that is why death is portrayed in such a dark, evil manner in pictures and pop culture. We have all heard of Near Death Experiences (NDE) and of course people have had to wonder, true of false? Wonder no more! Dr Jeffrey Long has researched this issue, and has a book written about it called ‘Evidence of the Afterlife’, where he validates NDE’s and takes on the burden of proof issue. I’ll be looking to read this book soon. Anyhows, I picked up this story from the Skeptiko podcast, which is an excellent show to listen to, and you can also read the transcript of each show.

The conclusions of Dr. Long’s research are paradigm smashing for near-death experience skeptics who’ve argued that limited brain functioning may explain NDEs. “What near-death experiencers see correlates to their time of cardiac arrest and it is almost uniformly accurate in every detail. That pretty much refutes the possibility that these could be illusionary fragments, or unreal memories associated with hypoxia, chemicals, REM intrusion, anything that could cause brain dysfunction”, Dr. Long stated.

While some near-death experience researchers have been reluctant to make the leap from NDEs to proof of the afterlife, Dr. Long is convinced by his research findings, “I’ve gone over every skeptic argument I can get my hands on. At the end of the day, I have no doubt in my mind near-death experience is for real. It’s a profound and reassuring message that we all have an afterlife. Every single one of us. And it’s wonderful. It is probably the greatest thrill of my life to be able to carry forward that important message to the world. I wouldn’t do it if I weren’t absolutely convinced that it’s correct.”

The conclusions of this research will be controversial, but Dr. Long stands ready to take on the critics, “I would be delighted to debate any near-death experience skeptic, any time, any place, on any media, as long as they’re scholarly, well informed, and as long as it can be a very high-level, intellectual debate.”

Jeffrey Long, M.D., is a physician practicing the specialty of radiation oncology (use of radiation to treat cancer) in Houma, Louisiana. Dr. Long has served on the Board of Directors of IANDS (International Association for Near-Death Studies), and is actively involved in NDE research. His book, Evidence of the Afterlife (HarperCollins), was published in 2010.

Read the transcript or listen to the show here