Some of you may know that Justin Smeja, the now infamous shooter of the alleged Sierra Kills has recently taken a polygraph examination.

The exam was carried out on Tuesday, August 7, 2012 by Jeanne Hobbs, who Bigfoot Evidence describes as a qualified examiner who seems to have a pedigree in the field as long as your arm. Of course you can take that any way you like.

Justin was asked a litany of questions. He was not under the influence of drugs or alcohol and was not aware that the test was to take place that day.

Lets see how this all played out:

Here is the official results for Justin Smeja’s polygraph test on August 7, 2012. Team Tazer Bigfoot’s Ro Sahebi found one of Sacramento’s top polygraph examiners to perform the test. This person has 10 years of experience as a polygraph examiner, has a degree in criminal justice, and is a licensed private investigator. She is also a member of PEOA (Polygraph Examiners Of America) and CAPE (California Association of Polygraph Examiners). Justin, Carl Olinselot, and Ro spent the night at my house and the questions were not revealed to Justin and the polygraph examiner until Tuesday morning.

The questions were pre-written by Bart Cutino, who’s been investigating this incident for the last year and has a Bachelor’s Degree in Criminology/Law Enforcement at University California State Fresno. Some additional questions were added by Ro Sahebi, a film producer from Los Angeles. The examiner’s identity will be released upon request. This means we will release her identity to anyone who wishes to get in touch with her for interviews.

To our knowledge, the type of polygraph we chose cannot be faked. It has a 99 percent accuracy and it uses the same technique used by the military. Justin passed 100%. He was not intoxicated and did nothing to prepare as we were together for the 24 hours before the test. Also, he was not aware that the examination was actually going to happen. He thought we had canceled it.

There are two types of results. The first one can contains the questions and the results. The second results contains a 7-point scale adjacent comparison tracing that includes Justin’s respiration, electrodermal, and cardio. Both results indicates “NO DECEPTION”.

[Update: Question #3]
Question #3 has a typo. The examiners question to Justin was “When you first saw this “animal”, did you recognize it as an animal you had never seen before or even knew existed?”. Bart Cutino verified with us that this was the way he had worded the question and Ro Sahebi reviewed the footage to make sure that this question was the one posed to Justin.

Well, according to the results as reported by Bigfoot Evidence, Justin passed and was 100% truthful.

Many of you may be wondering if it’s possible to beat a polygraph and the short answer is yes. As George Castanza once said to Jerry, “If you believe it, then it’s not a lie”.

While I did say that Justin didn’t know the polygraph was going to take place, he did know it was going to happen at some time in the near future. Therefore, he did have time to prepare and if I were perpetuating such a saga and purportedly had a book coming out, I’d do everything I could to prepare. Even if a polygraph subject is being truthful, mere nerves can cause false readings on a polygraph.

Furthermore, even the Federal Government has admitted that the polygraph can be beaten:

The federal government has for the first time admitted publicly that it’s “standard for truth,” the polygraph, can be beaten. The proven and simple steps to defeat the polygraph are now public knowledge and contained on a number of Internet websites. In a recent case, undercover agents were trained to successfully beat the polygraph. The following article provides details of this polygraph failure: Polygraphs tested mettle of agents in biker case

Additionally, at the start of the Iraq War, the Washington Times (Tuesday, July 22, 2003) disclosed that Saddam Hussein loyalists were very adept at beating the polygraph. As stated in the Times, “US officials and military officers say trained interrogators in Baghdad have caught Iraq Ba’ath Party loyalists lying while hooked up to the polygraph machine, which showed they were not lying.” The article went on to say that many of these individuals were trained how to “beat” the polygraph. Such techniques have been taught for a number of years by foreign enemies of the US. This has led to major failures in US polygraph operations.

More on this story here

It seems incredible that some law enforcement agencies as well as the U.S. government continue to rely on the polygraph as a truth verification tool in spite of the very high profile and notable failures of the device. This is especially true in light of the recently published report by the National Academy of Sciences. The NAS conducted a study of the polygraph that was commissioned by the U.S. Department of Energy. In most of the studies of the polygraph that the NAS reviewed, they found that the Department of Defense Polygraph Institute (DoDPI) and their affiliates manipulated the studies to indicate a high accuracy rate. In fact, the NAS recommended that the DOE discontinue conducting polygraphs, as they are prone to very high error rates. The NAS report stated: “Issues of conflict of interest reflect a serious structural problem with polygraph research.” Some of the very notable failures of the polygraph are:

The Washington Post reported that one week before Saddam Hussein’s sons were killed in a shoot out, an individual came to military intelligence and told them that he knew where the sons were hiding. He was given a polygraph test concerning the information. He failed the polygraph and was sent on his way. One week later, the owner of the house that the first individual had identified came and said that the sons were hiding in his house. Special Operations personnel took the house down and killed Hussein’s three sons that had been hiding in the house for some time.

The Washington Times reported an individual in Iraq that was involved in the weapons program was shown two pictures. In one, officials cut his image out of a photo of workers at a weapons factory. He agreed that the cutout image was of him. They showed him the full photo, with his image restored. This time, he denied that he was in the photo. When given a polygraph concerning that issue, the polygraph did not catch him in this blatant lie.

Many of the Iraqis that gave pre-war intelligence on weapons of mass destruction were given polygraphs to validate their information. Most all passed and the information was accepted as valid. It was later learned this information was not accurate.

CIA Analyst, Larry Wu-tai Chin also regularly passed polygraph examinations before he was arrested for being a spy for China.

In 2004, detectives suspected Kevin Fox of the molestation and murder of his four-year-old daughter. Fox agreed to take a polygraph exam, which he was told he failed. He was then interrogated and as a result, he confessed. Fox spent eight months in prison on a capital murder charge before DNA evidence cleared him.

In 2002, an Ohio court officially cleared Jimmy Williams after he spent 10 years in prison for the rape of a ten-year old girl. Because the defense attorney had stipulated to allowing the results of the polygraph tests to be admitted into court, the jury had heard that he failed the polygraph and convicted him. The now 22-year-old accuser admitted that the rape never happened.

To get more on this article as well as read the PDFs provided, please see story continued here

As much as I’d like to accept Justin’s results, the fact remains, he did know it was coming at some point, which gave him time to do plenty of research and prepare for the test. By providing the above reports, I am in no way suggesting he tried to cheat the poly, it just points to the realization of possibility for someone who is capable and prepared.

It’s a matter of asking yourself if you believe Justin adept enough to foil such a machine or not and without knowing him personally, that’s a tough call.

Now lets look at the actual questions and results: 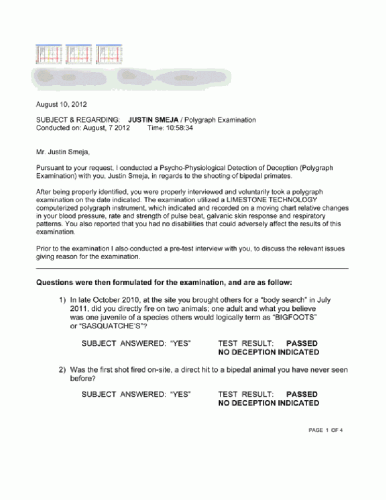 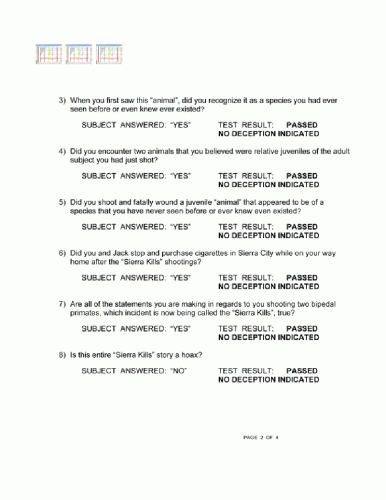 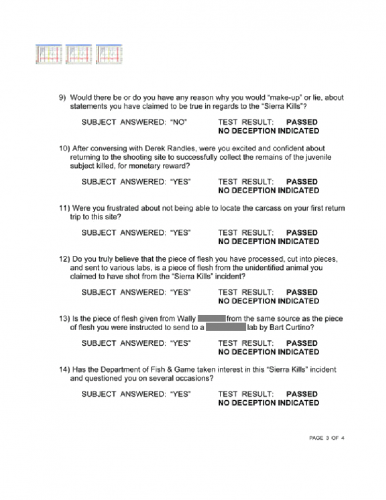 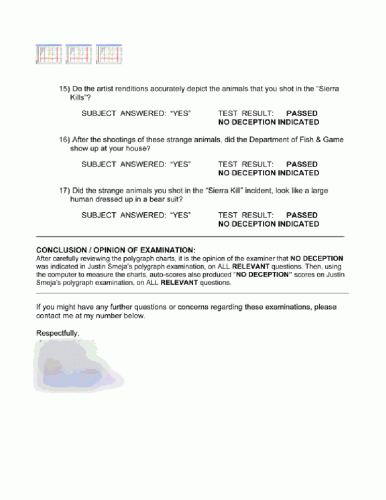 And finally we move on to the part of the test that monitors heart rate, respiration, etc… 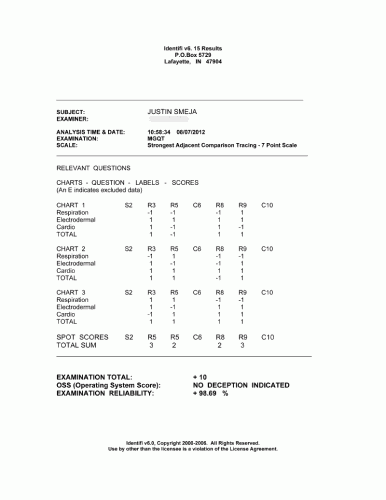 So, there you have it! Read carefully and decide for yourself.

It certainly does seem as though Justin is hell bent on proving he shot two hairy biped creatures during that bear hunt.

Of course this does have plenty of backlash from the “No Kill” camp and they have made their feelings known from the start of all this.

To top it off, Rick Dyer has recently filed a report with the California Department of Fish and Game against Justin.

You may remember Rick as one of participants in the Georgia Bigfoot Freezer fiasco. Rick has been trying to live it down ever since. Not only that, but he apparently wants people to notice him and if you are at all on board with the hunt for Sasquatch, then you’ve likely noticed some of his “look at me” incidents.

I don’t know what could come of Rick’s filing and to tell you the truth, I can’t see anything happening to Justin over such a report. The bottom line is, polygraph’s and tissue samples are not going to prove anything.

Which brings our Merry-go-round right back to where we started. The only proof positive will be a dead body or a captured specimen.

Well, here it is in full color, the polygraph video. Now this is getting interesting.

Thanks to The following sources: